The bright frosty morning had Fetcham dog walkers were out in force, as I arrived at the Bockett’s Car Park.  It had also attracted a good crop of Moles. 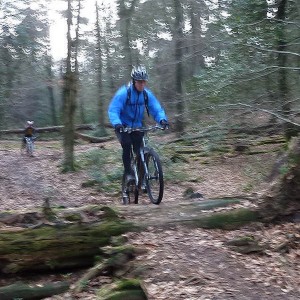 Dave C, Tony, Dave W, Bike Tech Mark, Mark’s brother Gary (I think?), Paul, Canadian Rob, Ray, Kevin and Andy 661 made eleven of us – sorry if I missed anybody out.  And there was the promise of picking up another along the way.

With Leith Hill in mind, we took the usual Admirals Track, the dive below the two bridges, then up past Yew Trees to Ranmore. The ground conditions were excellent as the frost had worked its magic on any lingering mud. But I was feeling my lack of moleing these past few weeks, barely keeping pace with Paul who seemed very relaxed as he breezed to a halt by the road, with Dave W right behind.  After Landrover and Hole Hill, we took the Rockery Climb and just as we regrouped on Wolvens Lane we were joined by Jem – perfect timing.

The bombholes above Coldharbour were in great condition and my sense of well-being was boosted by the dappled sunlight through the trees we made our way to the Cricket Pitch.  Dave W led us on through his back route to the bottom of the Leith Hill climb, and before long we were propping up the bikes and digging in pockets for change.  The sun was shining out of a blue sky, but the north east wind had a Siberian chill and was gusty enough to topple some of the bikes, so everybody huddled against the south wall of the tower for tea and cake.

Dave C ran into one of his old acquaintances, Lee, who had just arrived from Holmbury with the claim that “Yoghurt Pots is as good as it’s going to get before the summer”.  So we headed off to High Ashes Farm, led by Dave W through Windy Willows, some superb single track northwest of the tower.  That alone would have made for a great day’s ride, but after High Ashes came a brilliant blast down “The Mother”, leading out to Holmbury.

The first part of the climb – to Holmbury Cricket pitch – is always a grind, and at the five ways crossroad some of the moles took a well earned breather while a few pressed on to take in Yoghurt Pots.  Conditions were pretty good, with a couple of puddles to skirt around in the deeper pots, but the real challenge was avoiding the dad and two young sons gingerly walking their bikes.  My guess is they were about 5 and 7 years old – I don’t know whether to sympathise with him starting them off on his favourite trails, or to think him mad for taking “start ‘em young” to a new level. 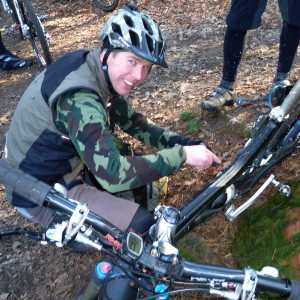 Telegraph Road was in good form, after which we waited whilst Bike Tech Mark cadged some tools to sort out a few problems involving cable ties.  After the drop into Holmbury Village Hall, Dave C led us along the track by the Volunteer to Abinger Roughs and the bottom of White Down.  That was where the moaning started.

To be fair, the clay field after the railway bridge was particularly claggy, but when I suggested White Down was the best route back to Ranmore I was thinking about how crisp it was early on the frosty Saturday morning.  Unfortunately the Sunday sunshine had melted the mud, and the whole climb had become one long clag-fest. That didn’t deter Paul and Dave W who were clearly in good condition today, but as various other moles slowly appeared there were views expressed that a more Mediterranean style route choice would have been better.

By now the distance and my lack of fitness was starting to tell, and I found the muddy slog along Collarbone draining, so when we started back down Yew Trees I coasted along as Dave W and Paul disappeared into the distance and by the time I arrived at the top of the two bridges, I knew I was running on empty.  As everybody regrouped it became apparent that we were missing an unlikely tail ender – Tony.

Everybody welcomed a few minutes rest but eventually the cold wind started to take its toll so two kind volunteers, Andy 661 and Kev, headed back to see what had happened whilst the rest of us headed home.  Subsequently it turned out that a flint had cut one of Tony’s tubeless tyres, so patching and use of an emergency inner was required before he finished the ride.