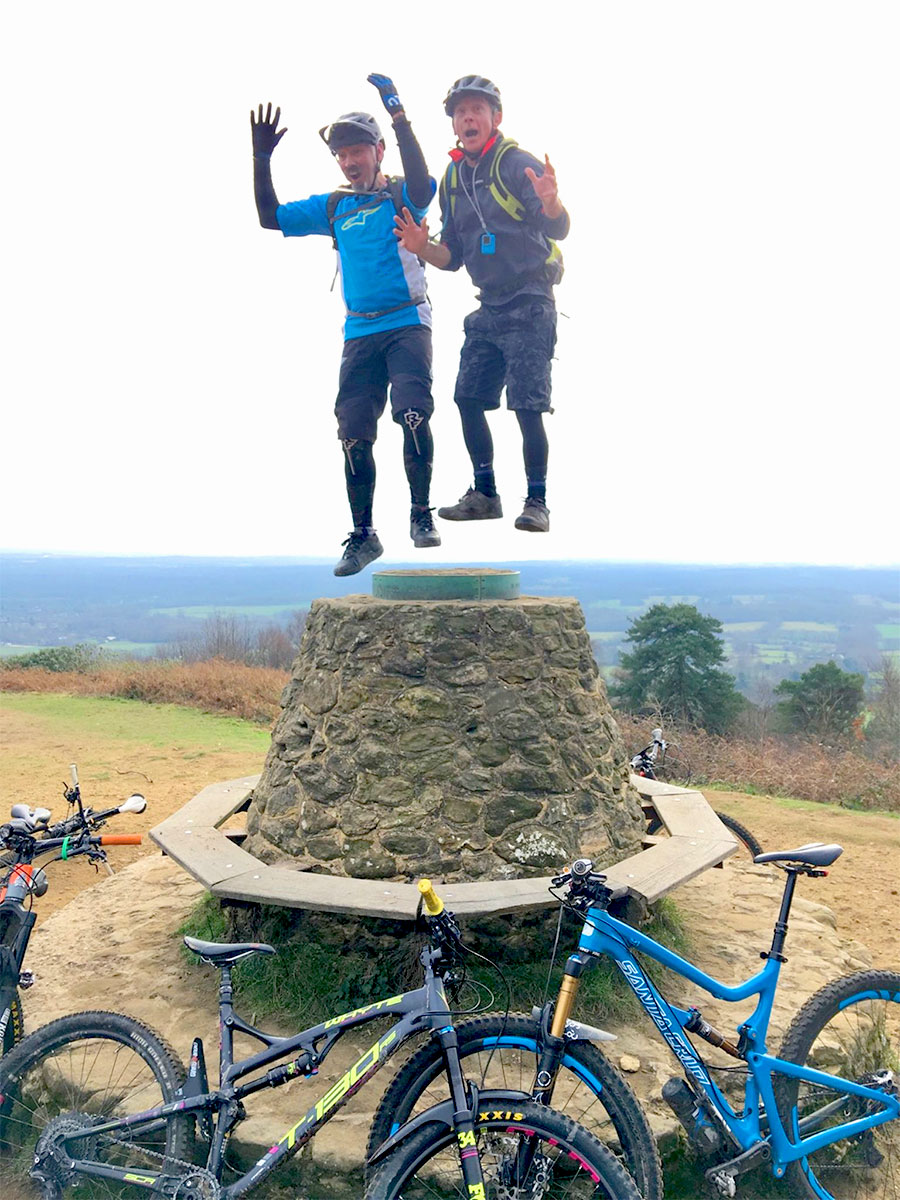 It sounds crazy doesn’t it? But this weekend was the first chance we had to go on our 2018 Christmas ride – fortunately the timing was perfect.

Last year I said the key to good riding was your riding company and the experience you had. Well, that’s still true. Our Christmas ride mustered 12 familiar faces and involved a long ride over to Holmbury, then Leith, Friday Street, Ranmore, Westhumble and Bookham with regular pub stops for refreshment.

We set out an hour later than usual, something that suited me. Sometimes it’s good to have a bit of temporal flexibility, something JR – in his own way – has been quietly trying to convince us of for years.

These days we tend to mass in the layby opposite Bocketts Farm top car park – an annoying but inevitable consequence of the short-sighted policy by Surrey to charge dog walkers and visitors for the use of their car parks while they enjoy the countryside. It just means that people park in side roads instead – I wonder how long before they start imposing parking restrictions there? 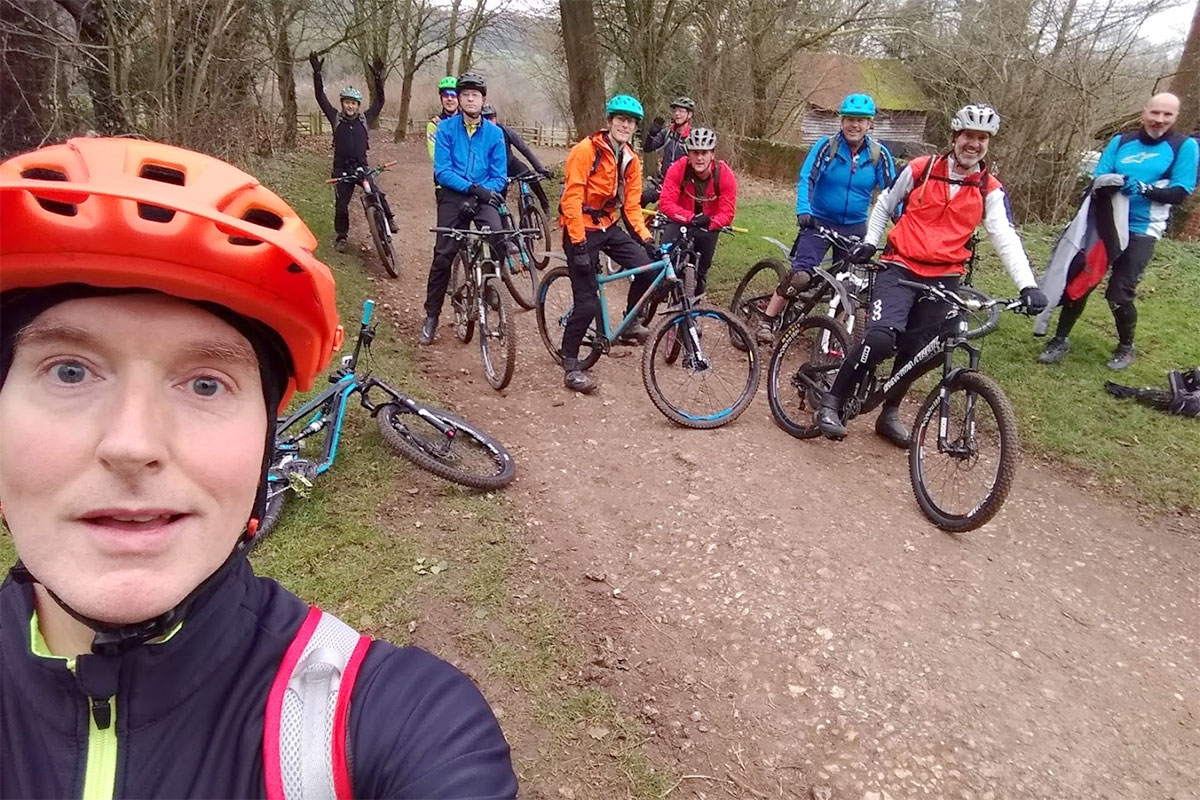 All that aside, there were 12 of us – Jem, JR, Tony, Elliot, Karl, ChrisP, James the Elder, James the Younger, AndrewK, Lloyd, MarkP and myself. That’s about the biggest we’ve had a for a while and shows what the suggestion of booze will do.

Actually, it was a terrific day for a ride. I thought I was going to spend most of the day freezing but the temperatures seemed to be just a fraction higher than anticipated, while the humidity was low. So no seeping cold to freeze the bones. No wind either and even at one point, weak sunshine to lift the spirits while we rode trails that are currently as dry as they would be in May.

We set off down Admirals, then up to Polesden and toward Ranmore via Pamploma. It took a while to realise the increased traffic up the Polesden driveway was because we were starting later than usual and not because people were suddenly rushing to get somewhere.

In the meantime, JR dashed home to collect his lights and swapped his Fat hardtail for a plastic full-susser after deciding the day was going to be a long one. We didn’t notice and such was his speed that by the time we had paused at Ranmore, JR had caught us up. 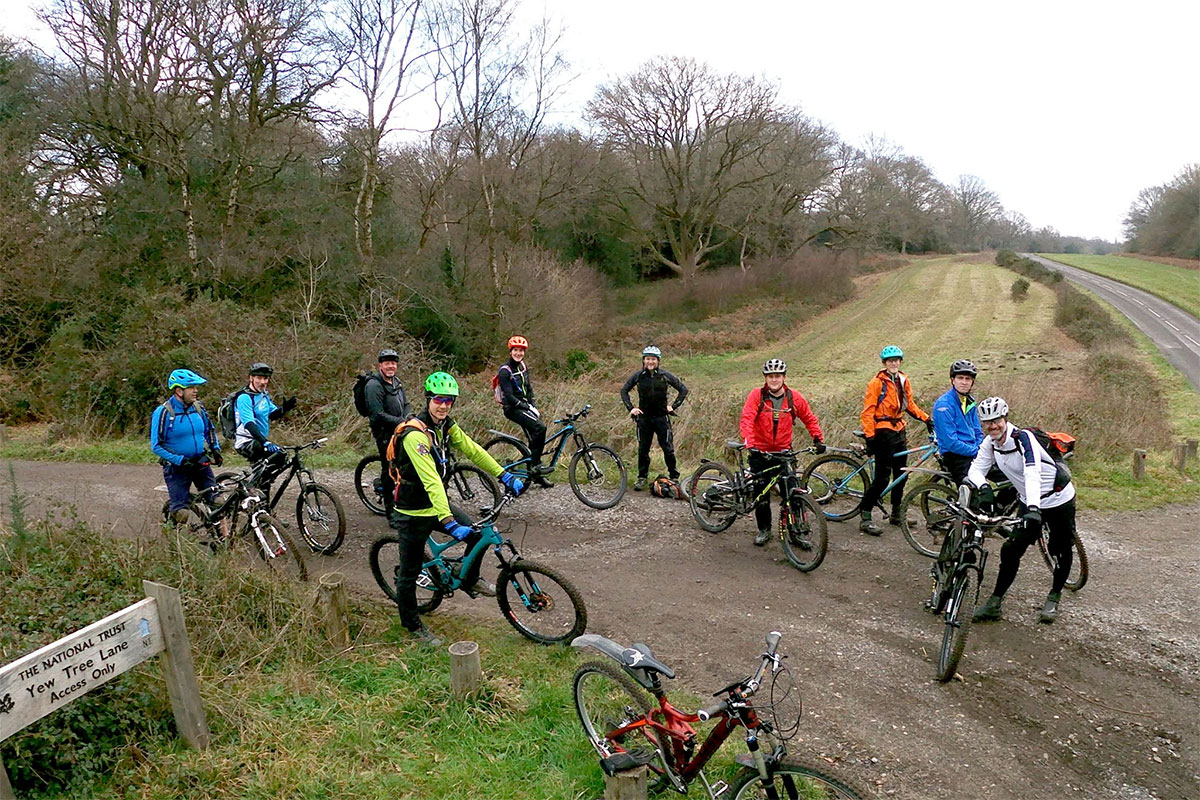 Wire in the Blood was next, then along Collarbone to White Down. Jem was hoping to show us a short trail that would bring us to the gate at White Down but we ended up piste bashing instead as the trail disappeared under loads of leaves. We retrenched and headed off down White Down, while James the Younger and MarkP set off to tackle some death plunge to the left of the Pill Box.

The rest of us found ourselves enjpying the sunshine at the bottom of White Down while we waited. There were actually lots of riders out today which made a nice change – again probably because we’d started our ride later? Once we’d regrouped we set off for Abinger Roughs and down to the A25 and the Paddington Farm climb.

At the top we paused again for breath, when a woman came past who looked a ringer for the Queen missing her corgis! Royal etiquette dictated that we didn’t ask for a selfie, so off we went again, this time up to the Youth Hostel car park on Holmbury. 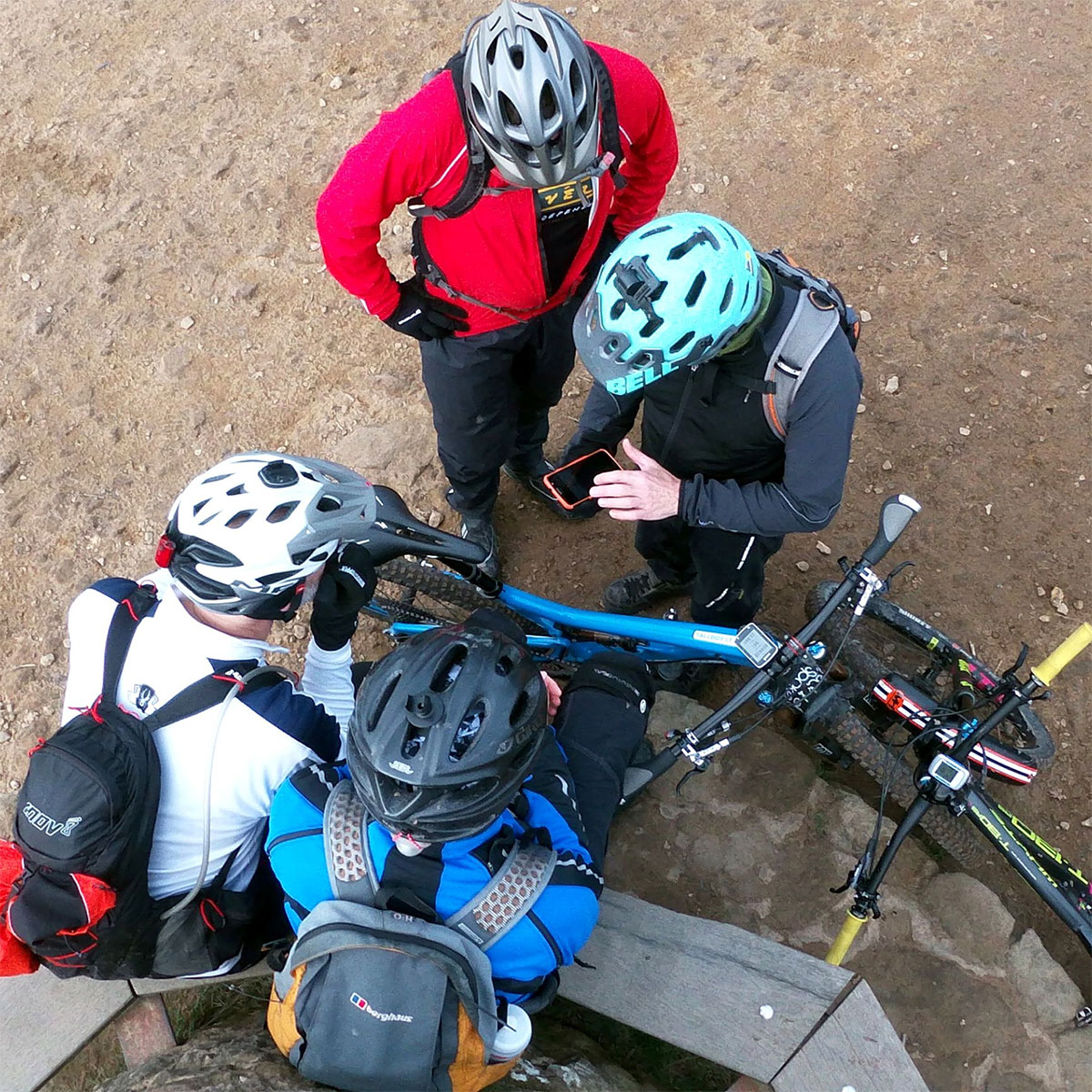 Next up was the climb up to the trig point and the sight of more mountain bikers. Having bagged some photos of levitating moles (great pics John and Karl!), it was off down Yoghurt Pots.

I was chasing Karl who was in the zone, easily keeping me at bay, but the trail was in great condition. The end result was my seventh fastest time, bettered only by my efforts in 2014. That is probably a reflection on how little riding I’ve done at Holmbury recently to be honest. 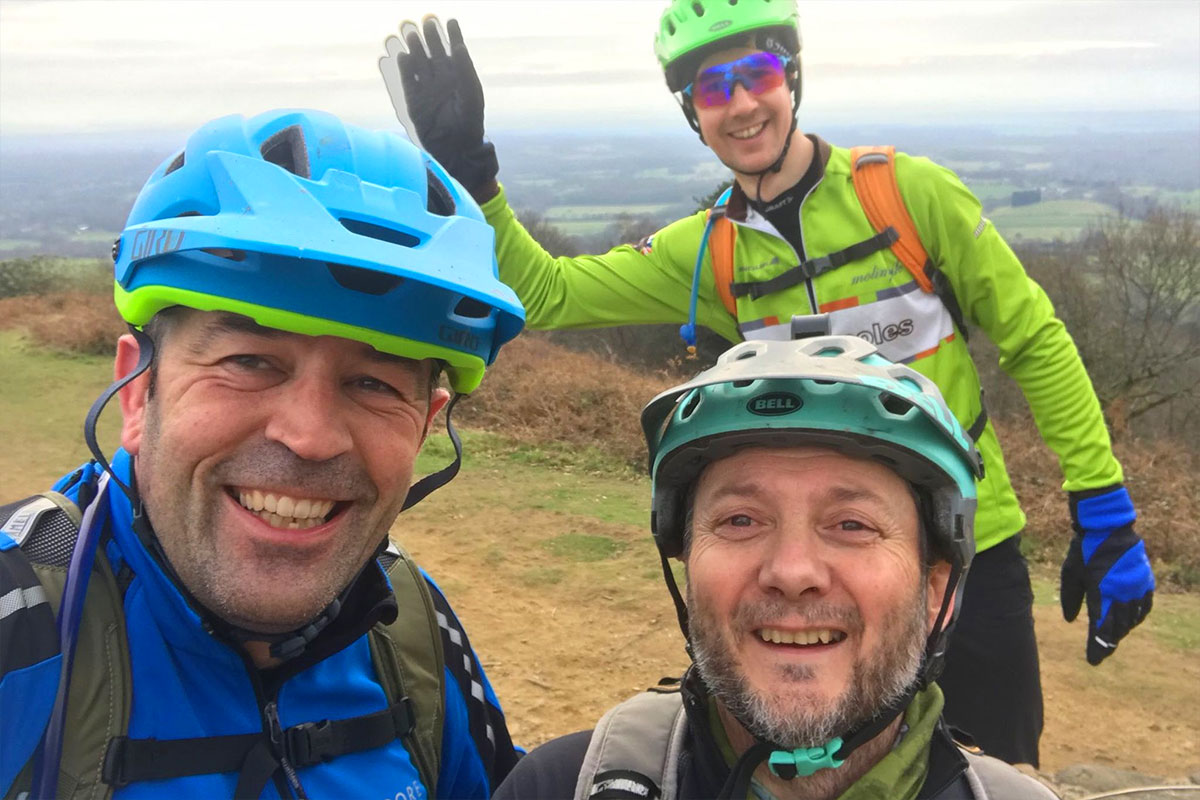 From Yoghurt Pots we did Secret Squirrel, then a bit of Telegraph Road, then Au Naturel down to the Felday Glade car park. Au Naturel is a bit of a favourite for me and it was nice to ride it without the roots being wet and making everything a grip-free white knuckle ride.

All of this is preamble to saying that next up was our first pub of the day, the Kings Head in Holmbury St. Mary! A lovely pub and a chance to relax over a lunchtime pint (sadly I am currently dry, so it was alcohol-free for me).

By the time we left, we’d lost Tony, James the Elder, James the Younger and AndrewK who all had time pressures today and needed to get home which left a core of 8 to shoulder the burden of pub number 2.

This required a drag up the Mother to High Ashes Farm which is a climb that never gets any easier although I quite enjoyed it. Then it was down Leith Hill Road to pick up Live at the Witch Trials and Bend Sinister to the Stephan Langton pub on Friday Street.

This is another excellent pub, one we are familiar with – in the past they have hosted us for a large Christmas lunch but this time we squeezed into the bar and ordered drinks and some excellent food – I went for a chicken sandwich that turned out to be an enormous fresh Coronation Chicken doorstep that went down a treat.

By the time we left, we realised we’d got lucky with timing our visit. The bar was rammed, and walkers were occupying all the tables outside even though it was rather chilly.

Our task was to drag ourselves out of Friday Street via Noons Corner. The flipside of the lovely trails in to the pub is a drag out on tarmac. I would have been quite happy to head over to Wolvens Lane but time was pressing on and pub number 3 needed visiting, so we stayed on Sheephouse Lane down to Wotton where the Hatch tempted us to no avail. 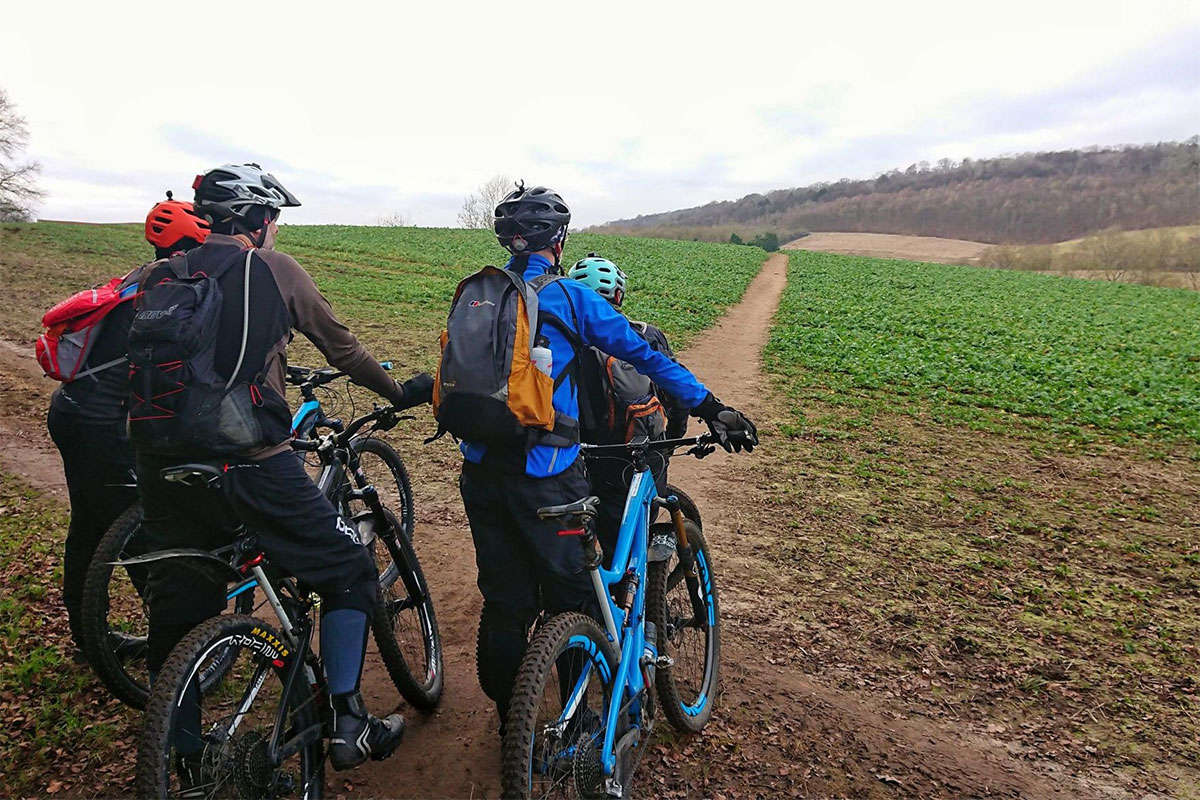 Our target was further on. We headed to the church, took a cheeky footpath down through Dearleap Woods and headed for High Med and the long climb up to Ranmore. There were still plenty of people out on the Hills walking and riding but we were starting to wilt a little as the food and drink took its’ toll. The climb up was long and grindy but we cracked it in the end.

Once we’d recovered a little, it was a fast thrash down Rumble in the Jungle to Westhumble. This trail was so much fun and probably the most enjoyable of the day for a lot of us. I did have a moment when grip deserted me (I really need new tyres!) but we were all unscathed by the time we rolled into the car park at the Stepping Stones in Westhumble.

Another busy, buzzing pub with a welcoming atmosphere. The Surrey Hills pubs all seem to get that their business is riders and walkers as much as it is families and groups and are all the better for that. The warm atmosphere and comfortable seating soon had us regretting the need to move on after another round of drinks. I could easily have relaxed for longer!

But time was drifting on. Lights were required by the time we left, with us knuckling down to dispatch another long climb, this time up to the top of Crabtree Lane and a whizz back down toward Bookham. Elliot took his leave, which meant a lucky seven finished the day – and the remains of the whip – at the Anchor Pub in Bookham. No link this time (no website), it’s a very old skool locals pub!

Thanks to Jem for herding us so competently for the day. All in, just under 30 miles, 3700ft of climbing and 4 pubs. It’s my best ride of the year so far…