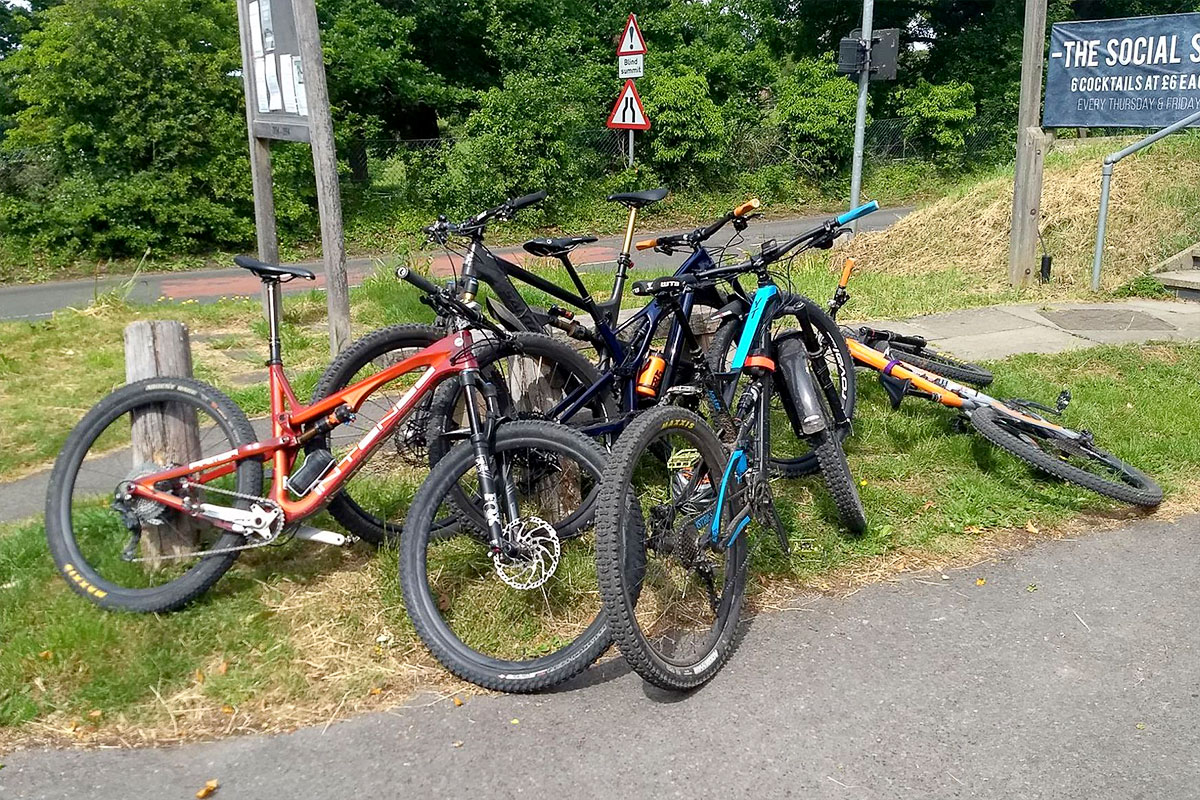 It’s always nice to be able to stump up a ride report and after a lot of commuter riding, a Sunday social was just the ticket.

On Frday I managed to rendezvous with Lloyd and Tony at the King William for a post-work drink. Sitting in the sunshine and drinking beer was very welcome and I mentioned I was finding it hard to drag myself out of bed on Sundays to ride. Which is where this weeks’ suggestion of a 9:00 start came from and that extra half hour made all the difference to me.

It also, as luck would have it, helped Kev and Jem. In particular, Jem who’d decided late Saturday that he’d break his Welsh sojourn a few hours early to join us.

When I include Lloyd and Elliot that made five of us, altough Tony was ‘unavailable’ – a situation I’ve found also myself in over recent weeks.

The plan was a Ranmore/Mickleham sort of winch and plummet ride which morphed a little into some classic XC to string a few trails together.

We started out heading up Crabtree Lane to ride View To A Kill and as is often the case when I feel I am riding it well, Strava blanked me. Typical!

From here, a slog up to Ranmore ensued, with an unexpected sidetrack of a brief chat with Colin who has been sighted more than once recently on the local hills.

After dodging a myriad of roadies coming down the Ranmore Common Road, we caught our breath before Rumble In The Jungle, which was in tip top condition. I continue to dodge the gaps but that’s no hardship and today I managed my fastest time, so the Jeffsy with the Hunt wheels and Maxxis tyres is working well.

Then it was off toward Westhumble with a short detour at Chapel Lane to pick up the tail end of Red, White and Rose. All was fine until we met a walker coming the other way whose startled dog arrowed straight for me! I’d already stopped fully some distance from the walker but for a few moments I thought I was going to get gouged until our dog-whisperer Kev intervened.

Back underway again, we crossed the A24 and climbed up to the Mickleham Gallops where I was finally introduced to Pot Noodle, a nice meandery trail that was very enjoyable. Although is there anywhere that’s not nice when the trails are this dry? 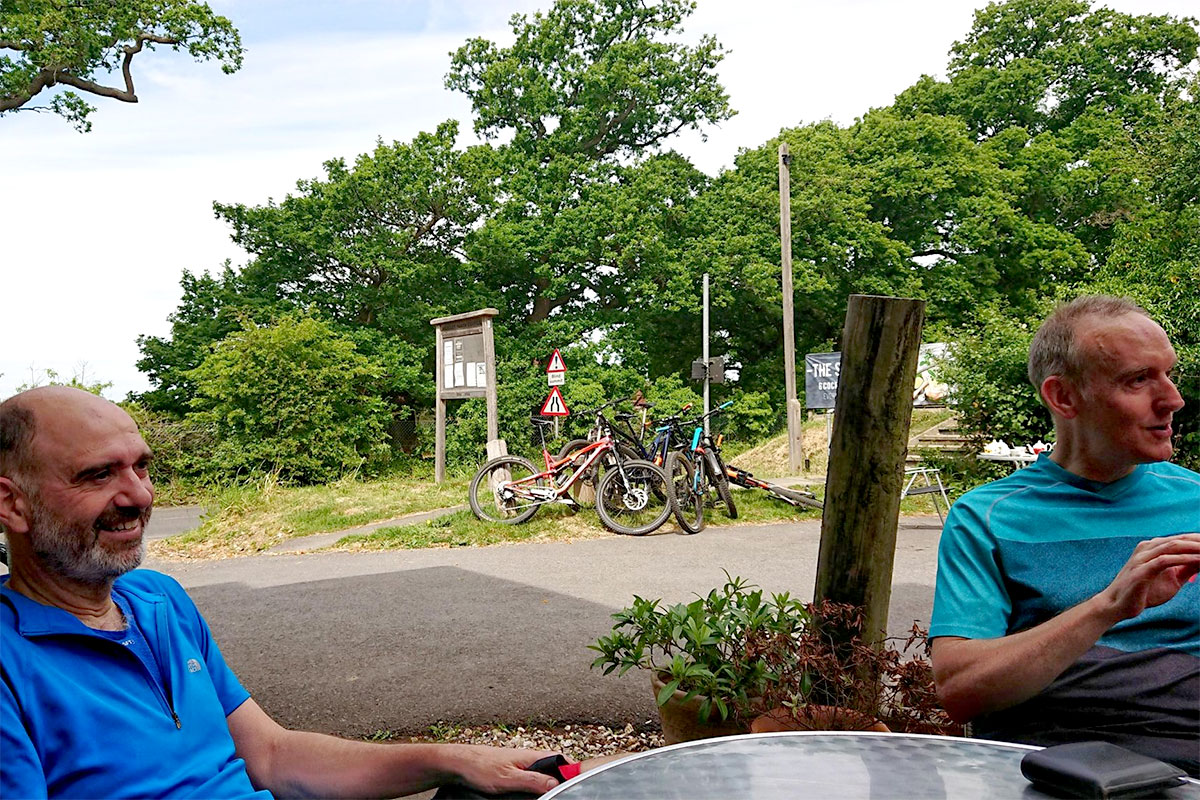 From there, it was back up and time to consider where to get a coffee. We settled on The Headley Tea Rooms at the Village Stores near the Cock Inn which was packed with more roadies. I couldn’t fault theie taste, in fact I would say the cake I ordered (Apple, Cinnamon and Sultana) was one of the best I’ve had for a very long time. 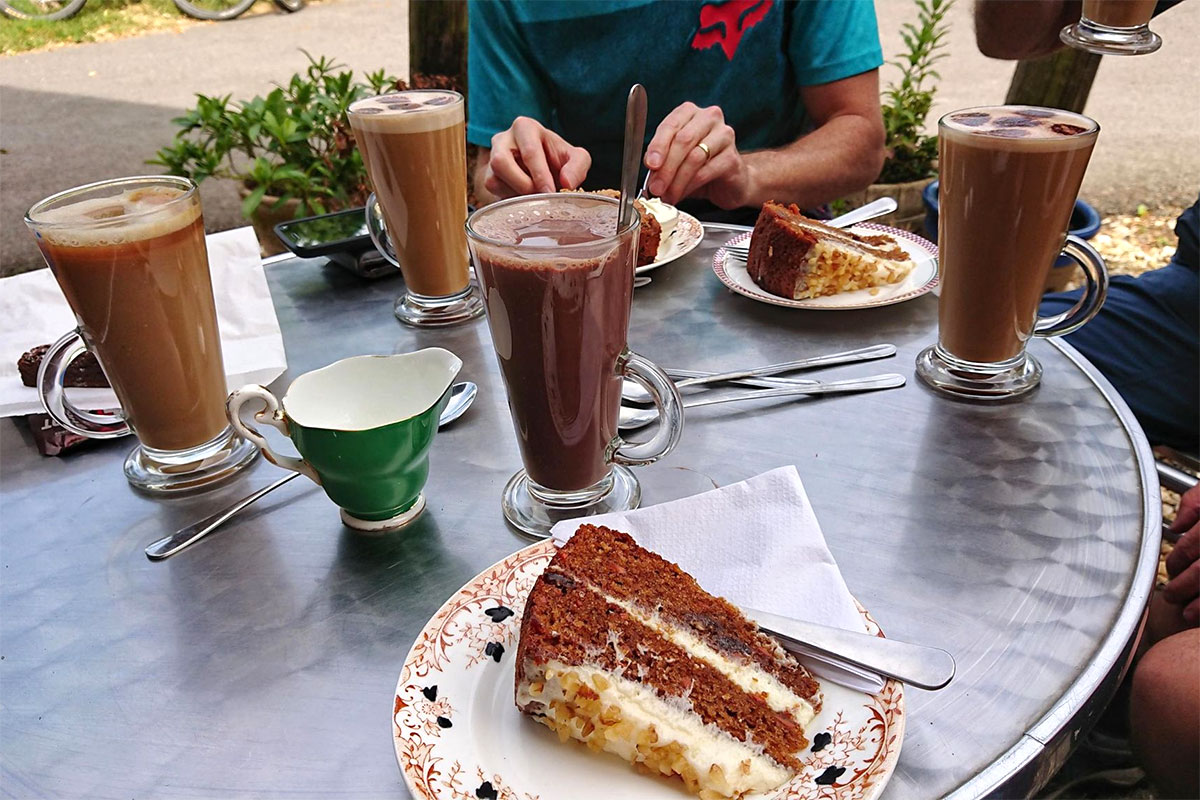 Suitably fortified, we wandered up to Headley and had some fun on Secret Singletrack (which is just about OK from a foliage perspective at the moment) and then blasted across Gear Selecta!

Anyone who rode with us years ago will recognise these trails but they have been sufficiently off our radar that they feel novel. We only pressed them into use to get over to the top of China Pig by the Box Hill Road but for a while the ride was feeling rather XC and none the worse for that.

Once at China Pig, which I’ve ridden a couple of time recently and is in good shape, the preference was to try Pseudo Pig instead to ring the changes. In a way it’s better than China Pig although the flow is quite different – more twists and turns and fewer fast sections. It was great fun today, and a good choice.

Next, it was back up on to Mickleham Gallops, this time to ride Shaun’s Helmet (a phrase you don’t hear everyday). It’s new to me and I found it was all do-able but very off-camber for me. It’s quite steep and will suit some people better than others but we all rode it well today despite it being quite dusty and drifty.

By now it was hot and with the humidity we were starting to wilt (with the exception of the indefatiguable Elliot). We dragged ourselves up past Norbury House and finsihed the ride at Bockett’s Farm with a healthy 23 miles on the clock and over 2,600ft of climbing.

I need to make the effort more often because I really enjoyed the ride and everyone’s company today – thanks to everyone for making it such a nice ride!