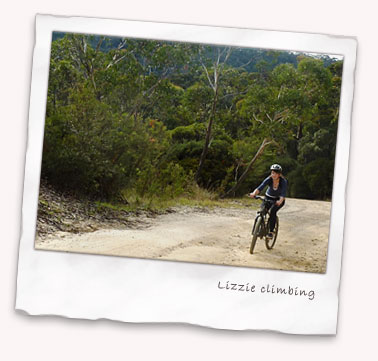 Apparently it is a little known fact that you don’t get Moles in Ireland or Australia. Despite that Lizzie, my 18 year old daughter, and I thought some off road riding in the Blue Mountains sounded a good weekend activity. And a good opportunity to extend the range of Muddy Moles ride reports.

So on a Sunday morning we found ourselves at Blaxland cycles in Katoomba, some 100km west of Sydney. Twenty minutes later the chatty proprietor had provided a couple of hire bikes; hardtails with cable disc brakes – Felt Q520 I think, which is a brand I had never heard of.

It’s well known that as Australia is on the other side of the globe everything is upside down, and the Blue Mountains are no exception. All the roads and towns are on top, so visitors go down the mountains for a hike and climb up the mountains at the end of the day. As a result, Katoomba is 3000ft up and pretty chilly on a clear autumn morning, so our hands were blocks of ice by the time we had ridden out of town on the cliff drive.

We soon reached Narrow Neck, a long finger of high ground sticking out about 8 miles between the Jamison and Megalong valleys, with sheer drops on each side. We turned onto Glenraphael Drive, which leads right to the end of Narrow Neck. With a name like that you may expect a pleasant tarmac road but what you get is a rutted dirt and sandstone 4WD track pretty much like Wolvens. 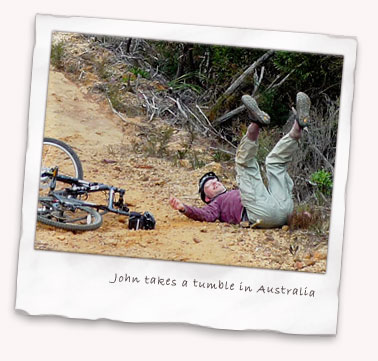 As the track undulated along the top of Narrow Neck a series of short steep climbs alternated with sharp descents and the relief of a few gentle flat sections. It was on a slightly more sketchy descent with a surface of sand and broken stone, that I felt the front wheel inexplicably sliding to the left, then the right, and then found myself briefly riding upside down as I parted company with the bike. Luckily Lizzie had her camera at the ready.

I got back on the bike feeling puzzled because although the grip on the slope was poor, I had successfully survived more difficult descents slowly trailing the Moles around the bombholes of Ranmore and Leith Hill. Then as I gripped the brake leavers I realised the they were reversed from normal, so instead of maximising the braking on the back I had been locking up the front – a sure fire way to part company from the bike.

Feeling better now that I knew why I had fallen, we continued to the end of the ridge in about and hour and a half. Stopping for a sandwich and to admire the view, we were joined by an Australian couple on a pair of full suss Stumpjumpers – the first bikers we had seen in the area. 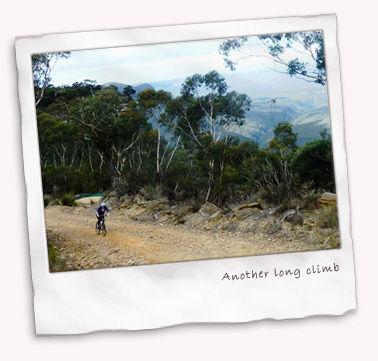 It often feels as if the journey back goes a lot quicker and this was no exception, with the endless sequence of climbs and descents on the trip out turning into a series of just five hills before we got back to the main roads and the town of Katoomba.

All in all we covered about 20 miles in about 4 hours including the lunch stop, and I had learned a valuable lesson about checking over hire bikes before I riding. If anybody is looking for an off road ride near Sydney I can recommend the Blue Mountains, and would also suggest the area south of Glenbrook, which is less than an hour’s drive west from the city.

Filed under Rides in June 2010