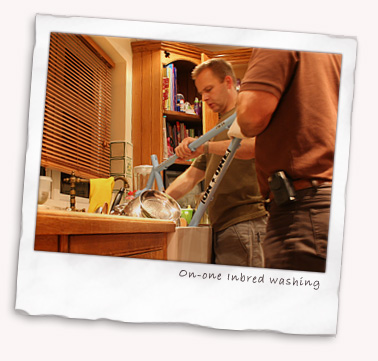 Whilst many of our ilk are popping out children at an alarming rate (just have a look at DoMTB if you’re unaware), I’ve decided 3 kids is more than plenty and my broodishness of late has been for a bike. So, with the assistance of Matt and Dave, Friday night saw us ‘delivering’ my new Inbred singlespeed in my kitchen, with my wife’s blessing.

It was more a case of transferring parts from one frame (20”) to another (18”) as the new pre-built bike I got for a mere £470 was too big. Instead of gas and air or epidurals for the delivery, we had to rely on Grolsch to get us through the tough bits, like removing the bottom bracket. 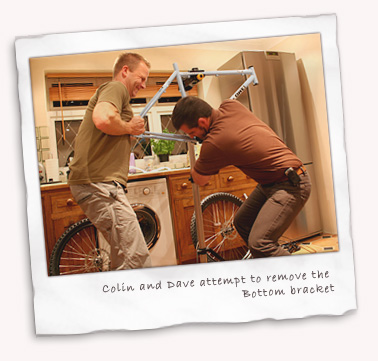 Quite why a BB needs to be installed so tight is beyond me and despite various attempts such as immersion in boiling water (see the sink action shot) and hanging off the thing like monkeys in a tree, it wouldn’t budge. But the Dunkerque spirit set in and we finally conquered after knackering the only tool I offered up for the party, which turned out to be made from cheese!

Thanks to the array of special tooling supplied by the boyz, the rest was fairly straight forward. Remember learning all about the industrial revolution and the specialisation of labour at school? It came flooding back to me when it became clear that Dave was doing all the work, I was getting in the way and Matt was drinking beer. 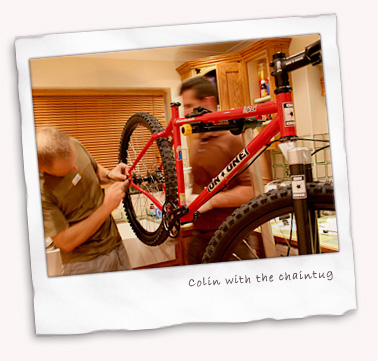 I had done quite well on the beer front too and this became obvious when I tried to fix the chain back together – using a small tool to push an even smaller chain rivet back from whence it came after a couple of drinks is quite tricky and I could sense Dave’s agitation on witnessing my pathetic attempts. After what seemed like 10 minutes later (to him – I was quite happy faffing), he took over and we were soon riding up and down the road to check what we had left off, or loose.

I then had to wait until Sunday for the first ride proper and a trip to Newlands saw me, Dave (29er) and Jez (TInbred single speed kept very quiet up to now) on a ‘Gears R Gay’ ride whilst Lee joined us, metaphorically wearing the pink lycra and tassles (I hate in-jokes don’t you?). 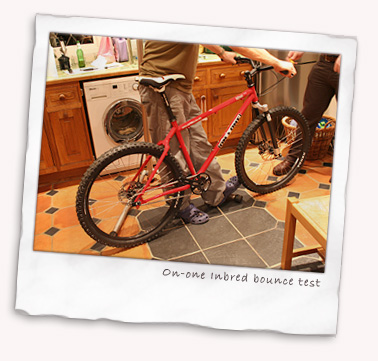 The euphoria experienced when I rode Dave’s 29er came flooding back and it was great fun. Particularly with the rigid forks, like riding a BMX on steroids. The light front end threatens to slap you in the face when you lift it up to bunny hop or manual over something and the low bottom bracket means it does the most fantastic broadside skids.

It is just such a massive hoot to ride. So simple, so alive and so responsive. Stomp the pedals and it takes off, flick the bars and it turns so fast and it encourages you to think so much more and plan the route ahead. You can’t be lazy and just rely on your 6 inches of travel or whatever to ride ‘as the crow flies’ through anything in your path, you’ve gotta be cute, clever and cunning to keep up.

Then there’s the pedalling. I admit to all experienced singlespeedsters 32:18 is a bit lame but have you seen my legs? Commenting at one stage that I would probably drop to 17 on the back soon, Dave very wisely suggested I should wait until trying Box Hill. How right he was-the climb from Bagden to Wiggly Wood was an absolute killer and I was walking by half way up. However, I won’t be soon.

Y’see, that’s what its all about. A few months of riding this thing regularly and I won’t be walking up there, I aim to be riding up it at speeds I can’t imagine now. Toughing it out with one gear is going to improve my fitness, skill and strength without doubt.

Whilst I promised not to tell anyone that Lee rode a bike adorned with Mary bars, Lee took comfort from the fact the bridleways were secluded and nobody would see him, so he had a couple of miles on it back from Newlands. He experienced the same ‘born again’ moment as I did.

Watch this space folks, I think Lee could be next in line. He also whispered the Mary bars were extremely comfortable…

Filed under Bikes in September 2008