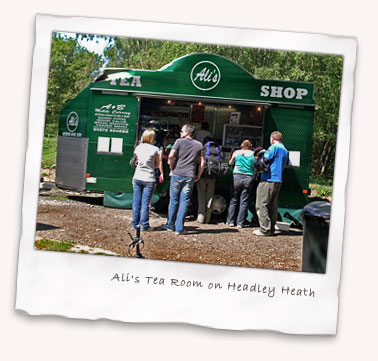 Homer and I have cake in common. This was our first taste of Ali’s Tea Room and so I felt it time to dust off the cake review category and type some words.

There we were at the end of May, prime time for all the little kiosks and cafes to make a bit of money in the warm weather. So, when we arrived at the kiosk at the top of Reigate Hill to find it closed I was rather confused! Why on earth would you shut the kiosk for redecorating (3 weeks according to some runners that were there) in peak season? [Update – it’s now re-opened – Matt]

Anyway, at least it was downhill on the way back so we decided that Headley Heath was the next port of call for refreshments. We took on what energy we had with us and headed off.

Now I’ve been around here all of my life and I recall the old tea hut in the Headley car park and never really felt the need to buy anything from it. On reaching the new mobile tea room though we found a number of roadies already there who offered the advice of “pasty and brown sauce” as the ideal choice. Certainly the choice was excellent including all manner of cakes and hot food including the aforementioned pasty, sausage rolls etc. etc…

I opted for a jumbo sausage roll and very nice it was too. Many cakes were sampled and judging by the empty plates I’d say it was all good stuff.

So if you do find yourself in that neck of the woods and fancy some refreshment I don’t think you can go wrong, and they don’t call me Dave the Cake for nothing!