I don’t know what it is. Some people go to great lengths to avoid using Camelbaks or any other kind of hydration system on their back, citing spurious excuses like:

I’ve heard all of these, none of which class as a rational excuse in my book.

Pinch Flat News has also noted this odd antipathy toward one of the most practical solutions in the world of cycling in his article ‘Great conundrums of cycling: Why don’t roadies wear Camelbaks?’.

It’s obviously a bit of roadie baiting but entertaining and possibly accurate all the same. However, some people have to go one stage further. The Singletracks blog reports that Sip Stream have ‘invented’ (if that’s the right word) a half camelbak, half waterbottle device that fixes on your water bottle and feeds fluid to your eager mouth, all without ever taking your hands off the bars! Who’d have thought eh?! 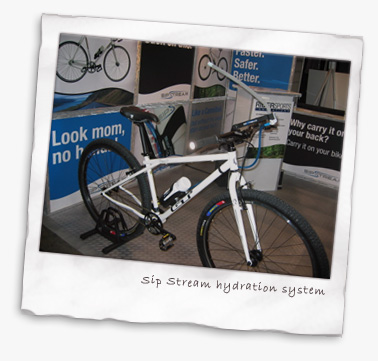 And best of all, it doesn’t look stoopid!

In a parallel universe where Camelbaks aren’t invented, this might just catch on.