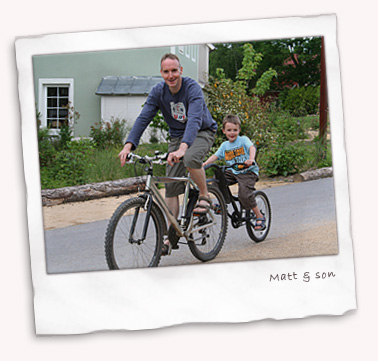 We’ve just returned from our first Center Parcs experience, at the Lac d’Ailette in France. Anyone who’s ever wondered at what they’re going to do to entertain their kids for a weeks’ holiday has probably been sucked into the Center Parcs vortex, which mixes Ikea-on-steroids housing with plenty of kid friendly activities, and a supply of adult only booze.

Surprisingly, the whole thing was pretty good. Not in a cultural sense, although being in France at least the boys got a sense of travel and foreign language. Worrying, it’s amazing how quickly a five year old can pick up French words, nearly exhausting my vocabulary which took me several years to acquire.

But, as you can see from the picture, the best part was that bikes were involved! We took our tag-along with us and hitched it to the mountain bike I hired during the heaviest rainstorm I’ve been in for some time. Having got ourselves properly wet we set about enjoying the Parc (sic) together and spent the rest of the week hooning up and down hills every time we needed to get anywhere.

The bike was a bit short in the top tube and had only a semblance of effective gearage but we managed to zoom down the hills and my boy proved a pretty useful stoker on the climbs (it’s not often you can say that!).

Great fun, even if his aunt and my wife both wondered obliquely at the speed we were going at! Our youngest enjoyed the free ride on the child seat on my wife’s hire bike too.