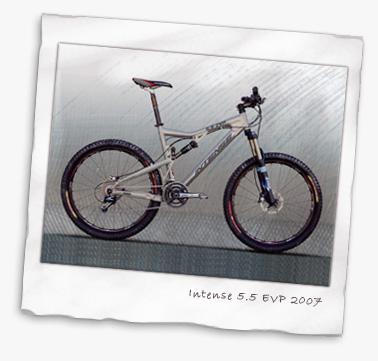 As I’ve mentioned previously, I’m looking for a new bike and took the opportunity of the Cycleworks Demo Day to try out a few contenders.

Unfortunately for me, the ride I had round the Holmbury Hill trails on the Intense 5.5 EVP was compromised by an oversized frame and an odd choice of components. The bike was supplied by the Intense importers who had obviously done a deal to show off some of the fork and brake options available through Magura.

Now I have nothing against Magura, in fact I was impressed by the Menja forks and the 2007 Louise brakes that were on the frame. But to be honest, I felt that anyone buying an Intense frame would be looking to fit components that had a bit more of the bling factor associated with them.

So, this weekend I’m taking out Cycleworks‘ own Intense 5.5 EVP demo bike to try on my every day trails. I already know how it feels around the Holmbury singletrack despite what I’ve mentioned above. But what I’m really interested in is how it feels trying to cover the flinty, stony energy sapping trails around Ranmore and Box Hill which forms my bread and butter, default riding environment. I don’t just want a bike that comes alive on the singletrack, for this money I want something that can handle my all mountain needs as well.

This Intense 5.5 promises to be more in line with how I would want to build up the frame. It has Rock Shox Pikes (and therefore a bolt through front axle) and a full XT groupset including XT disc brakes, not forgeting this bike should actually fit!

So I’m looking forward to this weekend immensely. I’ll report back with a full review next week on how I get on.