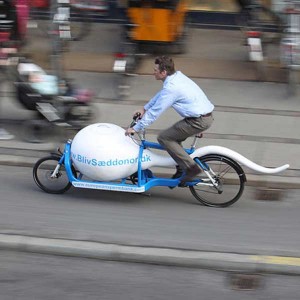 I’m trying desperately to avoid the sniggers but it seems that some fertility clinics – of which the Seattle Sperm Bank is just the latest of, er, several – are now delivery sperm using specially adapted cargo bikes which carry their precious cargo at temperatures as low as -150°C in special nitrogen cooled tanks.

Ironically, the cargo bike’s name is BULLITT (built by a Danish manufacturer – Larry vs. Harry) which gives a whole new meaning to the notion of firing blanks!

Read more on Bikemagic where I shamelessly nicked this pic from!