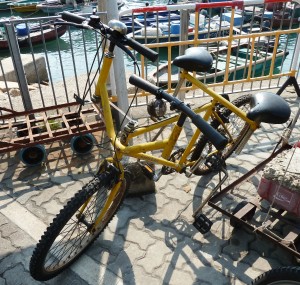 I never though tandems were relevant to mountain biking, until Darren and Amanda joined us with their Elsworth full suss. Following them down China Pig was a revelation – such a long bike twisting  through the tight turns and the back wheel flipping into the air as it bucks downhill.

It was with some trepidation that I had a go on the back seat on the much more benign route around Norbury House. It was great fun, but of course the limitation is that from the back you have no real idea of what is coming up – all you can do is pedal and lean as required, and hope that Darren knows what he is doing.

So I was amazed to spot this vintage creation, apparently from “Buddy Bikes” of the USA.

A side by side tandem sounds a lot of fun off road, although perhaps too wide in practical terms.  And I am not sure I would like to be sitting next to Dave W or Andy C going down Death Star, even if there was room for the bike.  It also presents its technical challenges with balance, but the big question is who sits on the right and steers/breaks and who sits on the left and holds on for dear life .

Apparently Buddy Bikes no longer make this style, now focussing on tandems with the “stoker” at the front and steering from the back, so children and disabled adults can sit at the front and see what is going on – perhaps the reason this side by side version was developed at all.