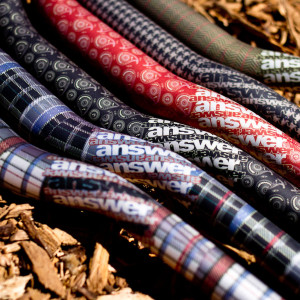 Sometimes we’d all like to be just a bit different to everyone else. Sometimes we don’t. To cater for those occasions when you want to make a statement while keeping your mouth shut, Answer have released these limited edition ProTaper handlebars, dubbed the Gentleman’s Collection.

I’m really struggling to work out what it is they think we’d want to say about ourselves that would make us want to buy these, while at the same time thinking how cool they look. In particular I’m drawn to the plaid which is called Flannel in Answer-speak. I can’t quite imagine what these would look like actually fixed to a bike, or what colour scheme would work best; what grips would you use? Do you go for black forks or white? And so on.

One things for sure, it’s a real opportunity to get people talking about you! Perhaps it’s something for the Gentleman racers amongst us?

Based around their ProTaper Downhill handlebar, these are wide, 780mm bars that come in at around 335g in weight and are fashioned from 7050 series aluminium. That means they are by no means light, but not bad for such a wide bar either. The bars sport an 8° backsweep with an upsweep of 4° and are part of an initiative which Answer claim will see new designs launched every few months, while keeping availability tight. If you want one, you probably need to buy one soon.

The finish itself is apparently extremely durable, using a ‘military grade’ hard anodisation process, whatever that is. Enough to prevent it wearing away too easily I guess although bars don’t tend to get too many scratches anyhow.