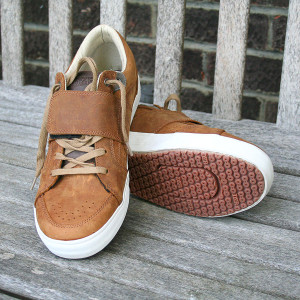 I’ve been meaning to post this for a while but found myself delayed by a shambles of confusion between me, some SPD pedals I did want, some chamois cream that I didn’t want and Wiggle. So instead of a full review at this stage, here’s some information about some SPD compatible trainers from DZR shoes that I’ve recently acquired.

As many of you know, I bought myself a Trek District 1 singlespeed for a bit of urban riding. It’s intended for short journeys and coffee shop trips with the occasional trip to the pub thrown in, and so far is proving ideal for the task. The only problem is finding the right kit to wear.

I could easily don some lycra, as riding to the nearest town for coffee is still a three mile trip and you get quite warm on a singlespeed in summer. The lycra doesn’t sit well with any small children I might see when I’m in town (or old grannys for that matter), and it certainly doesn’t sit well with the retro aesthetic of the Trek itself. So I need some technical ‘urban’ gear in order to turn heads for the right reasons.

I thought I’d start with my feet and DZR shoes have come through for me with some great looking SPD compatible trainers (or sneakers I guess in US parlance). They were kind enough to arrange for me to receive some Dice shoes in Tan from their wide range of men’s and women’s shoes, so here’s my initial findings (BTW, despite how that last sentence reads, I should point out that I was only interested in the mens shoes, not the women’s of course!). 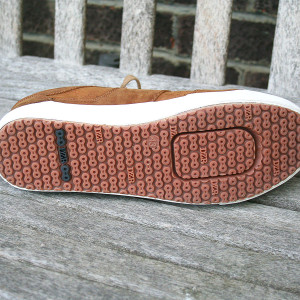 First off, the Dice shoes looks close to a regular trainer/sneaker except there’s a number of bike specific details. These include a nylon mid sole which stiffens up the shoes for pedalling duties, a wide leather strap for keeping the relatively short laces under control and out of the way of chainrings and most importantly, a section of the sole which can be cut away to fit cleats. A chainlink shaped logo on the rear of the shoe is also reflective for extra safety at night. All together, this makes the Dice a smart, rather discreet shoe that is capable of riding bikes with either platform or clipless pedals as the need arises.

I now have suitable SPD pedals for the Trek and have been riding these shoes both clipless and unclipped for rides between 30-45 minutes. I will be reviewing them in more detail soon, but suffice to say at this stage I’m rather pleased with them, with most people not even realising they are bike shoes.

DZR Shoes are based in San Francisco and are imported into the UK by Fisher Outdoor, which means they should be easily available to your local bike shop.

My thanks to Brian D at DZR for making the Dice shoes available.