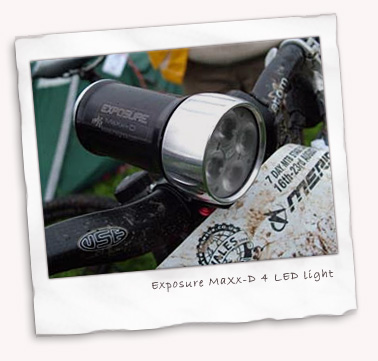 In practical terms it’s now common to find yourself riding in shadow even when using a HID such is the output of LEDs from following riders. But, with a new winter season approaching, so new models are released.

Exposure Lights are staying quiet themselves but Bikemagic reports the sighting of a 4 LED Exposure MaXx-D (for Daddy) at the recent Merida TransWales, looking for all the world like one of those 1,000,000 candlepower torches from Halfords strapped to the bars. I’m sure in the flesh it’s much more discreet but it certainly promises to give Hope’s 4 LED Vision light a run for it’s money since it looks as though it uses the same lens arrangement.

Guess it comes down to whether you like the CNC’d look and separate battery of the Hope Vision or the more integrated approach of the Exposure. Either way you’ll be toting a pretty hefty lux punch, for this year at least…