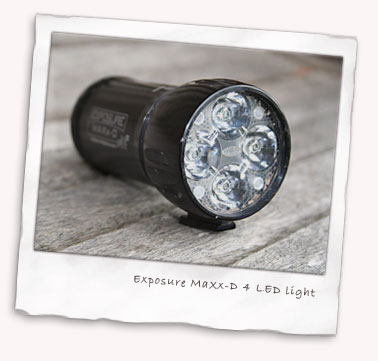 Back in August we first learned of the development of the MaXx-D 4 LED light. At the time I had little expectation that it would have anything to do with me and in fact September saw me musing on whether to keep my Hope HID or upgrade to the Hope Vision 4 LED instead.

Never one to let a public statement of intent stand in the way of my decision making process I found by early November that I was the owner of an Exposure Lights MaXx-D light instead. I won’t go over the economic whys and wherefores as I’ve covered that in an earlier post but suffice to say that cost wise the move to the Exposure has been similar to what I would have paid for switching to the Hope. Which is not to say it was cheap.

What I have gained is all the attributes that have appealed to so many other mountain bikers out there that have been impatiently waiting for the MaXx-D. The light is one of the lightest on the market at 320g which is a nice corollary to designing the light as a cable free unit. That means all the LEDS, power cells and switches are contained in the single unit, keeping not only the weight down but the convenience factor high. It’s so nice to be able to just clip the light to the quick release bracket and set off without faffing with wires and connections. 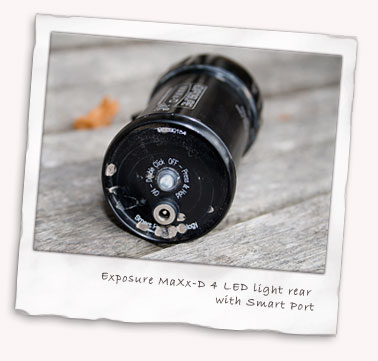 The quick release bracket itself is great, providing a solid platform for the light with no jiggle or reason to believe the light is going to be anywhere other than where you placed it. I’ve added a spare one to my other bike so I can easily move between bikes as the fancy takes me (or, more accurately, as their state of repair dictates). The only downside here is cost which at £20 is on the steep side.

With top end kit of this quality though I was a bit disappointed with the initial out of the box experience, maybe because I had high expectations. At £325 RRP, perhaps that wasn’t unreasonable.

The light comes with what Exposure call clam shell packaging with the quick release bracket, smart charger and light set into foam cutouts. So far, so very Bond but I was disappointed in the box itself which feels like it’s made essentially out of the same material M&S sell their chicken risotto ready meals in, with a bit of thin fabric over the top. It works in protecting the light between factory and customer but probably won’t stand up to extended use keeping your light safe in the back of the car.

I know many are unlikely to use the case as such, but this is a race oriented light as well as a trail one and those competition guys do a fair bit of travelling to races. I was hoping for something more in the photographic equipment case league. It’s not bad as such, just not great and if there’s anything Apple have taught us when it comes to making you feel glad you shelled out the clams it’s the initial experience you have with them as a brand. Maybe I’m shallow.

The temptation when you first get the light in your hands is to turn it on and frag either your own retinas or those of your spouse in an attempt to show them what 960 whatever–they–are lumens feels like. Don’t do this because you won’t be thanked. When you’ve climbed back off the floor, weeping at the pain inflicted (either directly or via an irate spouse) by those 960 lumens you’ll think to yourself ‘that wasn’t that bright, maybe I’ve just wasted £325?’ Well, of course you have if you plan to use it in daylight!

Be patient and charge the light for the recommended 24 hours. Then go out for a night ride. 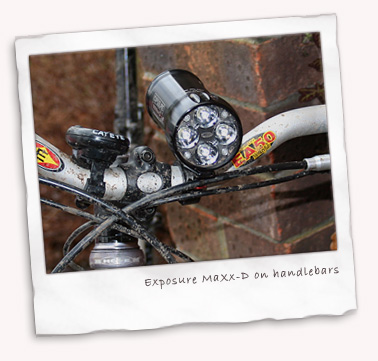 Out on the trails you’ll find that this light is a revelation, providing ample light with no discernible hot spots to the beam at all. It has enough power to flood the area with a broad wash of light which gives great detail in the foreground yet still has enough distance (or throw) to let you ride at speed with no real worries. Personally I’ve found it compliments the Trustfire TR-801 Cree Q5 LED torch that I’ve been using on my helmet perfectly as the torch has a much tighter beam which gives the directional light on tight singletrack.

The convenience mentioned earlier really becomes apparant the more you use the light. Not only the simple cable free design which makes it so easy to pick up and snap on your bike as you leave the house but there’s a decent burn time on full power of 3 hours, plenty for an evening. This extends stupidly long if you throttle the power back while still giving plenty of light.

The switch itself is a joy, as its illuminated and shows your remaining ‘fuel’ by changing colour as the light discharges. Toggling between settings is also straightforward and there’s even a high impact ‘pulse’ setting for riding on the road which last for days, actually lights up the road and lets other people know you’re there. Very reassuring.

Charging requirements are very simple (just plug it in after a ride and leave it) but I didn’t expect it to need 12 hours for a full charge. Having said that, it really is that simple to plug in and walk away as the charging system switches to a trickle top up setting automatically when the light is full so there’s no chance of damage to power cells.

Overall the MaXx-D scores highly for fit and finish (it’s a solid, anodised, CNC–turned aluminium cylinder essentially) and convenience as it offers the most versatile and idiot–proof lighting system I can think of. It’s got a great beam and could be used on its own under most riding conditions thanks to it’s high output. But, you can buy a lot with those 325 clams. 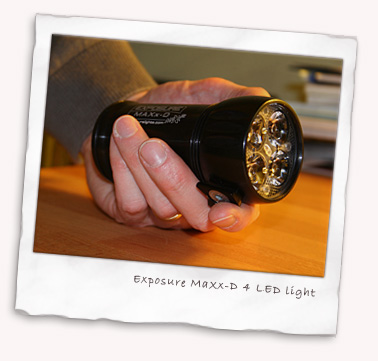 Be aware also that LED technology is moving forward faster than a frisky pony and already there’s newer LED systems out there which offer similarly high or potentially higher outputs. For example, there’s the twin pack iBlaast!, the new Lumicycle LEDSystem 3 units and Tiger Lights. Even Dave’s homebrew stuff is brighter. All these systems are not only heavier but have faffage issues for me. The last thing I ever want to do on a night ride is be fiddling with wires or brackets or batteries.

One final point though which I think is important for those obsessed with metrics (which is most of us) is that the light interferes with the signal from wireless speedos (I haven’t tried a wired set up). Both my Specialized and Cateye wireless speedos don’t work which I think is extremely irritating and worth bearing in mind. A point against the trouble free experience which Exposure are supposed to be selling.

Assuming no reliability gremlins though, quite honestly the Exposure MaXx-D on the bars and the Trustfire torch on the helmet is a brilliant combination and one I’d highly recommend.

There’s some detailed photos of my Exposure MaXx-D 4 LED light on Flickr.

Filed under Lights, Reviews in December 2008