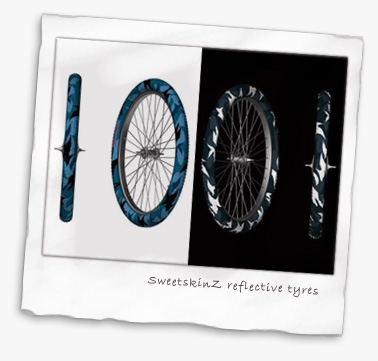 Over on BikeRadar they have a short piece about the SweetskinZ bike tyres. If you can get past the stupid company name these actually look pretty interesting, especially for commuting. By day, an ‘extrovert’ coloured tyre, by night a traffic hypnotising kaleidoscope.

I seem to recall seeing something like this in the past and indeed according to SweetskinZ they’ve been around since 1999. Claiming to offer not just memorable tyre patterns and enhanced night safety but ‘the highest quality rubber’ for the ‘adventurous mountain biker’, these could be the next big thing on the trails.

Then again, you may just get laughed out court. I quite like the snakeskin version myself, I wonder if they make them in tubeless?