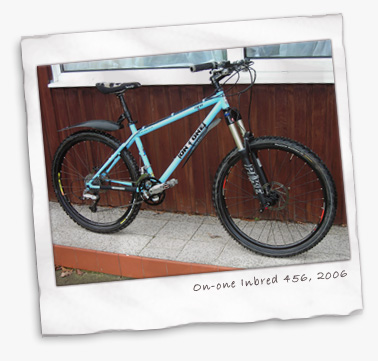 It’s all in the travel as far as I’m concerned. My beloved white Inbred is dead, long live the Inbred!

Yep, 4” used to be enough for anyone but now I’ve got a sweet 140mm of smooth Pike action up on front and my Inbred has changed from white to “that blue”. A new Inbred 456 was delivered to me in early December and I built it up over Christmas getting a few rides in over the holiday period. Then a cold struck and I was wasted for about 3 weeks followed by a holiday so I didn’t get out on it much ;o(

Still the two or three rides that I did before my illness proved to me that the old Inbred was great, but the 456 is better. I really only have one way of describing it and that is that it makes me ride like a hooligan. Matt is waiting for a big off, trouble is the speed at which I’m travelling (granted this is all relative compared to nutters on full downhill rigs), if I do have a big off something is going to get broken and I’d really rather it wasn’t bone!

Anyway, everything swapped across easily enough but I did lay out for new Rockshox Pike forks as well as a new Hope front wheel to cope with the 20mm axle. The white Inbred used to flex a lot which wasn’t necessarily a bad thing but the 456 is a much stiffer frame which is what allows me to be happier going faster. The Pikes are as plush as you want (coil version) and I’d recommend them to anyone.

Filed under Bikes in February 2007