Hunger pangs and sugar dips are the inevitable result of extended periods of hard exercise, something we’ve found out the hard way on numerous occasions. It has to be said that there are some Muddymoles who also manage to experience these effects without the need for any kind of exercise but that’s just called gluttony. 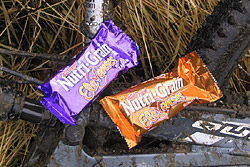 Rather than try to beat off hunger with a big stick, which offers limited nutritional value and wreaks havoc with your digestion, we have tried out various forms of nutritional rocket fuel over the years, including supplies of raisins, energy bars (bleurghh), malt loaf, beer, and of course refreshments from local cake stops in the area.

By far the best compromise we’ve found in recent months have been Kellogg’s Elevenses bars (or Kellogg’s Nutri Grain Elevenses bars to give them their full and slightly unwieldy title), which can be had in six packs from most supermarkets for a price per bar of around 28p.

Available in two flavours, Raisin and Ginger, they’re basically soft, sweet, chewy and yes, let’s be honest, moist which means they don’t suck your mouth dry as you chew them. Both flavours have their fans amongst us with the author shamelessly swinging both ways on this score.

We rates these bars because:

Obviously we wouldn’t want to claim these could ever take the place of a well deserved bacon roll but when you’re five miles from home and starting to flag they sure come in handy!

For the pedants, here are Kellogg’s official nutritional values for the bars: