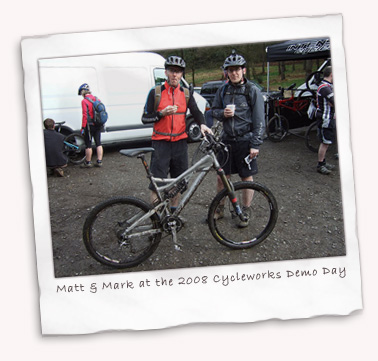 So Sunday saw the annual tribe meet at Holmbury St. Mary for a few laps of the hill at the Cycleworks Demo Day.

Looking at today’s weather, how lucky were they – and us? Hearing about the impending 80mph winds before the event had me thinking ‘OK, a bit of weather, no problem. That’ll make it more fun’. Now I’m just glad the storm arrived Monday instead of 24 hours earlier.

So how was the day? Well, pretty good. The event was really well attended and it was good to see the growing number of people we know through this MTB lark. There was a huge selection of bikes, the Orange crew were laid back as ever, Marin and Whyte were well represented and the Intense guy was nothing if not particular in how the bikes were set up. At least this year they were running the kind of equipment you expect to see on burly bikes.

Even Specialized had provided – OK made available – a whole raft of brand new out-of-the-box bikes to try, mostly in fetching test bike colours.

Best of all, the cakes provided by the dueling mothers were first class and greatly appreciated. I’m hoping Dave, in cake guru mode, will grace us with his extended judgements of which cake was best. Me, I’m voting for the flapjacks.

So a big thanks to Cycleworks for once again organising a great day out. There were even a few prospective lay-deee riders and a spin round the lanes on some road bikes for the really enthusiastic. Something for everybody.

I’ll post my reviews of the bikes I rode separately over the next few days or so. For now, here’s our photos of the 2008 Cycleworks Demo Day on Flickr.

Filed under Lifestyle, Mutterings in March 2008