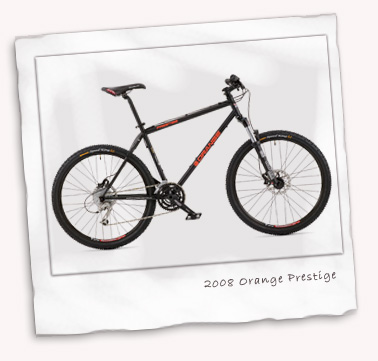 If you think of Orange, chances are you’ll find yourself thinking of their headline grabbing bikes – the Patriot and Five for anyone with some aggressive comfort in mind, and the P7 or Sub-Zero for those who just want to be aggressive. But if you look at their range of bikes there’s a whole spread of machines to cater for most tastes, including entry level aluminium hardtails, fast riding race bikes and a brace of new-for-2008 hardtail models, the Vit-T and the Prestige.

OK, so the Vit-T is pretty much a one-off, it’s titanium loveliness limited to just 21 bikes to celebrate the company’s 21st birthday. But Orange have also updated one of their classic framesets from times past to mark their anniversary slightly differently. The 2008 Prestige is the result, featuring Tange CroMo tubing on it’s Limited Edition frameset (although I’m not sure what this edition is limited to). It’s been updated to take modern forkage but focusses firmly at the more conservative end of the travel debate, featuring a 100mm Rock Shox fork in either Tora or Recon flavours.

When this bike was first announced it really interested me. I have two of Halifax’s bike industry classics, an Orange Five and a classic 26″ geared On-one Inbred so was curious to see how the Prestige stacked up against them. Plus, I love the word Tange so that was a bonus. Not only do Tange have a reputation for quality but disturbingly I link it with both the words ‘tang’ and ‘flange’. Oh dear!

I got to try the Orange Prestige at the 2008 Cycleworks demo day at Holmbury St. Mary in early March. The model I tried was the tange-topping (I’m at it again) 17″ XT with a Rock Shox Recon Race fork, but before riding it was interesting to see the frame up close and to find it was dramatically different to my On-one.

First, the tubing is slender, particularly the chain and seatstays which arrow out from the main frame with no concession to modern kinkage (there’s a topical pun about Max Mosley here but let’s face it, his activities are as old as the hills). The tubes are narrow and taper dramatically at the dropouts, while the top and down tubes are equally svelte. Right from the off it’s clear this bike is much less butch than the bulk of the P7.

Second, it’s black, fashionably black in fact with a matt finish that I’ll call faux powdercoat. The graphics are a squared off eighties confection in bright neon orange which I don’t really warm to, certainly not a patch on the mod inspired logos on my Five which nonetheless have proved to be disappointingly impermanent. I can’t vouch for these ones but woud be happy to lose them.

Overall though it certainly looks promising, with a good quality Shimano XT drivetrain, Hope hub’ed wheels and Avid Juicy 5 brakes complimenting the Recon Race fork up front. It’s kind of how you’d expect your first ‘proper’ MTB to have ended up looking if you’d just kept it and upgraded it over the years although of course the geometry would be all-to-pot with a 100mm fork on it. Nonetheless, the modern kit/retro frame shape looks immediately different.

Let’s be honest, six or seven miles over Holmbury is a poor test for an unusual bike like this, particularly when I have spent so much of the past months on my Five. But you certainly get a feel for this bike’s characteristics pretty quickly. Initially, looking only at the spec and frame I thought there’d be some comparison with my On-one but that wasn’t really the case, at least not in terms of similarities.

Orange’s 17″ frame has a 2cm shorter effective top tube compared to the One-one’s 16″ frame and the result is a more cramped feeling cockpit. The Prestige harks back to a time when manufacturers were trying to get their steel bikes as stiff as possible while On-one have openly scorned that approach, preferring to embrace a degree of flex to the benefit of the ride.

The result is that the Prestige, despite initial thoughts about it’s slender lines, is actually a pretty stiff platform to go riding on. This is a great benefit when kicking out of slower turns, where you can really pile the power on quickly and really gives the feeling that not an ounce of your effort is being wasted.

In fact, it reminded me of my 1998 Marin Muirwoods, a bike it is much closer to spiritually than the On-one (I hope that doesn’t seem a negative comment, I loved my Muirwoods. But it really was a bike about efficiency rather than ride quality).

Over the rougher stuff though the bike’s ride was telling and I think it may be partly due to the fork, not just the frame. Rock Shox’s Recon is a decent fork but I felt it was a little out of it’s depth at times which may have been a result of an inherent fork issue or just poor set up.

Fast, ladder roots conspired to get the front end packing down, steepening the angles and making the bike feel quite twitchy as well as creating tiredness and a bit of numbness from the vibrations. I managed to get the bike to go as fast as I think it would go (correction, as fast as I could go), spurred on by having Dave pursue me down the fast stuff on the Intense 6.6 but it was hard work, needing constant vigilance to make it behave.

It’s probably true to say that this kind of 10/10ths riding is not really what the bike is about though. Scale it back a notch on the lumpy stuff (or slap some older Fox Vanilla’s on) and I reckon it would be a blast, but it certainly won’t be keeping up with more modern machinery. I found myself wishing for my Five when I had Dave breathing down my neck that’s for sure.

Where the bike would excel though would be short, smooth race courses where the efficient frame would really give the rider an advantage. I’d suggest a larger frame size than you’d normally expect to get a more stretched out riding position or you could go fully retro and start experimenting with longer stems. But that way flat bars and lycra lie.

It’s an interesting bike, the Orange Prestige. It offers an unusual blend of retro looks and modern equipment and really is a nice stiff platform to go riding on. At heart, it wants to go fast, the back end keeps to the script but the front end seems to suffer from a poor fork or fork setup. Maybe I’m over-used these days to more than 100mm of travel or maybe what it really wants is a Reba up front?

If you take it racing, the shorter races are where you want to be, if you take it somewhere rougher I’d think carefully about spec. One things for sure though, six miles is not a fair chance to make an impression for this machine as I reckon some more XC oriented miles would show it in a better light.

The jury’s out but I think it’s likely that this course was not really for this horse.

Filed under Bikes, Reviews in April 2008