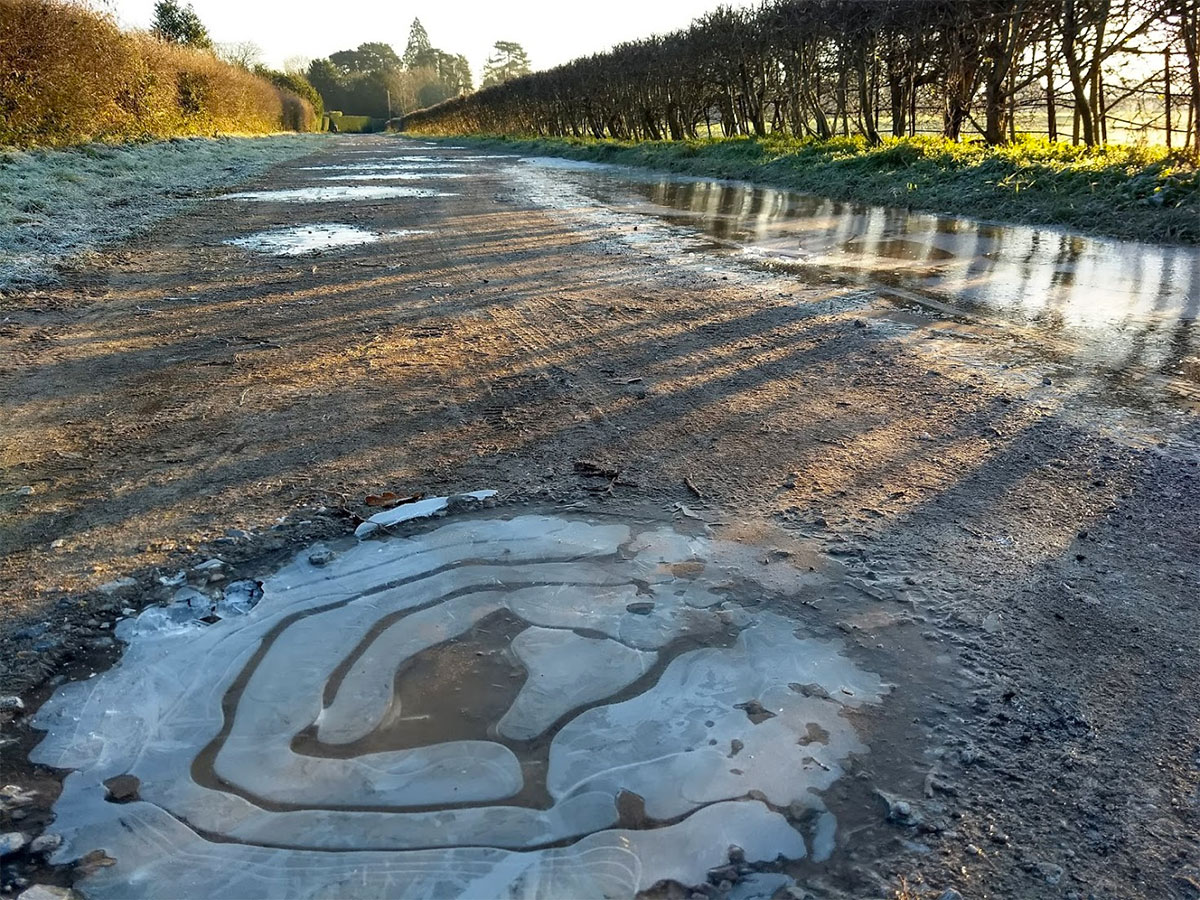 This morning was supposed to be another routine ride in to work, a practice I’ve now got down to a pretty solid habit. Twice a week, week in, week out for months now I have cycled a roughly 30 mile commuting round trip.

Sadly, the weather was just too wet for me this morning. Riding home in the rain is one thing but the Moles have a clear rule – if it’s raining, don’t go out! I like to ride whatever the conditions but today was caught out by a lack of forward planning on my part – my Gore ‘waterproof’ jacket needs re-proofing and my gravel bike – new this year – hasn’t yet grown mudguards.

Why do I commute by bike?

The main reason is fitness; I like the thought that the weekly miles are ‘in the bank’ even if I get pulled in different directions at the weekend sometimes. It’s worked OK for me with a gradual half-stone weight drop over the year so far (that may creep up as the autumn munchies arrive).

Then there’s the environmental angle. I’m increasingly of the view that driving 150 miles to work each week is ridiculous and the more I can reduce that the better. I’m at the point where the environmental benefits of commuting could become my main motivation.

I’ve actually started to toy with the idea of the family becoming a one-car household, with an e-bike to handle errands and the rest of the commuting week. I figure with some judicious working-from-home when the weather is really bad I could easily make it work (although my wife is not so keen!).

Finally, there’s the simple pleasure of riding a bike. Commuting can be fraught, but my route options to Reigate afford a reasonable (but not complete) separation from drivers and it’s a rare day that I can’t appreciate some aspect of the ride. My gravel bike makes any road journey about 10 times more comfortable than a regular road bike, and there are MTB options too.

Those drivers can be cool or crazy of course; sometimes they utterly disgust me. Instead of being the classic angry cyclist I’ve tried to flip things round the other way. When a driver shows respect or extra care, I acknowledge it with a wave or a thumbs up and have amazingly received the odd thumbs up in return – most recently from a driver of a skip lorry.

It feels a lot better; instead of the urban scofflaw approach I don’t see any harm in sitting behind traffic in a queue if it’s not safe to move forward, or even pulling over at a safe point when you know you are holding vehicles up. I don’t mean being hesitant; if I need to take a lane, I’ll take a lane. I mean understanding the bigger picture and riding accordingly. It’s not a fool-proof approach but I think it’s the best way to stay sane! 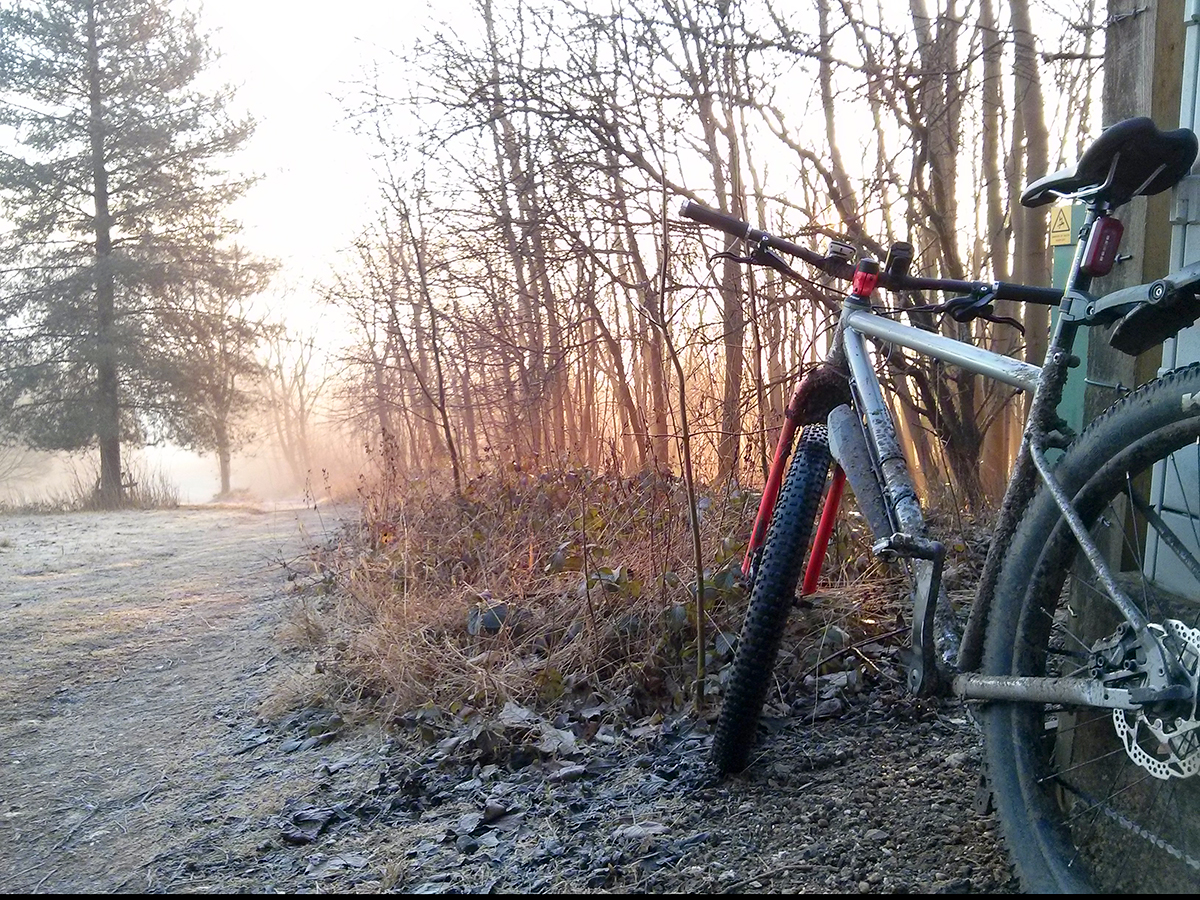 Getting ready for winter cycle commuting

Once you’ve established your motivation and habit, the biggest challenge to cycle commuting is always the weather.

It’s actually surprisingly rare to get rained on to be honest, but winter weather offers a lot more variables than just rain. You also have the dark, the cold and the wind to contend with. If you are riding off-road, assume your worst challenge will be the trail itself but if you are on the road, the weather conditions are the biggest factor. First and foremost, let’s talk about the wet.

The wettest I have ever been is riding home on my road bike in a downpour with no mudguards. So my top advice is… get some decent mudguards! Even if it is not raining, surface water on a road bike will chuck huge volumes of water at you so work on the basis that if it’s not actually raining, it was just a short time ago!

I have recently bought SKS Bluemels 45 mudguards for my gravel bike which should provide full coverage front and rear. The Bluemels mudguards will also sit high enough to provide some mud clearance when I take the bike off-road in mucky conditions. We’re not talking heavy mud, just the stuff that sits over hardpack surfaces like the Coach Road across the golf course at Brockham.

If you are on the mountain bike, get yourself some decent mudguards too and to hell with the look of things. I have a Mudhugger on the rear of my mountain bike which works to cut out most of the cack, and a nice Crud XL fender on the front which is excellent.

Dealing with the dark

You have two things to think about with dark winter evenings. The first thing is being seen on the road.

I normally run a headlamp on flash mode all year round when I’m commuting (I can’t think of a reason not to really) and I also have an extremely bright flashing rear lamp – a Moon Arcturus – which chucks out a massive amount of light. I even have saddle brackets on multiple bikes so I can switch the rear lamp between bikes as necessary with the minimum of fuss.

More importantly, the big winter challenge is seeing where you are going. The trip to Reigate and back involves a lot of miles on dark unlit country lanes so I need a bright light, but I don’t want to blind oncoming traffic.

The best solution I’ve found is the Ravemen PR1200 which has become my go-to choice, as it has a high power output, a remote button to switch between settings and crucially it has a dipped beam mode. I have rarely found high-powered road lights that have this feature and it is brilliant, especially as I can angle the lamp to the side, away from vehicles if I have to.

Off-road, I rely on the Lezyne Super Drive 1250XXL. It’s OK but I would prefer a better lamp like one of the Exposure models to eke out run time and power.

People always think that the cold is the biggest issue when winter cycling but it really isn’t. It’s just a case of getting the right balance of layers to keep warm.

I find a long sleeve base layer, with a thermal Roubaix-style long sleeve riding jersey over the top is generally enough.

If it’s windy or wet then a light Gore shell will block both the wind or the rain. Even better if the rain isn’t heavy, I have a Sportful Giara softshell jacket which is windproof and provides a lot of warm protection without the shell for the minimum of bulk.

I tend not to ride on the road if the weather drops below 0° centigrade for fear of ice on untreated roads. I will ride off-road in really cold conditions but given the extra physical effort involved I still manage to stay plenty warm!

For my hands, I like to use Gore Windstopper softshell gloves which provide warmth and flexibility. If possible, white or silver is a good option so they can be seen when signalling – I find reflective details are a bonus but generally too small to really indicate my intentions to other road users. White is better as it’s also easier to see in daylight hours.

So there you have it. My thoughts around commuting through the winter months, which today’s rain gave us just a foretaste of. I prefer those long summer evenings of course, but with a little careful thought and a positive approach winter riding can be just as rewarding. Remember too – it’s still better than being stuck in a car!

Filed under Lifestyle, Mutterings in September 2019