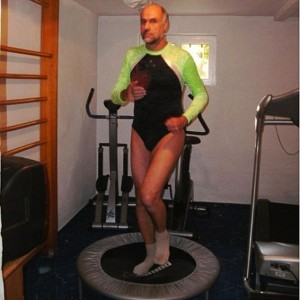 The other day I stumbled across this photo of D’Andy working hard at maintaining his model good looks in what looks disturbingly like a Muddymoles mankini. Or his daughter’s leotard.

Well, I guess you can’t be out shredding the gnarr all the time!! 🙂