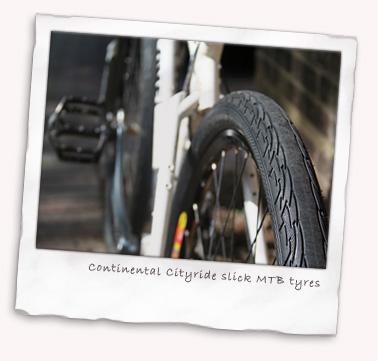 The other day, prompted by my recent speculations on getting some road riding in Colin dropped some slick MTB tyres round that he’s been teasing himself with. So, they’re now fitted to my On-one and pumped up to about 50psi!

(Thanks Colin by the way for wafting the tang of bike riding under my nose again – it’s been too long!)

The tyres are Continental Cityrides with a maximum pressure rating of 58psi (not as high as I expected) and a width of 1.75 that has a central slick section and some light grooves around the edge to disperse water. Far narrower than anything I’ve had on my bike for years, they cut an incongruous dash when teamed with my flat pedals on the On-one!

As you can guess, this is an early experiment with riding the dark side so things are far from optimised. Even so the difference compared to my old Continental 2.3 Verticals is immense and I’ve been very pleasantly surprised with how quiet the ride is and how relatively effortlessly they roll. I must have really missed riding these past weeks to be excited over a brief mile round the block to check out both my collarbone and the tyres at the same time!

My plans for road riding (which feels a bit like trespass on an MTB) are a bit further advanced than last week but I’ve still nothing to actually ride other than the On-one. I have ordered some Fatboy slicks at Felix and Rob’s suggestion though which come in a svelte 1.25 so watch this space.

As for the shoulder, it’s getting there but I’m being very ginger. I can manage a bit of a ride though which leaves me a bit sore but hopefully I’ll be fully saddled up soon.

More photos of the slick tyres on my On-one MTB are on Flickr.