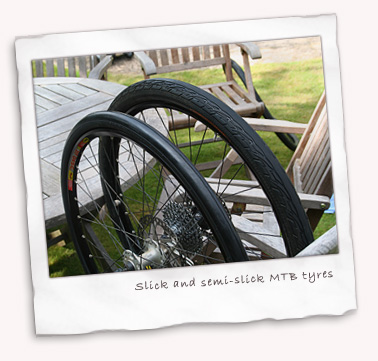 Ok, I promised I’d cut down on the slick tyre ramblings but having just fitted a pair of Specialized Fatboy slick MTB tyres at the recommendation of Felix and Rob I thought I can’t pass up the opportunity for a review.

So first of all, why slick MTB tyres? Well, in my case I don’t have a road bike so in order to get some mileage in while my collarbone heals properly I thought I’d get out on the road.

MTB treads tend to drag far too much for comfortable progress on the road and can be a bit squirmy in the corners so it makes sense to try slicks. In the real world most people would probably find a benefit from slicks if they plan to commute to work, saving vital energy for the slog home!

There’s two ways to get MTB slicks, the super skinny approach such as these Specialized Fatboy tyres which comes with no tread, 1.25 width and puncture protection, or a larger carcass ‘halfway house’ route such as the Continental Cityride 1.5 slicks I tried last week. The main benefit really is that the larger tyre means you can get away with a standard MTB inner tube rather than the 1-1.15 type I had to buy for the Fatboys, at extra cost. In use, the larger tyre also has a slightly softer ride due to the extra volume.

Having tried the Cityride tyres I was a bit dubious about bothering with the expense of the Fatboys but since I’d gone ahead and ordered them anyway (and knowing Colin would want his back at some stage) I thought I’d give them a try. And was very surprised by them.

I expected them to have a harsh ride — not a bit of it, in practice they rolled as close as dammit to the Cityrides that I tried earlier. Smooth over tarmac they absorbed the bumps much more generously than I had hoped. This was admittedly helped by the Marzocchi Marathon forks up front and the inherently compliant nature of my Inbred classic but it was still a good performance.

The main benefit over the Cityrides was actually weight – when you add the smaller carcass and lightweight tubes together they’re a lot lighter than you’d think. So small was the profile of the tyres I actually had to recalibrate my speedo, you can see the difference quite clearly in the picture (there’s more for comparison on Flickr). My On-one just looks bizarre with such undersized wheels on it.

Overall, I’m pretty pleased. With slicks it’s not that you put in any less work than with standard tyres, it’s just that you tend to travel more quickly over a given distance. Even in my weakened state I managed 15.4mph average over six miles today with a pretty stiff headwind.

You focus much more on the rhythm of the ride, your cadence etc. and you become noticeably reluctant to slow down below the pace you’ve set yourself with the result that although you’d think you’d have an easier time with slicks you get home just as exhausted, if not more so than ever.

I bit of mental adjustment needed there I think. I mean, what am I trying to prove! Anyway, if you commute, think seriously about these tyres.