We don’t often review gloves*. Mostly, they don’t last long enough or create enough of an impression but the Brisker gloves by 100% have become my favourite Spring and Autumn glove.

In fact, they are decent for much of Winter too, depending on where you live. So, what makes the Brisker so special?

First off, a word about gloves in general. There are two basic schools of thought with gloves; you either go maximum protection with hands like The Thing in the Fantastic Four (an option Karlos has been forced to pursue over the years) or you go with the barely there, nearly nude style. I prefer lighter gloves but definitely want some protection in addition to the extra grip a pair of gloves provide. That’s protection from the elements, protection to my palms and protection to my digits.

With the Brisker you are closer to the barely there end of the scale but they come with a little extra something that keeps them out of chocolate teapot territory and puts them firmly into the everyday useful zone.

That extra something is a padded, foamy soft-shell layer to the back of the hand and fingers, fitted to a no-frills palm. The protection works to give a little cushioning from impacts but it’s main benefit is to provide just enough windproof insulation to stop your digits freezing on cool, damp mornings or in light to moderate rain. It does this really well when the conditions feel, well, I guess you’d say brisk!

The gloves feels like regular gloves but remain a nice place to be even if the temperatures dip to quite low levels (assuming you are working steadily). I reckon down to something around 3-5°C is fine, while at the uppper end I’ve ridden in these into the mid teens (say 15-16°C). The beauty of the soft-shell layer is that – while not being waterproof – they manage quite well when it rains too. The soft-shell absorbs the moisture first which then warms up to keep your hands at a fairly even temperature. I never really find them to be unpleasantly sweaty either. 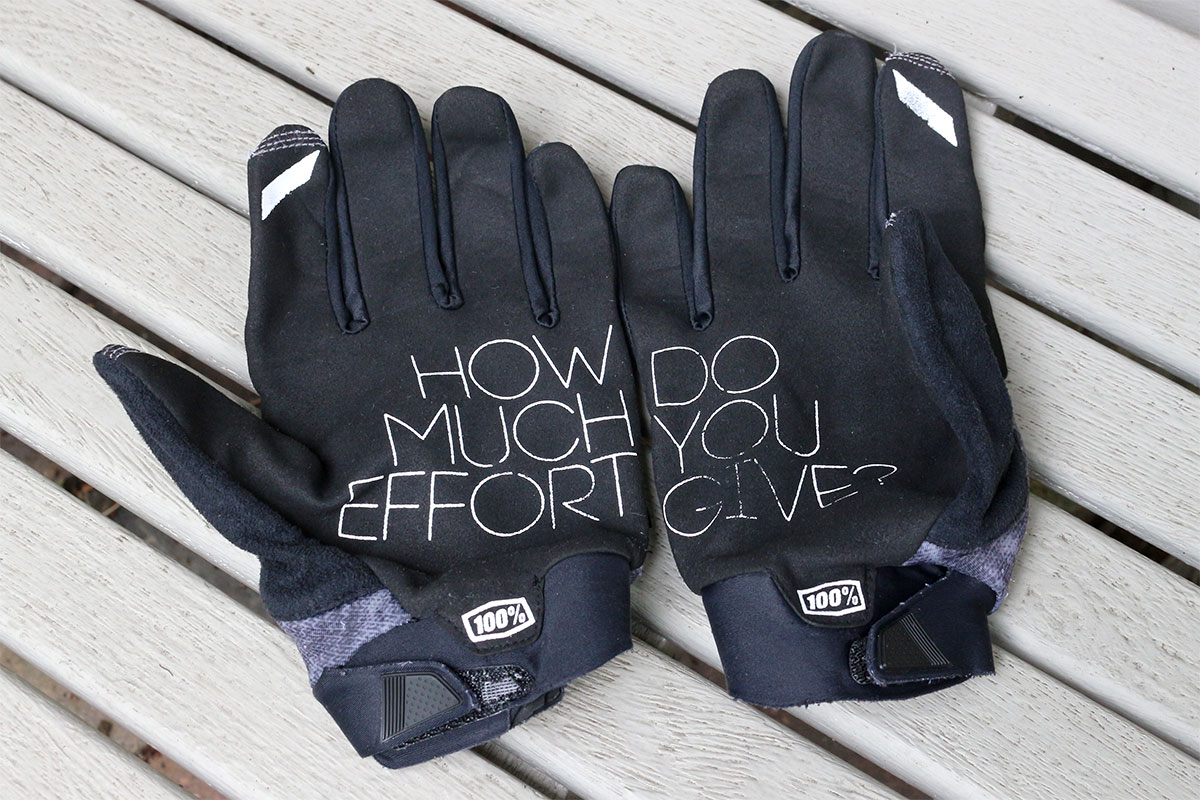 The palm, as I mentioned earlier, is a no-frills affair. I would normally prefer a lightly padded palm but have found the Ergon GA3 grips so comfortable that the lack of glove padding is not a problem. In fact, it is an asset as you can better feel what’s going on at the bars. The palms have a thin silicon script to aid grip which spells ‘HOW MUCH EFFORT DO YOU GIVE?’ when you put your hands together. I always wonder what people think of someone holding up a ‘DO YOU GIVE?’ message when I hold up a hand to acknowledge good driving or something!

There is also some ‘conductive’ material on the finger tips for phone fumbling but personally I just take the glove off. I can’t read the screen terribly well these days anyway… A deal breaker for me is the need for thumb wipe ‘functionality’ which I’m pleased to say the Brisker gloves have.

The 100% Brisker gloves come in a range of colours but it seems the choice is more limited than in the past – the fluoro options are pretty bright but I am sold on the grey heather style that looks like it’s knitted.

Women fair worse for colours though, with just two options (black or fluoro pink). I find myself wondering what makes a women’s glove anyway other than just small size? Someone technical will probably tell me there’s more to it than marketing perhaps. Personally I’d like an olive option for gravel, or sky blue and orange or purple options so I can co-ordinate with my bikes, but that’s just me!

All in all, I really recommend the 100% Brisker glove. I’ve had mine for over 18 months and used them in a wide range of conditions and they are still holding up well with little sign of wear. When gloves seem to fall apart after just a few rides, the Briskers make a nice change. The only area I am underwhelmed by is the reflective 100% script on the first and index fingers – I’d like to think it shines up nicely under car headlights but I remain unconvinced thus far.

As a final word, there is also a Hydromatic version available which claims greater waterproofing qualities via an extra lining and a longer cuff but presumably foregoes a little of the breathability. That might suit colder rides better I guess.

* Andrew did actually review a LOT of his glove experiences!

Filed under Clothing, Reviews in August 2021