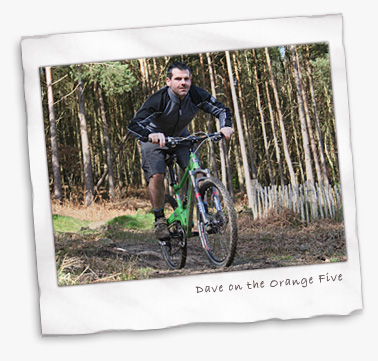 Poor start to the year health wise and hence fitness almost totally absent but with an eye on a new full susser I headed for the hills.

The weather was remarkable, the Sun shone and the day was almost warm. I’d been suffering from a cold, which although had flared up the week before felt like it had been with me for nearly 6 weeks. Cycling had been somewhat curtailed because of this and my fitness overall was poor, not to mention reduced breathing on the day itself.

Anyway, I’d cancelled my “booked” rides a few days before in order to give Cycleworks a chance to fill them, so I was riding what was spare. In order of riding was the Whyte E5 XT, Marin Rift Zone and Orange 5 Pro.

What can I tell you from a 3 mile ride? The Whyte which I loved last year felt “normal”, the Marin, which granted was a size too small, felt “interesting” but I noted the very steep ramp up on the rear suspension.

Which brings me too the Orange 5. Now I’ve been riding actively for nearly 8 years and in that time I’ve got more aggressive in my riding, certainly faster downhill, so I class myself as a competent rider. The 5 let me power uphill on the first section of the ride (remember this was my 3rd ride) and just seemed to make my life easy there after.

On one downhill section I had a massive front end slide in mud but the bike felt controlled and I was never in any danger. It also felt solid and sounded quiet (my Marin MV is a bit of an amplifier when it comes to noise). In fact the greatest compliment that I can give to the 5 is that it felt like my On-One 456 and that’s a very, very good thing.

So… 16″ or 18″ but perhaps more importantly, normal lacquer or sparkle lacquer?