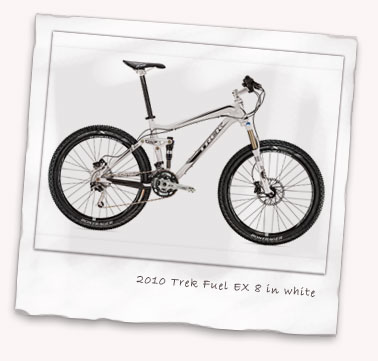 As a owner of a 2009 Trek Fuel EX 8 I was very interested to see the details of the new 2010 Fuel EX 8 and to see if there had been any great leaps in technology or if it was a case of gradual evolution over the 2009 model. Well checking out the 2010 model there have been some changes but not all for good for us mountain bikers.

Looking at the 2010 Fuel EX 8 the main changes for this year appear to be tweaks in the suspension technology. Trickle down of technology from higher up in last years Fuel range have brought the 1.125 to 1.5 tapered steerer to the EX 8 for the first time and the even larger air volume rear shock, seen mainly in the Fisher Roscoe range last year.

These changes should give a slightly stiffer front end and an even plusher rear (Roscoe’s rear suspension got rave reviews last year), all good stuff, but it was surprising to see the front suspension drop from 130mm to 120mm. The new larger can rear ends would surely be better matched to a 130-140mm fork like with the Roscoes since it will be seriously plush. You have to go up to the EX 9 to get a 15mm bolt through fork, but with the tapered steerer and only 120mm the front shock should be plenty stiff enough.

Other parts of the 2010 bike are much the same as the 2009 bike. Same overall suspension, same gears, same geometry, same finishing kit. Last years SLX chainset has been upgraded to XT but wheels seem to have been downgraded from last year’s Rhythm to this year’s Dusters. This years colour of choice – all white—the choice of fast bikers!—is available but this years paint scheme is much toned down.

All good you might think, so where are the downsides. Well it’s mainly price. The 2009 bike retailed at £1750 and the 2010 bike will retail at £2000. That’s quite a price hike for the minimal number of changes on this year’s bike. Currently there are a number of 2009 bikes available on-line for around £1550-1600 which makes these seem like a bargain. Grab one while you can!

Given the price increase for the 2010 Fuel EX 8 it makes sense to also consider the EX 6. If you can live with the RockShox Recon rather Fox fork then at £1600 is seems to be possibly closer to the sweet spot of the range.

The 2009 Fuel EX 8 is quite an exceptional handler as I have found over the last 7 months. With the changes here the 2010 is just going to build on this performance!

Filed under Bikes, Reviews in September 2009