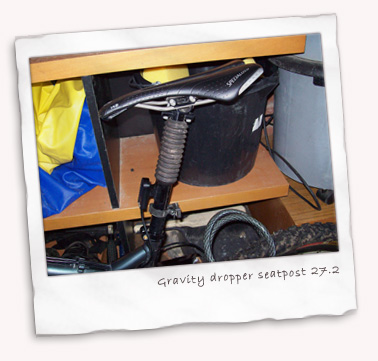 Having now owned two different types of adjustable seatpost, the Crank Brothers Joplin (formerly the Maverick Speedball) and the Gravity Dropper seatpost, I thought people might be interested in my thoughts on the two designs.

My first introduction into the world of dropping seatposts (and painfully, the price of them) was the Cranks Bros Joplin post.

I went into Cycleworks with the aim of buying a post with the lever under the saddle but Dave did a number on me, selling me the benefits of having a remote thumb operated lever on the bars (in hindsight his views were spot on). £179.99 lighter, off I went.

From day one I could tell the post would need insulating from the North Downs mud, so a Lizard Skin originally intended for a thin rear chainstay went on to protect the workings. Up to and until selling the post 8 months later mine worked fine, but many other people using them have reported problems due to mud getting inside the sliding part of the post so the Lizard Skin was a good move.

The Joplin post works like an office chair with a gas strut inside, this makes for a nice smooth movement and you can release the post anywhere through its 3″ of travel to tailor the height you wanted.

The post quickly developed wear allowing the saddle to move a few millimetres in a 360 degrees direction due to play developing between the slider and post, this never worsened but wasn’t really in keeping with the retail price of the item.

The only annoyance of fitting is taming the cable, as the cable is fitted to the top of the post. When it is dropped some 3—4inches of excess cable has to somehow distribute itself between the handlebar and seat post, usually as a large loop of cable outer hanging off the back of the post ready to snag a passing tree…

After owning the Joplin/Speedball I knew I wanted some form of dropping post for my Turner 5 Spot. As it turned out I had to go with the Gravity Dropper due to my frame requiring a 27.2mm seat post diameter. The Joplin design is only available in larger diameters so the Gravity Dropper was the only choice.

This time when I visited Cycleworks I found Dave, some 8 months down the line from the release of the Joplin/Speedball seatpost, now saying the Joplin is plagued with failures and swearing by the Gravity Dropper instead!

The Gravity Dropper in use feels very agricultural compared to the Joplin. It works using a retaining pin that is moved with magnets, so you push the lever, the pin moves backwards, the post can go up/down. You release the lever and the pin re-seats itself to lock the post in position. It’s not as professionally finished as the Joplin but it does work very effectively.

The cable is fitted to the lower, static part of the post, so the cable doesn’t change length when the post is used (solving the snag the Joplin has) and the post can be re-greased while fitted to the bike (again bettering the Joplin which needs removing). And unlike the Joplin, so far it hasn’t developed any play, perhaps because it comes fitted with a rubber sock keeping 95% of the muck out of the post workings.

Its priced nearly the same at £155, is slightly uglier with the protruding part on the front of the post for the magnets and cable attachment, but once you adjust to its function its brilliant, I can’t live without it.

Are the posts worth the current retail prices? Probably not… but is the convenience of being able to drop the saddle at a moments notice and keep the flow of a ride going worth having? Definitely.

The Joplin was more intuitive to use, hit the thumb lever and down goes the post, whereas the Gravity Dropper needs the saddle unweighted before dropping and that crucial element took more adjusting to than you’d expect after using the Joplin for 8 months previously.

In an ideal world I prefer the thumb lever action of the Joplin but favour the Gravity Dropper in all other respects. Also the Joplin I had was a 3inch drop, with the Gravity Dropper I moved up to a 4inch drop and would suggest that’s the ideal travel rate to really make best use of moving the saddle out of the way.

In the real world, riding the Surrey Hills you can arrive at (say) Deliverance, drop the post just as you start the decent and flick it back up at the bottom. The ride suddenly flows and is much more enjoyable. I feel like I use the post as much as I change gear (I know this is an exaggeration) but riding Barry Knows Best, I drop between fully down, mid way and full height multiple times as I descend the route.

If you’re always changing (or would like to change) your saddle height when you’re out on the trails and have some spare cash it’s well worth considering.

Filed under Components, Reviews in December 2008 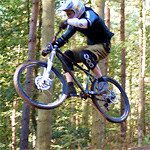 James rides Summer Lightning most weeks, it remains his favourite all time trail.