After months of planning with military precision (well actually a few emails in which I forgot to consider the need to take our own toilet rolls), the MM’s Wales weekender was finally upon us (Matt, Dave C, Mark, Jem, Jez, Dave P, Simon, Rob and me).

Leaving Friday morning with a van full of 9 bikes (big up to Jem) we arrived at the faultless Bryn Bettws Log Cabins in time to hit ‘The Wall’. Very handy really, with marker number 36 of The Wall being only 100yds down the road from our base for the weekend. 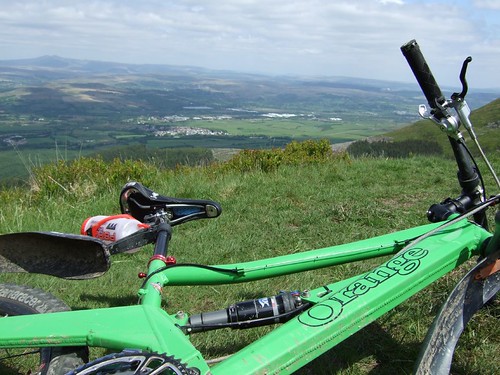 So, we headed out for a taster of what was to come and from thereon, didn’t come down from the high, during which we tackled all the trails Afan has to offer. Oh, not much then really.

The Wall
Rude awakening or what! No warm up, no forest road climb to limber up. Oh no, straight into the flat out Zig Zag descent. Exciting but daunting without having the luxury of dialling ourselves in. Noticed getting a few sideways glances from the others wondering if I was working in cahoots with their respective partners to engineer life insurance claims. Equally notice a few riders with ridiculously silly wide grins, wondering what was next.
Whites Level
How can a 4 mile climb at the beginning of a trail be fun?? Dunno really but it was, particularly if you try to make it up all the way without dabbing. A quick play on the black run berms at the top got us ready to tackle the all-new Energy Trail section. Don’t let anyone talk you out of tackling this if you ever go to Afan. It is a trail building work of art and orgasmic fun, whatever your level of riding.
Penhydd
My memories of Penhydd were not brilliant due to several offs the last time I rode it. However, my new found skill (?) and speed (mostly thanks to having a decent bike now), meant we all really hit this trail HARD. Hidden Valley, Sidewinder and Dead Sheep Gulley were without doubt the best 20 minutes of riding I have ever experienced, coinciding with the best 20 minutes of riding technique/effort I have ever strung together. We were on it. The assembled group at the bottom must have looked like a day out organised by the LSD Appreciation Society – we were all soooo charged up. Penhydd proved to be favourite amongst a few of us, with Dave P the most enthusiastic of the clan about it-chanting about it until the early hours!
Skyline
Other than Rob (who joined us Saturday night) we all struggled a bit with this due to the previous two days. But Grand Canyon, On the Edge, Handy Andy and Joyrider helped to lift the spirits and reward us for the long fireroad climbs.
The rock garden crossing will stay with me forever, particularly all of us shouting and screaming at Mark as the last one to make his way across. After the evil climb near the end, all moaning and whinging stopped as realisation struck we had reached the last section – 6kms of very fast, very challenging singletrack that tested our skills and stamina. I was determined not to let my fatigue ruin this for me and Rob kindly donated some Haribo sweets to pick me up. We flew down and whilst my riding was noticeably more ragged-edge due to the tiredness, I gave it my all and took plenty of air (relative to me, not Travis Pastrana) where possible, actually sucking the bike up off some of the big ledges and making a good fist of it.

We rounded up by having a mammoth late lunch at the DropOff Café and headed back, exhausted and elated in equal measure.

Trying/struggling to keep up with (and ahead of sometimes) Matt, Jem and Jez on my hardtail has certainly made me learn a lot about riding but weekends away like this are about more than MTB. The camaraderie and banter within the group was as you would expect and its been great to get to know the all the group much better.

I think they’ve forgiven me for frequently misleading them when asked how long the next climb was, how far till the end, etc etc. I wasn’t lying, promise, it was a motivational technique.

If I’m lucky enough to go to Afan again, I will most definitely ride Penhydd again (cutting out the pointless loop between markers 8 and 11) but the main mission will be to do a hybrid killer trail, combining Whites, the Energy Trail and climbing back up to do a bastardised version of Skyline, heading across the fireroad to marker 56 (Handy Andy) from marker 18 in order to experience Joyrider and the 6km run-in once more.

Best get training for it.

Filed under Reviews, Trails & Trail Centres in May 2008