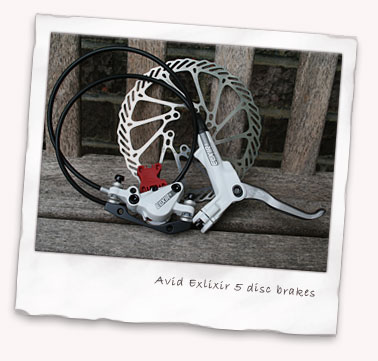 Yesterday I mentioned I was planning a ride to work on my rejuvenated Inbred singlespeed. Part of that process of bringing the Inbred up to date has been replacing the old skool Hope Mini brakes with new Avid Elixir 5 disc brakes.

Avid Elixir 5’s? I hear you ask. Yes indeed, the Elixir technology that first appeared in their top-end and spendy CR and CR Mag flavours has filtered down through the range.

This means you get Taperbore technology, where the reservoir and piston are now inline for a more streamlined effect and reach adjustment, albeit with the need to get an Allen key out rather than turn a dial. The benefit is a sleek lever design and if you have smaller hands (or perhaps are fe-mole) you have the opportunity to get the lever reach just so.

There’s no means to tweak the pad clearance though, but personally I think that’s a solution I have no real need for.

My reasons for swapping brakes were several. First of all, my old Mini’s have done their time. In need of a decent bleed, I’ve put that job off for ages and found the performance has inevitably dropped off to the point where they offered limited braking power. I know, a decently set up Mini is pretty effective but I just felt the time was right for a change.

Another reason was I’ve just replaced my 2003 Marzocchi Marathon coil fork with a Rock Shox Reba which requires a post mount adaptor. I didn’t really fancy the idea of an adaptor and a 203mm disc on a singlespeed – far too much overkill for me.

Finally, Merlin Cycles are currently offering the complete Avid Elixir kit (front and rear callipers and levers, fully bled, ready-to-fit with 160mm discs) for just £135. Yes, that correct, £135 or just £67 per wheel. That’s a bargain in my book; throw in the not insignificant fact that these brakes are white and I just couldn’t resist!

So, a day later I had myself a nice parcel arrive from Merlin. Over the course of the weekend I removed the fork, replaced it with the Reba and took the old Minis off before fitting the brakes. Despite having everything I needed in the kit and despite needing to tighten only 10 bolts in total (4 for the two lever mounts, 2 for the front post and 4 for the rear IS adaptor and post mount) it still took me nearly 2 and a half hours to do this simple job.

I don’t know why that was either. Probably my garage works to a different time zone to everywhere else – you go in there and while only an hour passes in your world, up to half a day can disappear elsewhere. It’s quite a problem.

Honestly though, despite the time I spent, this was a really simple job that even someone with my unique skill set can accomplish. If anything the rear hose is a touch too long (probably ideal for a full-sus machine) but it’s not a huge issue which can be sorted out when I eventually bleed the brakes in about three years time. Finally, the brakes were fitted and ready to roll.

In use these brakes are quite different to my Minis. The lever is, if anything a bit chunkier with a broad, flat blade but you do notice it’s not got the hewn-from-solid-aluminium feel to it that Hope specialise in. But it’s perfectly acceptable and once I’d got a few hard stops under my belt it felt very comfortable to me. The reach adjustment I’m sure is very useful to riders with smaller hands but my hands are quite big and the levers felt fine as they were.

As for braking performance, this is significantly ahead of the Minis. Smooth, well modulated, powerful and other subjective terms spring to mind with the added bonus of no noise! My goodness Minis can squeal when they’re not spot on and on a singlespeed that noise can really mess with your zen!

As the pads bedded in during the course of the ride I could really feel their braking performance increasing. By the time I came down off the chalky descent at Colley Hill (near Reigate) this morning, slick with damp and debris washed down from recent rains I felt completely comfortable with the feedback and stopping power these brakes were providing. It’s enough of a workout to realise that these brakes are going to be very effective partners to my winter singlespeeding.

If you’re looking for an effective disc brake at a bargain price then this could be the brake for you. They’re lighter than my Hope Minis and certainly lighter than the Hope Mono M4s I run on the Five yet they offer strong performance. Most other brakes are considerably more, I looked at the (pink) Hope Monos but they were £110, plus £30 for a rotor per end! I just couldn’t justify that cost.

Anyway, these brakes are in white. Did I mention that!!?

Filed under Brakes, Reviews in October 2009