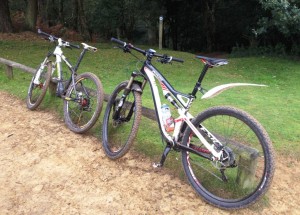 Having decided that a 29er was the thing for me I did all the “wrong” things. I didn’t go to a demo day, pour over the MTB magazines or ask the hive wisdom of the MuddyMoles forum which bike to choose. Instead I went on impulse into to a bike shop and tried a few bikes for size.

My initial first choice (being somewhat of an Orange fanboi / multiple Orange owner over the last 20yrs!) was an Orange Giro, their 29er version of a 5. However it just didn’t fit me and it wouldn’t ever have been right. Next were a couple of Specialized bikes, the Epic and the Camber. Again the Epic just didn’t feel right, mainly too short in the top tube, so it was the Camber.

In the flesh – it’s a 2012 – it’s a long bike, although not heavy. Dominating the look is the front triangle. It looks like it’s been liberated from some sort of huge industrial spar, it’s massive. The aluminium rear triangle looks skinny in comparison. The headtube is also oversize, as is the BB30 bottom bracket (which the bike shop admitted aren’t the most reliable of units and which almost put me off). Hence with the OS theme you won’t be finding any flex. Also strangely it had a QR front axle and a 142mm rear through axle. I would have preferred a front Maxle or similar, but it never seemed to cause an issue.

The drivetrain is 10speed (a first for one of my MTB) with a dual ring front chainset, with Fox fork / shock and Specialised wheels, a wide bar and stem finishing things off. The only changes made were the addition of a Specialised mechanical dropper post (with very neat through the frame cabling), bottle cage and mudguards. The gears have been fine although the chainset is a bit basic looking.

Normally the thing to do when you have bought a new bike is to take it out on a short test ride to make sure everything is working and bedded in. However not doing things the expected way seemed to be the theme for this bike. The first ride was a +50 mile epic across the Surrey hills (see picture of us at the Leigh Hill tea stop) with Barrie, followed the next week by another 50 mile ride. Big first test rides for sure.

In fact since I bought this bike, with the exception of a day at Peaslake, I’ve average +40 miles on every ride. So what’s it like? Well everything that you possibly expected of a 29er. Fast to cover ground, somewhat slow and clumsy to accelerate in tight singletrack or short climbs. Although maybe a lighter set of wheels/tyres might improve this. The sheer speed that you sometimes pick up, as the wheels skip over small trail obstacles, can certainly lead to issues with using up all of the available 110mm travel. I can honestly say that I used the full travel on this bike every ride, which is quite unusual for me. It is very comfortable and cushioning, with the excellent Fox suspension and 4 bar linkage set-up, up until the suspension hits the stop. Drop offs and trails strewn with smaller rocks were no problem. Basically it’s fast, almost too fast for its own good at times.

Where would be it’s ideal use? Maybe on a 100 miler of fast trails like the South Downs Way in a day (sometime this summer, if it’s not like last year) or on one of the smoother trail centres like Brechfa, or the North Downs. Where is it least suited? Tight gnarly tracks. After a day at Peaslake I was wishing for my Orange 5 or Trek Fuel. Either of which would have been much more fun.

Any other points to note? Well saddles are highly personal and although there are some Specialised Henge devotees amongst the Muddymoles, I’m not one! A Fizik XM will replace the Henge at some point. Also the Specialised stem the Camber came with was an affront to anyone’s views of good aesthetics. It was changed for a Ritchey item. I’m now very much a fan of the Specialised Command post. Not quite as nice to use as my Joplin4 but the best mechanical post I’ve used.

Usually I can make my mind up about a bike very quickly. It’s either love (and I keep the bike for a long time) or hate (and I move the bike on). It’s been 4 months since I bought the Camber and it’s only now that I feel absolutely “right” on it. I think that’s because it’s not a “do everything” bike and it took me a while to figure it out. To be honest it’s not the first bike that I’d pick out of the garage unless it’s going to be a big day on fast trails. Hopefully the summer of 2013 will have plenty of days for me like that on the Camber.

Filed under Bikes in January 2013