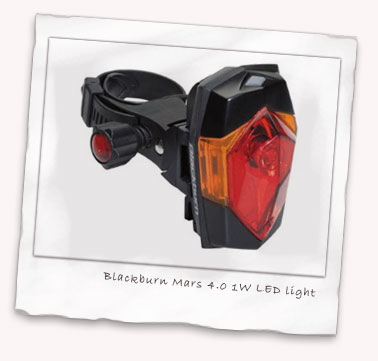 At the beginning of winter I had a think about what I really needed for my bike. I came to conclusion that what was really needed (as opposed to wanted) was decent bike lights so that I’d be able to get out whenever I fancied during the months of darkness.

Having solved the front light problem with the Exposure MaXx-D light I had the problem of what to do about the rear. Exposure have the RedEye which uses a 1W LED to put out a lot of red light, all in a smart CNC machined body, but it needs a power cable from the back of the front unit to power it. This is a hassle as the whole point of Exposure lights is their cable free design, plus it would add an extra drain to the front light’s battery. At £35 there’s no denying it’s also pretty expensive.

After a bit of searching though I discovered the Blackburn Mars 4.0 on Wiggle which also uses a 1W LED but comes with two additional side LEDs in amber for added visibility. At £17 it was half the price of the Exposure offering so it’s an easy win on the value for money front.

The Mars 4.0 also has a versatile mounting system which includes a belt clip and around 150 claimed hours of flashing runtime. On the downside there’s just two modes, constant or flashing with no fancy ‘rave’ mode available.

I have to confess I once ‘owned’ a Mars 3.0. I say owned but really it was no more than a brief acquaintance as it parted company with my bike for the eager embrace of the trail pixies within a mile of me setting out. No sign was ever found, despite it putting out an almost offensive amount of red light, much to my disappointment. So I was a bit reluctant to drop more money on Blackburn but the prospect of having an even brighter rear light was too much.

How is it in practice? Well, firstly after a few rides I still have the light which is a big step forward. I’ll probably use some wire to properly fix it to the bracket just to put my mind at rest but really it seems quite secure. It’s a nice discreet design so fits neatly onto the seatpost under my saddle, not as streamlined as those long Cateye efforts but much more compact.

As for light output, well suffice to say if Dave has comprehensively won the front light arms race, I’m a big player from the rear— fnaar!! This light is so bright that it wouldn’t look out of place in Vegas and I’ve been (so far) politely asked to turn it off several times by various riders following. It’s truly retina searing, perhaps too much so on the hills although riding with this on the road makes you feel very secure. Catch it at the wrong angle and the light output can be quite intensely painful.

The only problem I see is that the on/off switch is quite small and easy to fumble with gloves on so turning it off requires a stop and a careful prod to make it stop. This is a hassle but is more than made up for in terms of visibility to other road users when you’re heading to and from the trailhead. Who really needs a light when your on the trails anyway? For that I still have my much weaker bog-standard Cateye wired to my Camelbak so people can at least keep track of me.

In conclusion, amazing light output from that 1W LED (I think it’s actually muzzled to one third output), a nice design, great side visibility but a faffy switch and perhaps too much light, depending on your perspective. I reckon it would win hands down any commuter light contest though.

Filed under Lights, Reviews in January 2009