For those of us lucky enough to have the Surrey Hills on our doorstep we’re never far away from a regular diet of fun, fast entertainment. Many of us don’t even need a car to experience the thrills of mountain biking, being able to ride directly from home. 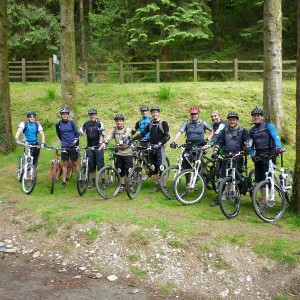 As a result it’s a bit of a mental effort for us to think about riding further afield, maybe more so than most other riders. Having said that, we do of course like to try other places. The (newly crisped) Swinley springs to mind, plus Jez and D’Andy are newly returned from North Wales and of course we celebrated the Royal Wedding with a Hindhead ride. But if you want to up the gnarl factor without travelling an unfeasable distance from Surrey, South Wales is always a good bet.

This weekend saw a bunch of us on an MTB road-trip to visit both Brechfa Forest and Afan on the flimsy pretence that it was Jez’s Stag weekend, as if we needed that as an excuse. Well, it was his Stag weekend – as we collectively shrugged to our better halves in explanation – but Jez had rather astutely decided to use the Bryn Bettws cabins as our base and had built the weekend around one of his favourite activities: mountain biking. How could anyone resist?

Friday morning saw a well organised evacuation of Surrey and the South East to converge on Brechfa for an afternoon of Red and Black trails. It’s a long drive and even leaving at around 7:30am it was close to the 1:00pm start time by the time we arrived. Must be all that ‘Costa time’ built into the itinary as as so many of us find ourselves willingly in thrall to the caffeine fairy, to the extent that you could easily believe an encyclopaedic knowledge of motorway coffee stops is an important part of a mountain bikers skill set.

So fuelled on adrenalin, wine gums, caffeine and in the case of Jez’s best man Neil and brother Steve I imagine a deep sense of what-have-we-got-into forboding, we set off from the Brechfa car park on the Red Gorlech trail. It was a big group, with Jez joined by DaveW, Tony, D’Andy, Jem, Keith, Neil, Steve and myself, plus a couple of new riders, Colin and Lee.

Now the thing about riding down big hills is that invariably you need to ride up them first. So it proved and the banter soon gave way to a more subdued effort at winching ourselves up the hill only to find the section at the top with the tree stump steps was closed for tree management. We were forced to remain fireroad-bound for long enough to drop all our height down a long hill and then drag ourselves back up again. In all I don’t think we got to any singletrack worth it’s name for six miles of hot humid riding. 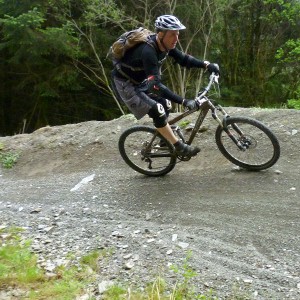 When the trail finally turned interesting though it was worth the wait as it quickly became clear that a lot of thought had been put into it. Without any effort I could ramble from one cliche to another in attempting to describe the trail but I won’t.

I won’t drop into hyperbole mainly because I am blessed with both a wide vocabulary and a very short memory which means that although I can’t remember where we went and what we did, I do recall that the trail writhed through the woods over a surface of disconcertingly damp and raw looking slate, interrupted by big berms and shaken up by a series of sudden plunges and equally sharp crests as the trail bucked over complexes of kickers and tables. There was air if you dared but I was more interested in smoothing things out, particularly since this was the first bit of singletrack of the day and recalibrating from six miles of fireroad takes a while.

So, Gorlech had put it’s cards on the tabletop and it carried on in that vein from there. Gradually riders started to find space to ride without bunching, mainly because DaveW seemed able to disappear into the distance at will while the rest gave chase. He was riding hard and had the fitness to capitalise. As with any decent trail you find it has a particular rythmn once you’ve reached a certain pace so that the berms start to flow into a satisfying series of left, right, left, quick squirt on the straight, brake, left, right, dropoff and so on as you progress through the forest.

Occassionally progress is slowed as the trail heads up again but it still seems to flow sweetly and you soon find yourself dropping back down the hillside once more. A highlight was sweeping right into a huge roll in which reminded me a little of the big drop into Car Park Number 9 at Holmbury except it was paved with big granite slabs. It gave you just enough time to think woahh! before you realised it was just a fast but straight plunge down as you let off the brakes. It’s followed by a sudden rise up the other side, a front brake dab stopping you understeering off the trail as it sweeps back to the left. 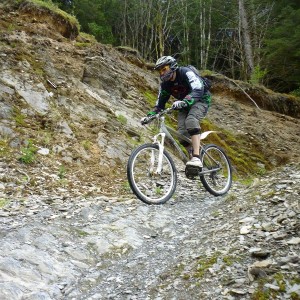 A few hundred yards further on and you are spat out onto fireroad once more via a large, loose cinder berm. DaveW, Tony and I were soon joined by Keith but after that we had an increasingly anxious wait as no-one appeared for a good five minutes or more. Fortunately there were no injuries as the new riders endured a real baptism!

Eventually we reached the point where the Red Gorlech trail diverges from the Black Raven to head back down into Brechfa. A smaller group continued onto the Raven while others chose to get back to the car park and make progress toward the Afan cabins.

Initially the Raven looked to be more of the same in terms of fireroads but this was misleading. The singletrack was both more extensive and more intense and it soon had our attention. It was similar to the Gorlech but bigger and frankly more tiring. We found ourselves hooning over enormous tabletops, off-camber trails, exposed rock slabs and many, many berms as we dropped down toward the car park at Byrgwm. It was such a mental effort as your concentration was tested to the max.

Our return proved to be equally testing. The extensive singletrack takes you on one of the longest climbs I’ve seen at a trail centre, a real slog with DaveW once again leading the way. We were never really in touch with him but having dropped the group he then proceeded to stay ahead of myself, Tony and Keith right to the top of the climb. I was probably 40 metres from him at that point but by then Keith and Tony had both backed off, feeling the effects of Enduro racing and a bad back respectively. Very impressive Dave!

After this we picked up a series of incredibly slippery berms which gave up some of the height we’d gained via a surface which frankly was a lottery. Keith had a minor stack but it was definitely a difficult section.

The route soon lead us on to a really gnarly section of wet, off-camber, slate-surfaced, terror-inducing berms which created mayhem for us. At one point as you plunge down the hillside it looks as though you’re about to ride into a wall of slate before you’re forcibly led round to the next turn as height is lost at a speed I found hard to manage. Following Colin, it was so steep there was no chance to do anything other than try and check your speed and hold your line down what must be some of the biggest stuff I’ve ridden.

I got down in one piece but I know I was close to a stack as I neared the end. Colin tumbled gently off the trail and over the bars but further back Keith wasn’t so lucky. A long wait ensued as Colin and I calmed down before eventually Tony appeared to say Keith had hit the wall quite hard. Another ten minutes later the others appeared with a shaken and sore Keith who’d basically slammed hard into the slate wall with deep cuts and bruises to show for it but luckily nothing broken.

After a few minutes to let things settle we continued on with several riders now feeling the effects of a long technical ride. My main concern was to keep an eye on Keith who had taken quite a knock but it seemed the trail lead forever upward, with unrelenting climbs gradually stringing out our group of broken riders. Finally though we reached the intersection where the Raven and Gorlech trails meet and we turned gratefully toward the car park.

The fun wasn’t over yet though as the Gorlech had some further surprises up its sleeve in the form of more of those big sweeping berms we’d seen all day. The final run felt like BKB on steroids which in a way it is and managed to raise a smile from even the weariest rider. After 23 miles of technical riding we were all exhausted but Colin and Lee headed off for some Brokeback Mountain biking bromance in the river while the rest of us changed. Rumours of a walrus being sighted are completely unfounded I understand.

An excellent start to the weekend, and a truly impressive trail centre which makes big demands of you. I reckon you could easily get just as much satisfaction out of a couple of laps of the Red if you didn’t fancy the Black.

Coming up in part 2. Cockles and bacon, White’s Level and bike parks.

Filed under Reviews, Trails & Trail Centres in May 2011