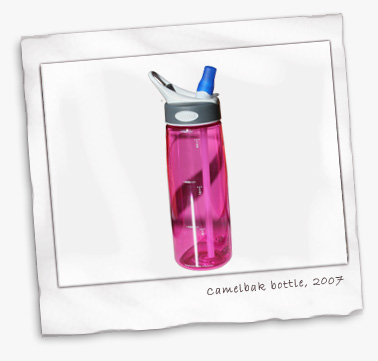 For 2007, Camelbak have finally done what most people doubted they ever would. Produced a traditional water bottle.

Of course, Camelbak being Camelbak they couldn’t just produce a simple water bottle. So, from the pioneers of hydration comes their take on the humble bottle.

First of all, it won’t fit into a bottle cage on a bike. Alright, it doesn’t look as though it will – to be fair I haven’t tried it since all my Mountain Bikes are now sans cages, but with the striking translucent polycarbonate body of the bottle you probably wouldn’t want to scrape it in and out of a mucky bottle cage anyway.

More obviously, Camelbak have engineered their trademarked Big Bite valve into the top of the bottle which is connected to a straw that reaches to the bottom of the bottle. This allows a hydrator (I’m getting into Camelbak’s water terminology now) to hydrate themselves without having to tip their head. Users of Camelbaks bladder ‘n’ packs will feel right at home. So if it did fit into a bottle cage, that would be a handy feature to have.

Finally, the bottle can handle a wide range of temperature extremes. You can chuck in boiling water (more tea Vicar?) or freeze the contents overnight to give maximum refreshment options, although there is no insulation to keep the liquids at your chosen temperature.

The bottle comes in a range of vibrant colours, plus the obligatory trail colours like grey, black and camo brown. I bought the one you see in the picture for my wife as a Christmas present as she goes to the gym a lot. This is the ideal place to use it I guess and lets you run on the running machine without fear of risking your dignity by tripping over your own feet.

Overall, a clever update on the tired concept of the water bottle. It’s tough, novel and I’m actually tempted to get a less strident looking one for my desk at work that I could use in times of stress as a kind of comforter, in the same way my young sons have their drinks bottles.

I guess most Camelbak stockists will supply the bottle. Our Camelbak bottle came from Cycleworks who were surprised at their popularity – it seems to appeal to the whole fitness/cycling/outdoor market.

If anyone can confirm whether or not they fit a bottle cage I’ll update the article.

Filed under Accessories, Reviews in May 2007