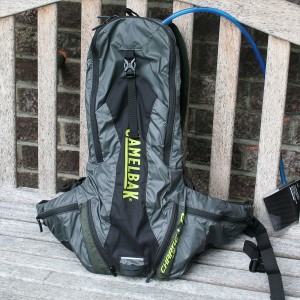 It’s not often I buy new hydration packs. Generally I stick to Camelbaks and they tend to last a long time; in fact I have an old Lobo from 2003 which is still serviceable.

What caught my eye with the Charge LR though was what those initials stand for. Lumbar Region. Well, that and a decent discount from Wiggle!

Actually, for sometime now I’ve been thinking of updating my back pack. I have two, the old Lobo I mentioned and a Mule dating back to 2007. Both have lasted well, but recently the bladders have shown signs of deterioration, partly I think due to using High 5 Zero tabs in them. For one reason or another there is now a coating on the inside which I just can’t shift. Yuck!

Rather than fork out for a new bladder though, I thought I’d see if I could better the Mule. Generally it’s stood up to years of riding without issue but I’ve often felt it was overkill for the sort of out-and-back riding we tend to do. It has a huge capacity when tackling longer rides but for most of the time I run it with the main compartment empty, meaning I need to cinch down the straps. This means when I need to open it – and coupled with the heavyweight ballistic nylon used – it’s an absolute pain in the backside to get into. 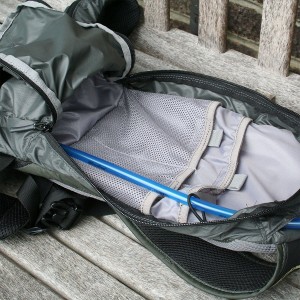 Enter the Charge. This is made from much lighter ripstop type nylon, meaning the zips are more flexible and easier to open which is a big plus for me. Time will tell if it is any less durable. The pack features a large main compartment which is separated into four distinct sections – a large velcro secured pocket, plus two more in front of that and then the compartment itself which is probably about 12-13 inches tall. Plenty of space for a pump, multitool, spare tube, rag and a tubeless repair kit to be held securely.

Once closed, there’s a large outer pocket which can easily hold a waterproof or hastily discarded outer if the weather ever proves to be too warm.

The pack also has two zippered side pockets on the hips which can easily hold money, several gels or snacks and a phone. The beauty of this is that you can reach them without having to remove the pack from your back.

The reason the hip pockets are there is because the pack has a special bladder which is positioned low down, around your lumbar region. This partially wraps the hips, giving a platform for side pockets, but more importantly putting the weight low down also. This is good for your back as it takes the strain off the shoulders and making the whole pack feel very stable, as it lowers your centre of gravity. This is quite noticeable when you are riding and although I haven’t tried a longer ride yet I’m hoping it will help keep shoulder fatigue away.

On singletrack there’s an added bonus as the tall and narrow shape of the upper pack gives much more freedom of movement to your shoulders. 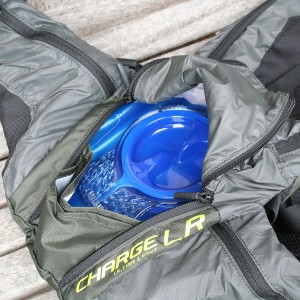 The bladder is one of Camelbak’s latest Antidote designs, structured to help keep it’s shape in the pack (there’s additional tensioning straps to keep pack pressure positive). It features the Quick Link system which lets you detach the hose without leakage and the Quick Fill cap which now needs less effort to open and close. Antidote bladder also have small arms which can be opened to help dry the bladder and there’s even a special little pocket on the pack for the fill handle to sit into so the bladder doesn’t collapse down.

So all in all I’m very impressed by my new Camelbak. The Charge LR corrects many of the niggles I’ve experienced from long-term ownership of the Mule. It’s lighter, easier to access, has those handy side pockets and a much better bladder than my old packs and it seems to ride better too. When you think a new bladder would have set me back over £25 anyway it’s something of a bargain.

Time will tell if it’s as durable but it comes with a lifetime guarantee so I’m hopeful!!

Filed under Accessories, Reviews in July 2012