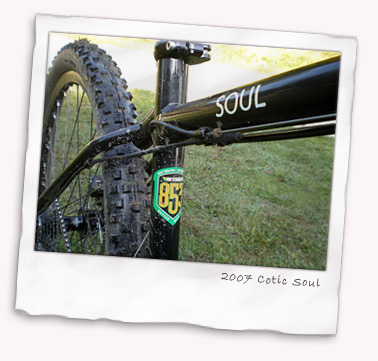 The classic steel hardtail has seen somewhat of a revival in recent years. Whilst some manufacturers — Orange with their P7 spring to mind — have had a steel thoroughbred in the stable for years, it seems the emergence of ‘smaller’ brands into the mainstream like On-One, Cotic, Sanderson, Dialled Bikes and Pipedream (to name but a few) have put steel steeds firmly back on the map.

Mountain biking seems naturally suited to niches and the MTB fraternity waste no time in categorising the latest trends. We have Ti bikes, singlespeeds, 29ers, 96ers, 69ers, rigid, steel, the list goes on. You could even argue we have niches within niches. However, the one ‘niche’ that has interested me recently is the growing trend for long travel steel hardtails from the likes of our local Dialled Bikes (see Colin’s Prince Albert review), Brant’s On-One (see Matt’s On-one Inbred review) and Cy Turner’s Cotic.

After riding a full suspension bike since 2004 — a Specialized Stumpy — it was, I suppose, natural to think at the end of last year of upgrading to a newer model. I’m not in the position to be owning multiple bikes so it had to be a strict replacement rather than an addition to any fleet. I could have gone for a five inch full suss bike, maybe higher. After all, the availability of ‘all mountain’ bikes is now far more wide ranging than when I’d last been in the market.

Instead, and this maybe a surprise to some, I had actually decided to go back to basics. It was time to get myself a hardtail again, albeit the new breed capable of taking a longer fork.

At the end of the day, I missed the simplicity of previous incarnations I’d owned and a hardtail is obviously a bit lighter on the service bills too. Moreover, and a question I asked myself on numerous occasions, do the trails I ride on a regular basis really demand the excesses of an ‘all mountain’ machine? Not a discussion for today at least.

After extensive research of the current options — and a lengthy chat with Cy Turner at Cycle 07 — I opted for the Cotic Soul. The first thing that strikes you about the Soul (other than the cost — at £420 frame only, it’s not the cheapest steel frame on the market) is it’s a good looking bike, albeit a tad strange with its skinny tubing out back, making you wonder whether it really is going to stand up to the rigours of our sport.

Based around an 853 Reynolds front triangle, the Soul has a slack head angle meaning it comfortably takes a fork up to 130mm — I’m currently running some 08 Air U-Turn Revelations which have so far been excellent. Its compact design and sloping top tube combine well to give you a bike that’s chuckable, responsive and capable of handling aggressive riding when conditions demand. 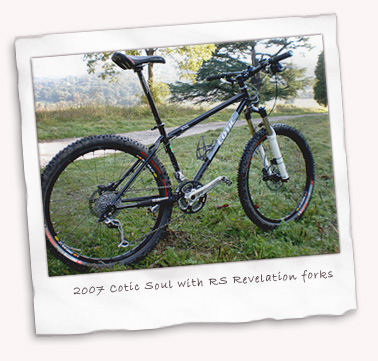 As its steel you can really feel the frame working in your favour on bumpy terrain. OK, I can’t just plough through stuff, but my teeth, if not my contact lenses, are still in place at the end of a rocky or rooty descent. Designed in the UK, for UK riders, means it also takes into account the less than favourable conditions we ride in pretty much all year round so has plenty of mud clearance.

In almost a year of riding it’s coped brilliantly with anything I’ve thrown at it — our own local trails traversing the North Downs and Surrey Hills, South and North Wales’s finest centres, South Downs slogs, I could go on. It climbs well, its snappy through twisty singletrack and gives plenty of confidence on long flowing descents.

Just like you shouldn’t judge a book by its cover, when you get on the Soul, you’ll forget all about those skinny tubes and first impressions. On closer inspection you’ll appreciate the rear end does cut the mustard and the extra gussets just behind the bottom bracket shell give it the reinforcements needed to tackle the worst of the lumpy stuff.

A short stem up front keeps you in full control of the front end, whilst the long top tube offers a comfortable riding position for all day adventures. It really is an awesome go anywhere bike that will have you grinning like a Cheshire cat every time you ride it.

Cotic go as far to say that it might be the last bike you’ll ever need. Well I may just have to rethink my policy on multiple bikes, because as the name suggests, this bike really is now part of my soul.

Additional photos of my Cotic Soul hardtail are on Flickr.

Filed under Bikes, Reviews in September 2008