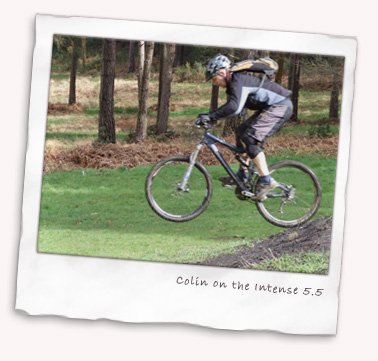 This was my first Cycleworks demo day and what a blast. The day started by signing-in and enjoying the buzz of riders arriving, pedals in hand and getting the first ride of the day set up.

I’m not in the hunt for a new bike yet, but I know I am going to be pushing my boundaries further as time goes on and a full susser is on the cards one day, maybe at the end of this year. What an excellent opportunity to start the research.

Only now do I realise the massive value of evaluating different bikes, back to back on the same terrain in the same conditions.

I rode 3 bikes and have commented below. Please be aware I am not an expert and the sentiments are very much from my perspective. All 3 are amazing bikes but one man’s food…

A big thank you to Cycleworks for a really well organised event that will become an annual pilgrimage for me as for the other Moles.

Also a big thanks to the ladies who provided the tea and cakes. I don’t think I will ever return from a morning’s cycling again with a net 3000 calorie gain.

Was it the extra ballast of all that cake inside me that made me go faster on the final run downhill or was it the Intense 5.5 ?????????…

I have to admit to being a little intimidated by this machine and regret having it for the first ride when I didn’t know the terrain. It looks fantastic and the coil shock version even more so. As close to a DH rig you can get that won’t crucify you on the normal trails that you may need to tolerate if there’s no uplift available.

Like an animal, I think the bright orange Orange smelt my fear and was saying to me on the downhill bits ‘is that the best you can do, tosser’!

Its climbing ability surprised me as it wasn’t too bad at all and when I let it off the lead on the downhill or bumpy bits it was great fun, but I think you have to be a much higher level rider to form an accurate opinion when reviewing it. Its not made to be ridden at 70 or 80% and therefore to say it left me a little unimpressed merely reflects the fact I’m not gifted (or mad) enough to have ridden it at 100% +.

So, great bike, but I handed it back a little subdued and wishing I had just ridden the route on my Prince Albert. Hence I haven’t written much about it as I don’t think I’m qualified to comment !

Next up, I opted for a very different steed – their latest offering and first foray away from the trusty single pivot set up.

I hadn’t originally booked this ride but when I bumped into Dave from Cycleworks on this very bike up on Leith the week before, I swapped my booking immediately for the ST4. I was smitten and the Apple Green metallic finish really does the design justice.

As a relative newcomer, when I read in mags about how a bike accelerates like a whippit etc, I’ve often thought ‘What a load of old b…..ks’. Well the ST4 dispels my misconception. This thing does precisely that. How or why that happens I don’t know but it was very noticeable even over the hardtails I’ve ridden.

It climbed very capably although I did find on very steep sections, I had to concentrate to keep the front wheel down – the sharp acceleration didn’t help me in this regard. I didn’t detect any form of bobbing and it did feel like I was pedalling a hardtail, so the shock and linkage worked extremely well.

The twisty singletrack was great fun and its agility and responsiveness came to the fore. I did however ground the pedals out a couple of times which has never happened to me before – maybe the BB is lower than what I’m familiar with.

The final downhill blast was excellent and it responded nicely when one of my attempted manuals over a bumpy section came off. (normal success rate for manuals is 1 in 5!). It was very well balanced and I think it flattered my riding a bit, giving me confidence to stay off the brakes and fly, going exactly where I asked it to go.

Would I buy one? Only if I had the disposable, allowing me to hang it on the wall to look at.

A great bike, but it left me thinking I don’t really see any benefit (for me I stress) over my steely hardtail, which handles that kind of terrain with equal vigour and results.

I think an XC racer would adore this bike and I expect it to be very popular in that fraternity as it can be specced to achieve minimalist weight.

By the time my next bike looms, I will hopefully be into getting more airtime and riding off drops, ladders and suchlike. A 100mm bike isn’t designed for this and I don’t really see a place for it in my future riding stable, which will consist of a boneshaker and a full bouncer, not something pitched in the middle that I don’t see the point of me owning.

And now for something completely different! I don’t think I need to prattle on too much about this bike, sometimes fewer words mean more. If I left it at ‘Wow’ or ‘the muts nuts’ would that give you any clues? 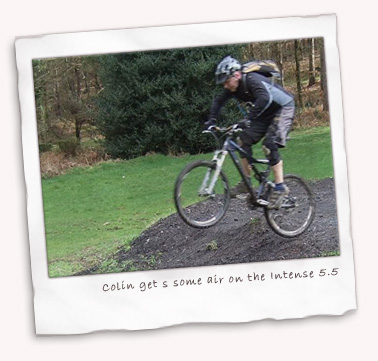 After 20 metres on the first climb, I commented to the guy next to me ‘This is the one’. I loved it. It felt right immediately. Climbed well, tracked superbly, agile on the twisties, hopped nicely and inspired complete confidence on the fast downhill sections.

I cannot say enough how much I enjoyed riding this bike and finished off my circuit by spending 20 minutes jumping off the jump by the village hall-something I’ve never really done before but the bike just egged me on to get involved with the other kids(!) doing the same. Apologies to the ever-so conscientious Intense representative who was looking worried when I eventually gave him the bike back much later than expected.

I can see now why Matt had to decide between this and the Orange 5 last year. It is very close.

But I think he made the correct choice, though for different reasons maybe. I say that because they feel equally matched on a performance basis in virtually every aspect of riding. Where they differ is one has a simple (whilst effective) single pivot suspension system with low maintenance and long life (but cheap to replace) bearings. Its also has ample mud clearance.

The other has a very clever, well-engineered and admirable linkage system that may or may not survive very long in our blessed climate. It also has poor mud clearance with a 2.1 tyre so forget fitting any bigger rubber in except in Summer time.

So for me, it would be the Orange 5 and I seem to be heading the same way as most of the other Moles.

It may look like a fashion thing to those outside of Mole towers with most of them owning the same frame, but it aint. Its function – it works!