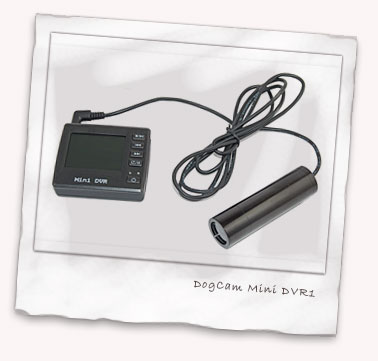 Hang on, I hear you cry, you only bought a ATC5K a few months ago?

Guilty as charged but I’m always on the quest for better and better, hence a bit of a swap has taken place.

A good as the ATC series of cameras from Oregon Scientific are they do seem to suffer from what might well be called “wobble vision”. I think this is the video processor not being able to keep up with the rapidly changing picture as the bikes clatter over roots and stones. This shows itself as an uneven stretching and contracting of the picture and to me, detracts from the overall quality of the footage.

So, without wanting to spend a fortune or to go back to a separate and bulky camcorder, bullet camera arrangement I started to hunt again.

DogCam is a company I’ve seen before as they sell on eBay and from their own website. I get the impression they grew up serving the motor sport market but have since moved into a more general sports market.

The product that caught my eye here was the DogCam Mini DVR1. Not too expensive at £200, tick. Not too bulky, tick, and after an email exchange with Mark at DogCam I decided to give it a go and see if the wobble vision could be banished. The additional advantage is that the bullet camera with the Mini DVR1 is much wider angle of view than the ATC5K and hence the overall “shake” will be less apparent anyway.

So the ATC5K was duly dispatched to a happy eBay bidder and I purchased the Mini DVR1. I was impressed with the overall size, it’s a tiny recorder and typical sized bullet camera. The camera sits easily in the ridges on the helmet and I find it easier to fix it with some double sided Velcro tape from your favourite DIY store with maybe a piece of expanded foam to help get the angle right. The ATC5K was quite heavy to have sat on top of a helmet but the Mini DVR1 is not really noticeable. The recorder sits in a case which I attach to the chest strap of my camel pack. The case isn’t ideal, it really needs something like a soft neoprene bag but it’ll do for now.

So, power up the beast and rotate the camera until things all seem level, press the record button and off we go. On the tiny screen the results look really good as you stop at the end of the trail and play them back. On the PC screen I was not so impressed with the initial results.

I spoke to DogCam about it and then refocused the camera which made some improvement but the results do seem a little soft to me. Whether this is the camera or recorder I’m not sure. I have been offered an upgrade on the camera but that involves a separate power pack for the camera and I think that might push the faff factor over into the red.

I’m going to persevere as the wobble vision is gone. So while I think the vids are a little soft and washed out the overall affect is much more pleasing. If you have an editing package such as Adobe Premiere Elements then can add some colour back in anyway. For me the way the “wobble” has gone is much better and I think you need the Vio POV.1.5 to improve on this two piece package which is another £350.

Have a look on Vimeo and make your mind up. There is some compression on Vimeo but less than YouTube. The latest two vids (Labyrinth and Summer Lightning) are on the Mini DVR1, the Chainbreaker is the only one on the ATC5K, the rest are on the original ATC2K.

Having spoken to Mark at DogCam I have to say that I feel quite comfortable dealing with them as a company. Mark was helpful, honest about what I could expect and very helpful. The focus on the helmet cam has shifted again and we talked through the options including what they were working on with the manufacturers so I’m very happy to recommend the Mini-DVR1 from DogCam as a package that offers a better video image than the ATC range of cameras, at least as far as Mountain Biking is concerned.

The Moles are off to Swinley “en masse” on Sunday so I hope the rain stays off as there should be some more footage coming your way soon!

Filed under Accessories, Reviews in April 2009