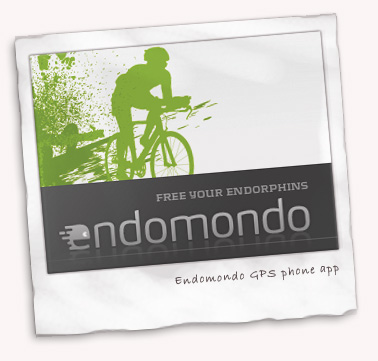 Apps. Apps, apps, apps. It seems the world and his dog has jumped onto the mobile app bandwagon despite there being some debate as to how profitable they can be and the fact they are nothing new. In fact, my understanding is they were around in Egyptian times (I believe Cleopatra was actually bitten by one…).

But. If you happen to have a modern, GPS enabled mobile phone, this route tracking app from Endomondo might be worth checking out.

I was recently contacted by Endomondo, who are doing what many app makers don’t do, which is to actively promote their services to groups that might be interested. For many app makers, this is a fundamental that is often overlooked. It’s no good having a great app if your potential audience are unaware of its existence and relying on App Store rankings means only a tiny few will ever get near the top of the lists.

After an exchange of emails Endomondo generously agreed to make available a suitable phone so I could test the app as I am still in the technological dark ages. A couple of days later an old Nokia N82 landed for me to play with – not quite the latest iPhone I had hoped for but certainly more than enough to get me started with the Endomondo Sports Tracker.

So what does the Endomondo Sports Tracker do?

Well, put simply it uses your device’s built in GPS to track you in a range of activities and then overlays your route, together with a breakdown of performance information onto Google maps. The kind of activities it’s suitable for is pretty much unlimited as long as you’re physically moving and can include cycling (mountain biking!), running, walking, hiking, skiing and so on.

The real beauty of it though is that once the information is on Google maps you can then compare your performance with others, use their routes, challenge users to ‘races’ and so on as well as having an effective sports diary of your activities. In short, it’s a powerful training aid.

How does the Sports Tracker work?

Well, even for a man like me who is yet to come blinking into the light of web-enabled devices (or rather, remains unwilling to pay for the bandwidth!) it is very easy to get this app up and running.

All you do is download it onto your mobile and open a free account if you haven’t already done so via Endomondo’s website. Then, log in, set your activity from a long list provided and hit start. That’s it. The app is now running and records your every move, in terms of distance, speed and height. It automatically sends the information back to Endomondo where it’s added to your account.

At the end of whatever you’re doing, hit ‘End’, go have a shower and you’re ready to start analysing what you’ve done. 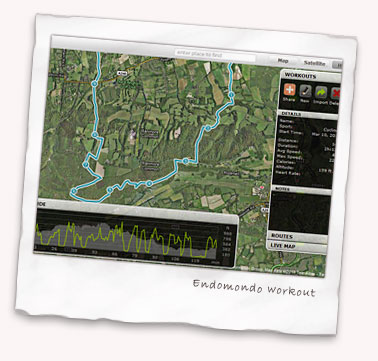 Worth mentioning by the way is that your position is shown in real time on the website when you are out, a feature that could prove very useful in an emergency or if your other half wants to see what you’re up to!

So the data gathering part of the app is essentially as easy as it gets. Endomondo supplied me with an arm band to hold the phone which kept slipping down my arm but that’s just because I didn’t really bother to adjust it that closely and my mountain biking route over to Effingham featured plenty of washboard bumps to shake things around.

As I’ve said before though, the benefits of this app are centred around Endomondo’s excellent website. As soon as I had logged into the site after recording a route I could see it in front of me, telling me I’d recorded 14.8 miles at an average speed of just 6.7 miles an hour (remember it’s recording even when you’re standing still chatting!). It also told me it had taken me 2hrs 13 minutes.

I didn’t record the full route to be honest, firstly because I forgot to start it until I was halfway up Crabtree Lane and secondly because I didn’t want the route tracking me right back to my house, even if the route by default is not shared with anyone apart from me and any friends I chose to show it to. That’s something to bear in mind…

The route was neatly and accurately overlaid on a Google map and alongside is shown my speed and altitude change (it’s fascinating to see my route went from a low of about 159 feet to a high around 999 feet), plus the distance, my maximum speed and my average speeds! Absolutely brilliant!

I can see a real benefit if I was able to use this regularly to build a diary of my activities, measure how I am doing from one month to the next and start to share routes with other users. One caveat here though is that certain activities like mountain biking can result in the odd error as the phone is often under trees and can lose a GPS signal – so it depends on the quality of your phone and your route really.

This is almost good enough for me to consider changing to a better phone. When I do eventually get a GPS phone it’s going straight on for the following reasons:

I recommend it purely because if you carry your phone with you on rides already you’ve nothing to lose but a lot of information to gain.

Here’s a link to my Endomondo Sports Tracker workout.

Endomondo started out in Denmark in 2007 and after spending time developing the technology have grown rapidly with the aim of creating ‘a service that makes sports more exciting and to offer the ability to unite a large group of physically active people’. Their current website has been up and running since July 2009.

The technology is compatible with most GPS mobile phone and Garmin GPS devices – a list of the devices supported is available in Endomondo’s mobile FAQs.

Thanks to all at Endomondo for giving me the chance to try out the Endomondo service.

Filed under Accessories, Reviews in March 2010