I’ve been rather late joining the GPS fraternity. After years of seeing people struggle to follow innocuous lines on their GPS units and still being unable to locate that ‘secret’ deer track off the side of a trail I decided that for me GPS wasn’t worth the cost or effort.

However, things have moved on, allowing me to finally find decent reasons for investing in one. 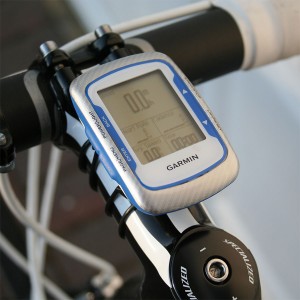 First off, GPS units make very effective bike computers without the need for wheel magnets and cables and other nonsense. Just switch them on and ride off. Secondly, and more importantly has been the development of social media on the internet and sophisticated mapping services like Google’s Maps. It’s now possible to share routes and see exactly where you’ve been. The final point though that has tipped the balance for me has been developing a darkside interest with my first road bike this year. Suddenly stats seem interesting!

So, having looked around at what was available, and at what cost, I finally plumped for the Garmin Edge 500 GPS unit with Heart Monitor and Cadence sensor which I unearthed for less than £200 thanks to Google.

The cadence sensor went on my road bike cranks and measures off the rear triangle using a largish – but basically unobtrusive – sensor unit which also manages to pick up my road speed. The GPS abilities of the unit can do speed anyway but this gives a more accurate reading off a wheel magnet. 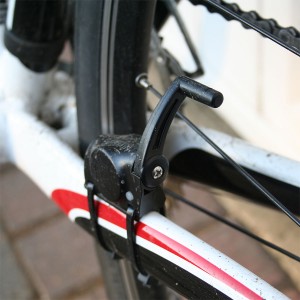 The Heart Rate monitor uses Garmin’s chest strap and has proved unfailingly quick to pick up a reading, unlike the Polar one I used to use. It is also extremely comfortable for me and I recently wore it for 14 hours of the South Downs Way ride without really knowing it was there.

The head unit itself is of course where all the magic takes place and is very compact, measuring just 48mm by 69mm and weighing just 56g. It’s fixed to the bike using an excellent mount that is secured by O-rings, of which Garmin supply several sizes for differing stem and handlebar widths. 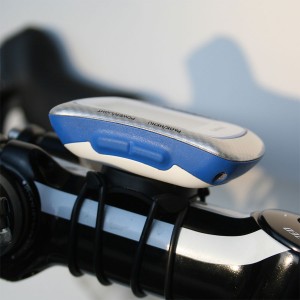 My preferred location is on the stem as the unit takes up so little space but on my MTBs I’ve had to resort to the handlebars because those stems are a bit short and I have a spacer on top of the steerer tube which gets in the way. In all cases the unit has been absolutely rock solid, with no hint of working loose after the quarter turn needed to secure the head unit to the mount. Really it’s possible to fit the unit in a second.

With a few mounts it means I can have one recording device which can be swapped between bikes without any need for recalibrating on adjusting. Fantastic.

Once I’m actually riding the unit records the trail as well as heart rate, speed, altitude and temperature as averages, min and max readings and the same for cadence where a sensor is fitted. The screen can actually be set to show up to eight pieces of information on each of it’s three configurable screens, so I tend to have one showing speed, average speed, cadence, distance and time for the road bike and just speed, distance and time for the mountain bikes, plus the third screen has average speed (again), temperature, elapsed time and a few other things depending on my mood.

Having the cadence sensor for the road bike has been a revelation which I’m certain has helped improve my fitness levels and efficiency as well as helping train my legs to spin at a constant pace off-road where it’s easy to find yourself grinding in far too high a gear. The smoother you get the faster you get, everywhere.

So onto that social media side of things. I haven’t used the GPS facility of the unit at all other than to see where I have been but in theory I can download other riders’ routes and follow a trace on the unit. I can’t comment on this at all but would think it would be better suited to the road where you’d at least get the idea to turn left or right at junctions. 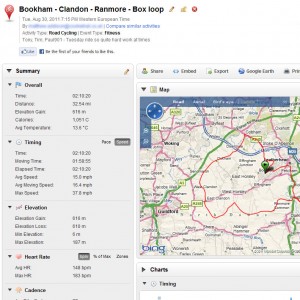 What I have done is use it to compare where I have been against the effort I’ve expended. The Garmin Connect site shows the route overlaid on a Google map, plus graphs for the various parameters, including height gained and lost. You can also play the route where a trace will show a summary of key stats as you follow the route, and see split times. These by default are every five miles but could be set to a different distance or interval I’m sure. I prefer it as it is, especially on the road where I can then tell roughly my speed by how long it takes to complete each five mile section.

What I dislike about Garmin Connect is you can’t choose to share the route with invitees, it’s either fully public or just private to yourself. This is annoying as I don’t really want to share my home location with people I don’t know – I’d prefer to be able to edit that out. So there’s room for development there and they could also build in a challenge facility for groups while they’re at it. Plenty of phone apps do this so why Garmin lags here I don’t know.

So in summary, the Edge 500 has proved to be a very flexible bike computer across several bikes, both on and off-road, with GPS route tracking being first class. It gathers a huge amount of data which I have found rather addictive and is a definite enhancement for me versus a separate bike computer and HR monitor. I haven’t tried to use it to follow a route but it’s easy to share your routes with others, and I’d like to see the Garmin Connect service enhanced.

Filed under Accessories, Reviews in September 2011