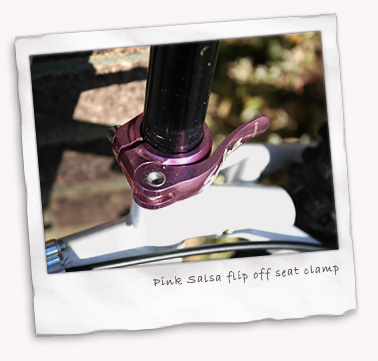 Entering the world bike geekery is almost a right of passage for any self-respecting mountain biker. Self respect is important here, largely because if you take an unhealthy interest in the minutiae of bike parts you can’t exactly go around expecting respect from anyone else!

If you thought the Great Tyre Debate™ was the nadir of mountain biking nerdiness though, think again. Some people get worked up about seat clamps…

Well, I do, to be honest. I find a slipping seat post incredibly annoying when you start a ride with a saddle that’s perfectly positioned for efficient extension of the legs only to find by the time you return home you look more like Coco the Clown on a monkey bike with your knees up round your ears.

Worse still you have to stop repeatedly to adjust the saddle because the cheapo seat clamp that came with the bike (I’m looking at the On-one example as exhibit A) has a weaker grip than a Tokyo Optician with RSI. Things can get so bad that in Mark’s case, for example, he gave up completely and allen-keyed his post permanently at about three inches below where it should be. Mark, your saddle’s too low?! ;o)

So, clearly these things bother me. Plus, it’s always nice to have a bit of seemingly pointless bling on the bike. Over the past few months I’ve had experience of two seat clamps from well respected manufacturers, Salsa and Hope. And it’s fair to say, one product is significantly better than the other.

First off, the Salsa. When I built up my singlespeed project, a theme emerged that provided an outlet to all those products that are available in anodised pink. Which meant that Salsa Cycles’ flip-off seat clamp was an ideal candidate for my bike build.

I was a bit dubious initially as the nearest available size Salsa do for the Inbred is 30mm which is ever so slightly over-sized. I think the ‘correct’ size is supposed to be something like 29.8mm or something. Having read loads about Salsa’s legendary quality though I was keen to give it a go and when it arrived I was very impressed by what I saw. It’s not exactly a light bit of kit for what it is but it has nice organic curves and a long, sweeping clamp arm that has been much copied (by On-one cheapo ones for a start!).

The Salsa is made entirely out of anodised alloy with a brass pivot which helps explain it’s relative weight but this also makes it feel as though this clamp is going to last you a long time. In particular, the long arm let’s you get plenty of leverage without you having to imprint the manufacturer’s name into your palm as you tighten. Always a risk when it’s laser-etched into the anodising!

The Hope flip off clamp also made a favourable impression when I was talked into it by my bike shop. It’s cheaper than the Salsa, is also made of alloy and comes in a choice of anodised colours with laser-etched graphics. 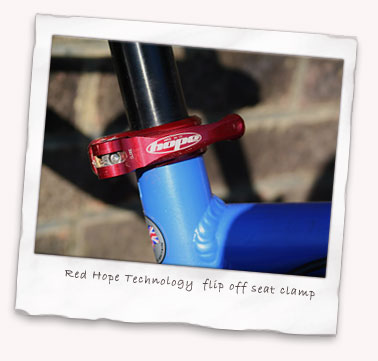 In contrast to the Salsa it has a thumb wheel for adjusting tension (rather than an allen key adjusted bolt) and the styling is much more industrial, consisting of intricately milled surfaces throughout. It appears (I haven’t checked) to weigh less and certainly looks as though it has much less material – the clamp band itself is much shorter and the clamp arm, though similarly long, is also narrower.

On paper then and in the metal these clamps look as though they would offer similar performance. Unfortunately it just hasn’t worked out that way.

The Salsa has been absolutely superb from day one. The clamping action is smooth and effortless and the wide clamp band means you can exert a lot of friction on the seat post without needing to tighten the thing as hard as you can. This means that in my experience the seat post just does not slip. Nor does it creak or prove difficult to release when I actually do want to drop my saddle.

In contrast, the Hope has been a disappointment as it just hasn’t managed to do what I want it to do. Clamping forces need to be much higher thanks to the narrower clamp band and I really hate over-tightening these things. It’s creaked, slipped repeatedly no matter how much I tighten it and proved a real pain when it comes to removal. So despite looking like a jewel on the bike I won’t be keeping this product much longer.

Instead, I’ll be tricking out my Orange with a red Salsa flip-off seat clamp like the pink one on my singlespeed. I know the industrial look of the Hope suits the Orange better but I really like the Salsa sexiness myself and at least I know it will work perfectly. After all, when you have a Five frame the last thing you want is something that will creak!

I’ve tried, I feel guilty not being able to recommend a British product, but in this case my experience says the Salsa is a better product.

Filed under Components, Reviews in March 2010