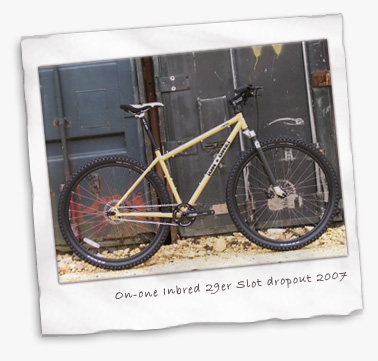 It’s the curry from the night before and a strategic lighter. The effect is illuminating if somewhat dangerous and short lived. Well, I thought I better get the gag in before Matt got there.

Singlespeeding. Hard work for your average MTB rider. Maybe not around the Surrey Hills but the Inbred slot dropout 29er from Calderdale’s second largest bike manufacturer, On One seems to make life a little quicker. Well that was certainly the observation from both myself while riding it and Jem as he watched me disappear into the distance. Then things reversed as I let him have a go.

We pondered this phenomenon over hot chocolate and cake atop Box Hill and concluded that the bike not only has one gear but really does have one speed that works.

Could it be that gears make us lazy?

I know for me that gears seem to be a hazard at the moment. 2 mech hangers down on my Orange Five (from Calderdale’s premiere bike manufacturer) over the past few weeks, I managed to swap onto my On One 456 that Jem was trailing me on and destroy the front mech with a chain failure as well. Ka Ching!

The only problem I need to deal with now is the fact I’m destroyed after 8 miles while riding the singlespeed.

Filed under Bikes, Reviews in June 2007