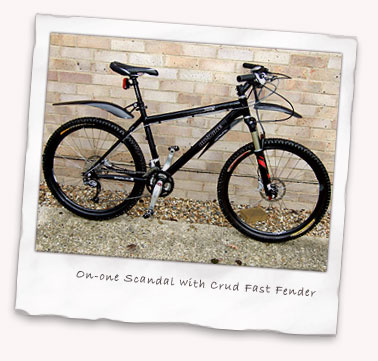 I squatted the Bumble bee and a black whippet has emerged.

What am I rambling on about? The Marin Nail Trail frame has been packed away and an On-One Scandal has come into the stable.

I feel like a bit of a fraud to be honest, after all steel IS real. But I was drawn to a frame that worked really well with a shorter fork and looking around I couldn’t see anything at the price that I wanted quite as much as the black anodized ScandAL frame.

I do blame Barrie to some extent for this. He’s been pushing me on up hills and generally encouraging me as I’ve pushed myself to speed up with the D2D preparation. I’m a bit of a grinder and that’s how I manage my bikes uphill by grinding the climb into submission. Barrie doesn’t grind the climb, he floats over it at speed! I doubt I’ll do that ever but I’ll do my best to turn the grind into a light rub down (something in there for you Lee, I’m sure!)

So, what of the ScandAL then having got my justification out of the way. Well first thing I’ll say is that all the bollox about how comfy and steel like this frame is, is total bollox, it’s as hard as nails in my opinion. But I don’t think that is such a bad thing. It’s lively, responsive and gave the trails a bit of zing I’m not used to.

I’ve built it with some of the cheap Reba Team that are knocking about at the moment so it’s a light-ish build with scope to be made lighter when thing wear out and funds allow. Initially I thought the whole bike was going to throw me off at the slightest bump but once I was into it and began to trust the bike and the tyres (gone back to Continental Verticals which are still great!) I was flying. I think some of the guys behind me will agree as I led them on a run round Leith Hill, that took in various bits of trails which I have no name for but included bits of Chocolate Jesus. The ride continued in a similar vein.

After returning from D2D I took the ScandAL out for it’s 2nd ride over to Newlands Corner. I’d fitted it out with a new Crud rear guard as well as one of the new Crud Fast Fenders courtesy of Mr Crud, more of this in a dedicated article.

The ScandAL continues to fly and I’m getting more used to the harder rear end. But when you put the power down it shoots away and continues to as long as my legs and lungs can carry on. It’s fast and responsive in the single track and a real buzz to ride round the Surrey Hills. I’m getting a much clearer picture now how well 100mm of travel works for this area although it did make for an interesting, but not too scary, trip down Blind Terror (or is it BT2, I’m totally lost but I mean the one over the road on it’s own).

Filed under Bikes, Reviews in October 2009