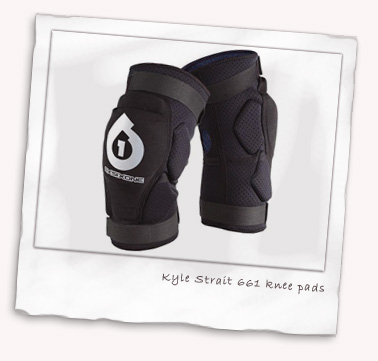 Just before our trip to Afan I started thinking that perhaps the time had come to consider some protective clothing. Picking up the odd scrape here and there made me realise how glad I had been at not injuring myself more painfully and the thought of spending any extended time off the bike spurred me to action.

It’s not easy trying to find something that fits the bill. Knees were a good starting point but the range of options available to someone who knows nothing about this kind of thing is quite daunting.

My main criteria was not too bulky, should be wearable all day but with plenty of protection particularly round the sides as I have an old injury to my IT band on the outside of my left knee that I’m anxious not to exacerbate.

661 is a company I’ve heard good things about (love the idea of their top of the range padding that is flexible but hardens on impact), I even have a pair of their winter gloves which are pretty good. Plus, Colin has been running a pair of 661 Kyle Strait knee pads for a while now (errm, ever since his off last year in fact!) so he was a good source to ask for feedback.

Overall, I’ve been pretty impressed. The Kyle Straits come with substantial padding over the knee cap as you’d expect, but also have several smaller pads either side of the knee. They’re a reasonably flexible material which probably don’t offer quite as much protection as a hard shell but seem plenty good enough, plus you can add shin protectors too as Jem has done. All in all, a pretty good compromise of protection versus ease of use.

The pads are put on over the foot and slide up the leg into place, so probably not a good option if you plan to ‘pad up’ when you get to the top of the mountain or if, in my case, you’re incapable of organising yourself so you put your pads on before your shoes. They’re secured by 30mm wide velcro straps top and bottom which do a good job keeping everything tight and in place even if like me you have legs like pipe cleaners. I’ve got the medium size by the way and they’re just right. 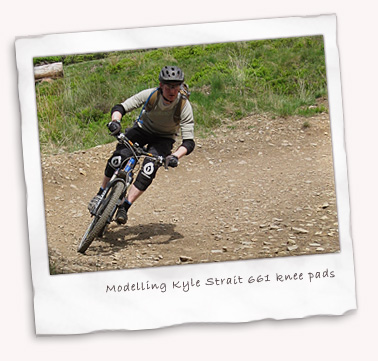 In use, it’s an odd feeling at first. You feel even more gladiatorial than usual as you dress for the trail but once on the bike the pads are pretty unobtrusive under baggy shorts, making them look from a distance like 3/4 trousers. At first your knees seem improbably hot (but winter rides as a result are likely to be much more comfortable). After a while though you get used to them and effectively forget they’re there, in fact I rode with them all day in Afan without really thinking of them.

Since then, I’ve tried to ride with them on our local rides, for two reasons. I’m undecided if they really are comfortable in the hot weather we’ve had (on balance I think they are) and secondly am worried about the Law of Sod whose almost inevitably is going to strike just as I decide ‘Oh, it’s OK I’ll just chance it…’.

But a big thumbs up from me for these knee pads, at the end of the day under £40 for serious knee protection is well worth it I reckon.

Filed under Clothing, Reviews in June 2008