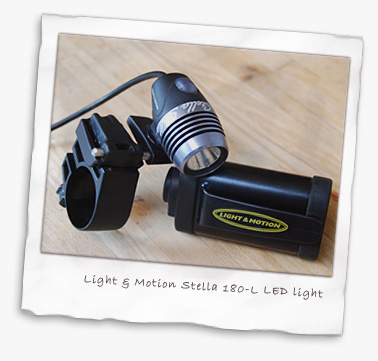 Due to the time of year there have been a few reviews of lights from mole HQ. You may recall that Dave in a mad scientist kind of way went to his shed armed with various bits of electronic gubbins and probably a helper named Igor.

After the national grid flickered somewhat he emerged with his own custom set of HID’s that kicks out a colossal 1850 lumens.

I’ll concede Dave rules the woods and review something a little different. For my road commute I’ve been using the latest offering from Light & Motion, the Stella 180 L. To date I have managed to get by with a little LED that blinks away forever but was probably only noticed by a glow-worm looking for a mate.

That was OK at my prior address as it was a short distance on well lit streets. Now though, the commute is much further and encompasses unlit sections, so I found myself wanting for something with a little more punch.

I already own a HID from L&M for off-road duties which is great, but overkill for the road plus the battery only lasts about three hours or so. In darkest winter that’s only enough juice for one day of my commute before needing a recharge so I decided to try and find something between the two extremes.

Some description and specs

The Stella 180 is a single LED that throws out, yup you guessed it, 180 lumens in its highest setting and lasts 5 hours, but it has more conservative settings that reduce output and lengthen the burn time up to 40 hours on low or 100 hours blinking.

This seemed a neat feature for my commute where I could eek out some decent time between charges. I’ve found I just leave it on medium all the time which copes for 10 hours and easily does me a week.

I chose the lithium ion battery, a little extravagance that costs a bit more over the NiMh version but is half the weight. The battery is about the size of a deck of cards but resembles a slightly melted Toblerone. The lamp itself is very neat and is not more than the size of a camera film canister (remember those!).

What’s with the mount?

Mounting options included both helmet and handlebars. The bar mount is my main criticism. The lamp attaches to a base that is independent of the mounting bracket and joins it via a metal rod. The only benefit I can see is that you can (sort of) centre it over the stem.

The main problem though is that it never stays at the right angle and I have to have the bracket rotated forward to stop the light pointing skyward. As bars tend to be round I think just rotating the bracket is more than adequate and it seems a bit of pointless over-engineering especially as you can adjust the side-to-side angle anyway with a screwdriver.

How does the Stella 180 perform?

Can you ride in the dark in unlit roads? Yes, definitely. Can you ride offroad with your mates all on HIDs? Yes but you might get lost in the shadows. I think its niche is commuting where you need some power but don’t want to be forever recharging your battery.

As a helmet light I expect it works well but I must confess I have been too lazy to move it from my commuter bike in the mad dash to reach the night ride in time. That is mainly because switching from one to the other requires faffing with a screwdriver. Also, it has a separate battery whereas dedicated helmet lights manage it in one neat little package without the fuss of cables.

Overall a neat setup but I’m not a fan of the bracket. I can’t see me bothering to switch to the helmet option as it’s really one or the other. It’s definitely a good solution for commuting though where it’s often a tricky balance between light and run time.

I emailed L&M before hand as I had a couple of questions. L&M did not respond to my email. For pitys sake people, if you have a website and offer an email address then please bother to reply.

Apparently their customer service is generally good so I won’t hold a grudge this time as both products I own hit the spot but choose the right one from their excellent selection.

Filed under Lights, Reviews in March 2008