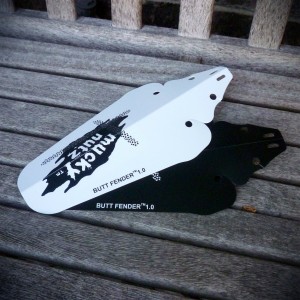 At one point today, as I looked out the window, it seemed that the rain was coming from several directions at once. Not just down, but horizontally in one direction and diagonally from another! Weird. But every cloud has a silver lining and the upshot of it being the wettest April in years is the chance to test some mudguards.

Butt Fenders are rear mudguards newly developed by Mucky Nutz. Shane sent me a couple for test recently but since they arrived during drought conditions it’s only recently I’ve had the chance to try them.

In truth they are not precisely mudguards, rather a kid of vestigial tail fixed to your saddle. The idea is they keep mud at bay in a ‘barely there’ way while presenting as little impediment as possible when hanging your back side off the saddle.

The barely there part is an easy tick, they really are pretty unobtrusive, particularly the black version that Dave was trying. This will come as no surprise to riders with the Mucky Nutz Fender Bender on the front of their bike which are well known for providing stealthy mud protection.

Similarly, the Butt Fender cause very little trouble in off the saddle moments as they simply flex downward and out of the way. They are quite flexy so even if you snagged your shorts on them they would just bend underneath you as you sat down.

The Butt Fenders fix under your saddle using some cleverly positioned holes in the plastic material they are made from, taking seconds to fit, even if you need a few moments of head scratching. They weigh just 19g if that sort of thing bothers you so would be an ideal race ‘guard. 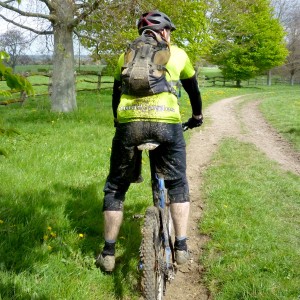 What you’ll see from the photo of my (rather tidy) backside though, which was taken at the end of a 29 mile ride to Newlands and back, is that the Butt Fenders seem to follow Pareto’s Law. Or, in other words, the 80:20 rule whereby they keep 80% of the dirt off, leaving 20% to get through. Some might argue the other way round judging from the picture.

It would be wrong to jump to conclusions though, parts of Sunday’s ride was through large hub deep puddles filled with clay and water so quite a big test. I wouldn’t expect the small Butt Fender to keep me clean in these circumstances and while the trail looks dry in the photo, in truth there was plenty of mud about. My saddle remained completely free of mud and even if my lower back got a light coating of mud there was never enough to wet me.

Another factor to consider is how high my saddle is from the rear wheel, just my particular set up but one which will vary from rider to rider. A different rider with a saddle closer to the wheel can expect the Butt Fender to catch more of the dirt.

Overall I’m quite happy with the Butt Fender and will use it in those in-between conditions where there’s lower mud levels to worry about, as it’s such a discrete device and so quick to fit. For extensive mud, well, you really need something a bit more comprehensive although in an emergency I’d use this as it’s certainly better than nothing. For less than £7 it’s something of a bargain.

Filed under Accessories, Reviews in April 2012