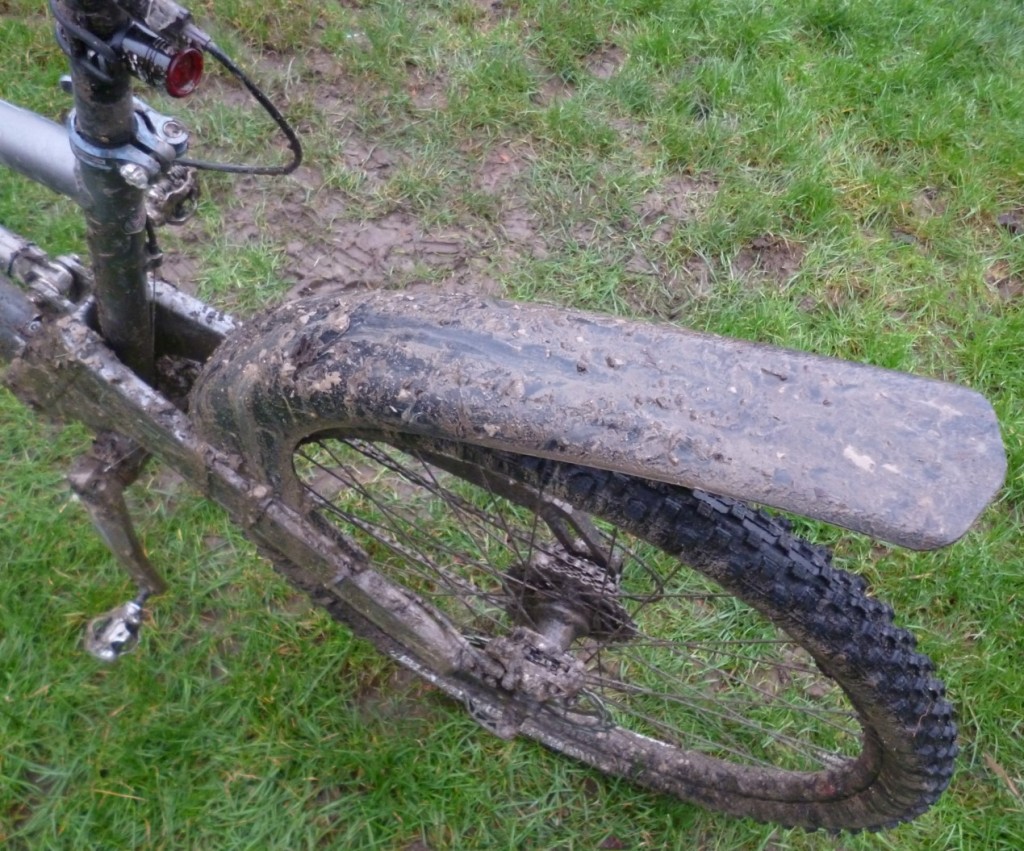 Well at least the recent torrential rain has been good for one thing – testing mudguards!

Having recently come back from rides looking like I’d been caught in the wake of a muck spreader or strolled into a monochrome Jackson Pollock re-enactment. It was time to try out a new mud projection strategy and it’s not often someone brings out a mudguard specific for your bike model. So I stumped up my £18 for the Mudhugger Orange 5 mudguard and a far less reasonable price for a Powa front mudguard.

Last Sunday (12th of Jan) didn’t actually start out as an ideal day for mudguard testing, or staying upright, since it was dry and frosty. However once we’d had the long wait Lloyds unfortunate accident, the sun came up and the melting trails provided a good testing mudfest.

Backtracking a bit. The Mudhugger is somewhat different to the normal Crud type, seat post guard, in that it’s designed for full suss bikes and fits onto swing arms to follow the wheel. The piece of plastic was reassuringly solid, supplied with some thick clear tape to protect the frame and quickly zip tied onto the top of the swing arm. A quick squish of the swingarm and ride round the block showed that I’d placed the guard too close to the seat tube since it was catching and it needed positioning nearer the wheel. It was a 5 min job to reposition. 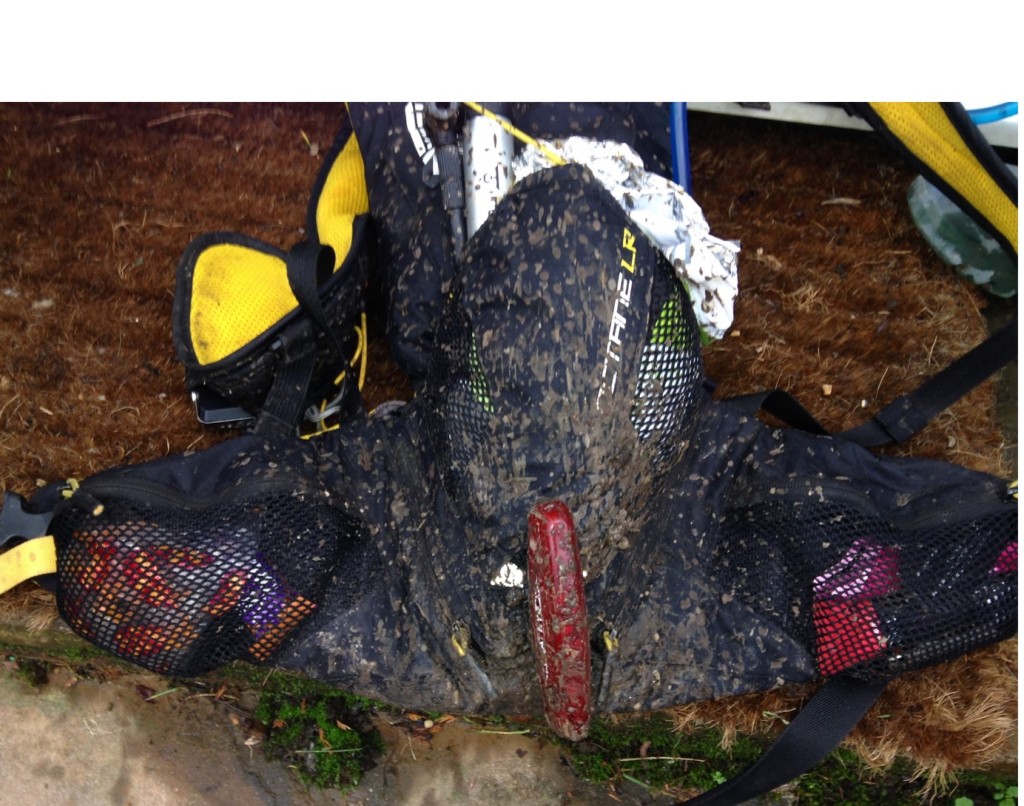 The advantages of fitting the mudguard on the swingarm are immediately obvious. The guard is always the same distance from the wheel, hopefully always ideally placed to catch the dirt. You can’t knock it sideways out of the way of the wheel (how many times do you find you guard facing 45degrees to the bike?), there are no moving parts (how many Crud guards have I had fail due to the clamp slipping… too many) and there is no fitting difficulty if you are running a dropper post.

The Sunday ride got particularly muddy as we came back over Ranmore, splashing through the puddles on Dearly Beloved and trekked through the seriously gloopy field edge along Wiggly Woods, to Bocketts farm. 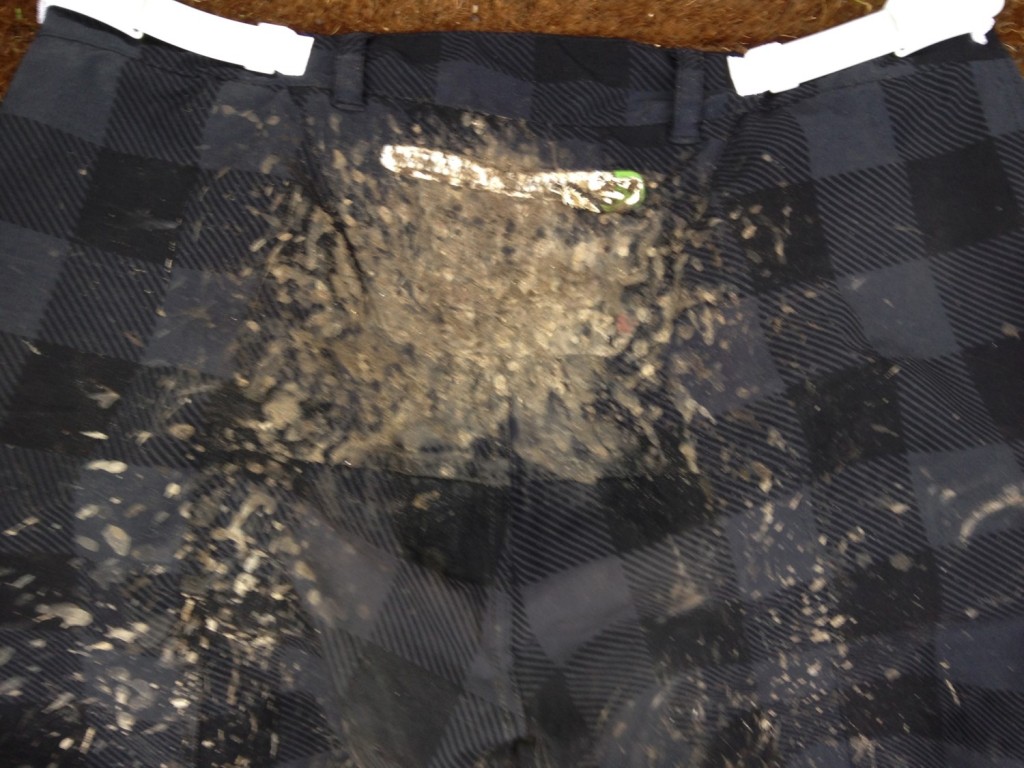 Regrouping at Bocketts we compared our mud protection strategies. My shorts / camelback were fairly well covered. The Mudhugger mud stopping prowess was a touch disappointing to be honest.

Perhaps I needed to look to position the mudguard closer to the tyre but I seems to be no cleaner that I was from my usual Crud Guard?

The Mudhugger itself seems very robust but maybe a touch less effective at stopping the flying crud than I’d hoped. I think that it has promise though.

At the same time as testing the Mudhugger I’d spent a far less reasonable £49 ( a moment of weakness!) on a Powa mudguard for my Revelation fork. The Powa mudguard is a substantially built mudguard that fits onto specific fork braces. A metal clamping system holds the mudguard rock solid. Fitting was 5mins tops. The Powa guard also has to be, in my view the best looking front mudguard out there. 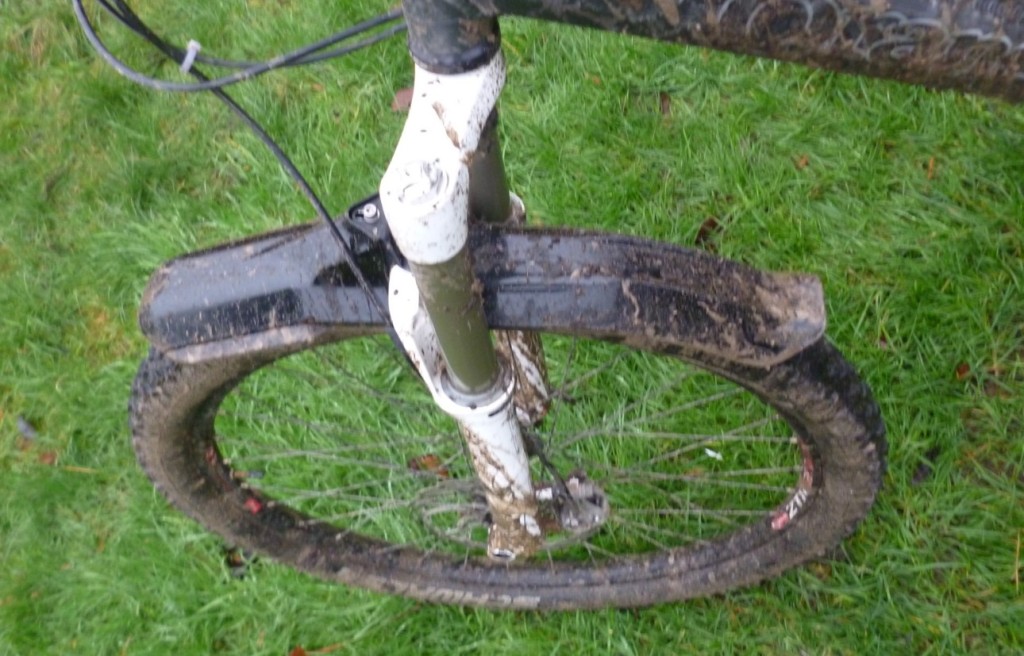 Previously I’d been using a simple fender bender. Not only are these cheap but they also stop the mud flying up onto your fork stations, protecting these expensive parts of your bike. However I was finding that I was getting a serious facepack of flung up mud even with the fender bender XL. Hence the monetary splurge for the Powa guard.

From a mud fling stopping point of view the Powa mudguard was a disappointment as you can see from my jersey, I was fairly well splattered.

The face and jersey comparisons of front mudguard strategy at Bocketts was particularly revealing with much bigger differences in cleanliness than backs. 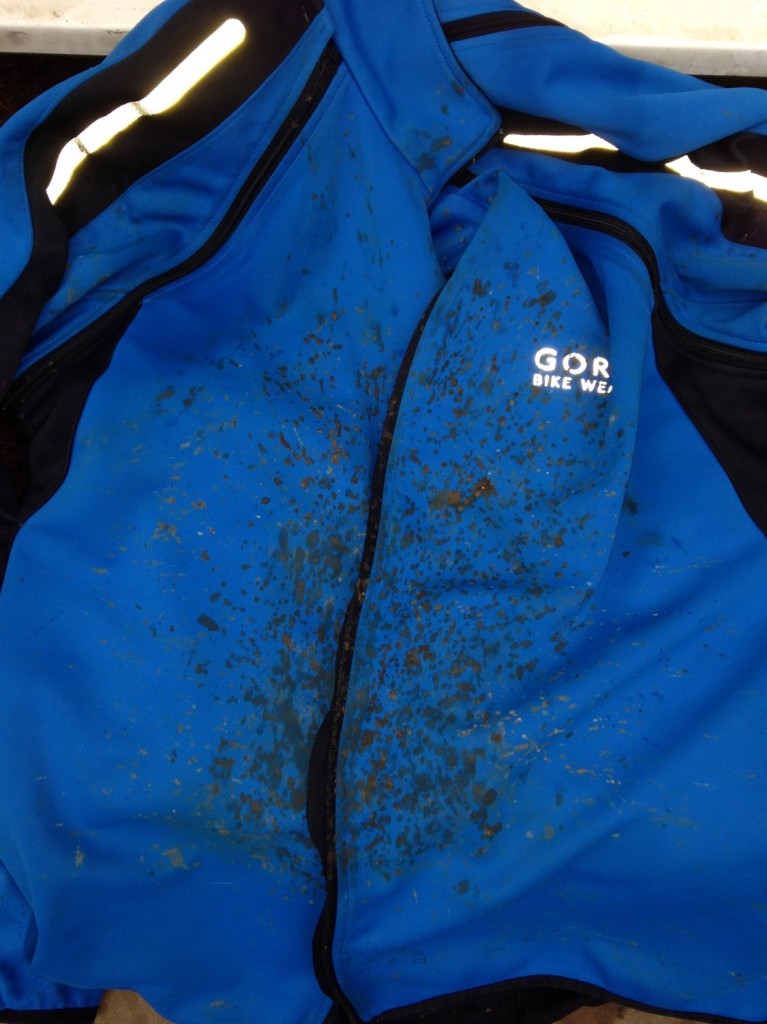 So whats next? I think an experiment to re-position the Mudhugger and back to the shops for a downtube mudguard to compliment the Powa front guard. Maybe then I’ll come back from rides looking pristine… well apart from being covered from the knees down in cack!

Filed under Components, Reviews in January 2014