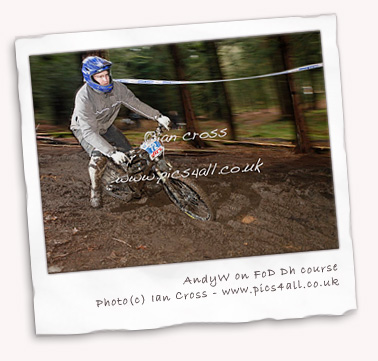 The line in front of me is getting smaller, the bib numbers are counting down. My heart’s pounding and the adrenaline is flowing. The last 20 seconds of grace pass rapidly and I’m in the gate. Suddenly the anxiety clears and all I can see is the clock counting down. The worries about line choice, gear problems and the sea of mud disappear and as the clock reaches 4 seconds, I stand on the pedals and cross the start line…

But that’s just the beginning of the end, the culmination of a week of nerves, tyre debate and mud.

This was the year I decided to give DH racing a go. Starting DH racing in your mid 30’s is probably not the best age to begin, but then one of the things I like most about mountain biking is that surprised look on people’s faces when you tell them you’re off to throw yourself down a Welsh mountain. So why not.

I decided to start simple, a race that if I didn’t do well at then I wouldn’t have lost much and could chalk it up to experience. With this in mind I entered the 661 Mini DH race in the Forest of Dean on 6th December.

I’ve never done mountain bike racing before but used to work on a race car team as a mechanic and did a bit of ski/snowboard racing at Uni, so one thing I did know was that preparation is key. The race car bit for bike prep and the ski/snowboard part for course prep. So in the run-up to the race the bike got cleaned, tyres got changed and kit got organised.

Nobody in the UK will disagree that November has not exactly been dry and December is not looking that great for dry trails either. So about a week beforehand the constant rain was a clear indication of what was coming. One course, three hundred riders, two runs, plus practice, works out to somewhere over a thousand runs. So mud was a given. The question was just how deep would the mud be?

As it turns out, very deep mud was the answer, but more on that later. I left home on Saturday morning. Family commitments meant I arrived about 2.30pm, collected my race board and got the bike out of the car. I met up with my fellow rider, Simon, and we pushed our bikes up to the start of the course. The light was fading fast under the constant cloud and rain, so we decided to get some runs in before it got too dark.

There was already a lot of mud, plenty of off-camber roots, switch backs, road jumps and the odd tree to avoid. The Maxxis Swampthings I had bought the week before had bags of grip and my tyre pressures seemed good. The biggest issue was the encroaching darkness. The trees were so dense in the middle section you could hardly see the track, let alone pick a line.

Second run was no better with it being even darker (the 20 minute push up a steep hill certainly didn’t help). I bounced down feeling shattered, and as it was now raining heavily we headed for the jet wash and the pub.

Over beer we discussed strategy. General plan was to get there early and walk the course and talk lines. First run down – put in a solid steady run. Second run – go for it.

Sunday dawned and we arrived at the start just after 8am, managing to get a parking spot low down the road/river. It had rained solidly over night and was still raining when we arrived. Waterproofs on and we set off to walk the course detouring slightly for a bacon and egg bap from the cafe. The overnight rain had not helped conditions and even walking up the hill proved tricky with me falling flat on my back just walking the course. Lines debated, we headed to the car to unload the bikes. Practice was well under way by the time we got back and the course was suffering.

My first practice run was pretty solid, a steady pace and moto styling round the corners. Tyres holding well. On my second run I tried a different line into the first bend but lost speed over the hump. Hitting the bottom section my bike stepped out to the side but I held on only losing speed into the tabletop. My gears were also slipping so I could get no power down. Things were a bit more ragged but everything held together and at least you could see the course.

Rather than wear ourselves out we headed to the cafe for tea and to warm up. No point cleaning the bike as it would be filthy before you reached the top of the climb. The rain had finally stopped and thankfully blue skies were beginning to appear and the sun even made the odd appearance.

Racing was scheduled to start at 11am, so we headed to the finish area to watch the action. The start of racing was delayed due to problems with the timing gear and only really got going about 12.30. By then we had wandered slowly up the course watching the occasional racer coming down and falling over in the deep mud. Watching the racers it was clear that the mud had deepened significantly, and judging by the sideways action we saw, getting down in one piece was not going to be easy. The good guys were really fast, holding their lines and flying through the sections.

Having reached the top fire road we took our time watching riders as the racing finally got going in anger. A brief play with my gearing revealed that only one gear was not slipping, despite having cleaned the cassette. Fortunately it was the right gear for the course so I stuck it in that gear and vowed not to change it.

We sauntered up to the start gate, joining the other 150 or so riders waiting to go.

Shortly after we arrived they announced that there was only time for one run as it was too dark to see on some sections of the track. So then I had to decide whether to go steady or flat out. You’ll find out which later. While we were waiting we went to look at the starting gate. For those who don’t know, here’s how it works. The organisers line you up in number order for the seeding run, and in run two it’s ordered by your first time (the slowest going first). There is a 20 second gap between riders; the clock counts down from 20 and when it gets to 4 seconds you can cross the line. As soon as one rider has gone the clock starts counting down and you’re up. If you go too late, you miss your slot.

Simon was a good 20 minutes in front of me (him being in the senior category and myself in the masters), so when his time came I cheered him on through the first corner. Then it was a case of waiting for my call. The time passed quickly, though the rain began to fall again just before I started. My nerves were building all the time, I was going over the course in my head and trying not to think about everything that lay ahead.

And that takes me to about where I started all this.

Over the start line and straight into a sea of mud, heading to the dryer right hand side of the course, brake hard and take the inside line using the stump for traction, miss the second stump and over the lower end of the hump. Brakes off and down into the deep mud, using the well ridden groove to carry you through. Stand on the pedals and over the next hump holding the right hand side, as straight as possible towards the road drop.

Dropping into the road the suspension bottoms and then you’re though and braking hard for the sharp right with the off camber roots. Stay right and pedal over the hump aiming left to avoid the tree. I lost a bit of time as the wheel slid into the tree, before pushing into the dark middle section. Aiming between the tape I hit a right turn and disaster struck. My front wheel slid out and I was thrown down the bank.

Back on my feet I fought my way back up the bank, grabbed the bars and spun them straight, checked for anyone coming down and leapt on the bike and pedalled on. Thoughts of the fall banished, I went cleanly through the final dark section then dropping into the churned up mess of the steep banking. The back wheel was in one groove and the front in another as I steered over the drop. Fast across the roots, bouncing off the tree in the middle and into the hairpin.

Chuck the bike into the gully and try and keep the pedals level to avoid the stumps. Aiming at the marshal I dodged going over the berm, broke hard right to keep out of the deep mud. Sitting back gave me traction as I sprinted towards the tabletop. Pump the transition and into the berms, nice and fast through them and plenty of speed for the road jump. I hit the smaller jump, on line for the berm. Hard left, hard right and flat out over the finish line.

I was laying over bars panting knowing I had pushed hard. Simon wandered over and said I had looked fast. 16th place on the board, so I knew at least I wasn’t in last place. The next rider crossed the line about 10 seconds after me. To be honest I was just pleased he hadn’t caught up with me.

We headed to the bike wash and I was still feeling pumped. Probably boring everyone around me with my excitement. Clean bikes loaded into the cars and warm clothes on we headed back to the finish line to check out the results. I finished in 39th place out of 50, 2:06.8, 38.521 seconds behind the leader; and the guy behind me? 9th place (1:38.3). Simon placed in 30th place (1:42.0, 17.0 seconds behind the leader).

Happy? Absolutely! I didn’t hold anyone up, I hit the lines I wanted (OK. So I’m ignoring the crash) and I didn’t finish last. And if I hadn’t crashed… well who knows. But that’s racing.

Heading home I had time to reflect. The weekend had cost me around £130 plus tyres and a few other parts for one 2 minute run. Not the best value for money.

Should I do it again? Definitely! There’s no feeling like it, just you against the course and the clock.

Roll on the next one!!

Filed under Racing, Reviews in December 2009