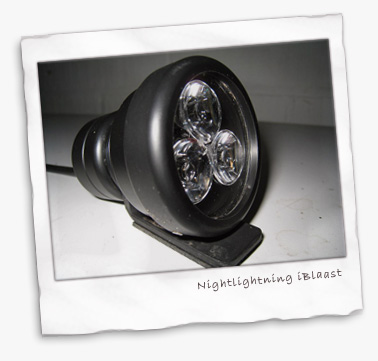 I recently bagged myself a bargain with the NightLightning iBlaast LED light from New Zealand. Here’s what I found…

Despite not getting out for night rides for some time (until a baptism of fire with the Moles just recently), night lighting seems to have become a bit of an obsession for me and for some time I have toyed with various ideas and built several prototypes.

Improving on my 6 volt Electron set up would not be too difficult and my wishlist came from direct experience (and frustration) with them:

The Electrons scored badly in all respects so it was worth putting in some work. Most of this work and tinkering has resulted in an excellent head torch, superior to the Joystick, for a fraction of the cost (more on that in another post, where you can have a build list and instructions on DIY build).

However, I couldn’t decide on how to achieve all of the above with my homebrew bar mounted setup and was surfing late one night.

Buried quite deep in a Google search, I came up with this beauty – the iBlaast! from NightLightning. A neat 3 LED setup, using the latest LED technology giving up to 720 lumens at your disposal. An important feature I like is that this unit is fully upgradeable, so when they are making 600 lumen LED’s, Dave had better watch out as I’ll be able to rival his mobile x-ray unit!

The website looked promising, feedback looked excellent and a phone call to Eric in New Zealand (at midnight UK time from my garage so as not to wake up other family members and so the wife didn’t know) convinced me this was the way to go.

Having already got a 14.8V li-ion battery and charger for a prototype, all I needed was the light unit, bar mount and connectors. Eric duly obliged (he has no problem whatsoever in supplying individual parts for own projects, etc) and a mere week later the parcel arrived. UK carriage was only £11.

I wasn’t disappointed. The build quality is second to none and there really is a very clever box of tricks driving the electrics, giving options for:

All well and good but what’s it like on the trail? Well all I can say is buy one! The images on the website are genuine. The depth of vision is fantastic and also gives a very wide, consistent beam so you pick up everything on the trail. You can easily flick the brightness down if you want but to be honest, with a 4400mAh battery, you get 5 hours on full whack so why bother?

Due to the effort Eric has put in on construction and quality, I can’t see there ever being an issue with reliability. The other added bonus over HID or halogen is that LED’s are virtually bomb-proof and even if one fails, they’re £6 to replace. The switch is a touch sensitive item on the back of the unit.

The only slight niggle was with the bar mount. I couldn’t get it to grip the bars adequately so I swapped the mounting plate from it to one lying around in the garage, as per the pics.

So, if you are considering upgrading, do consider the Blaast! range. See their website at www.nightlightning.co.nz for the various options and more detailed information on burn times.

More photos of the NightLightning iBlaast LED light are available on the MuddyMoles Flickr stream.

Filed under Lights, Reviews in November 2007