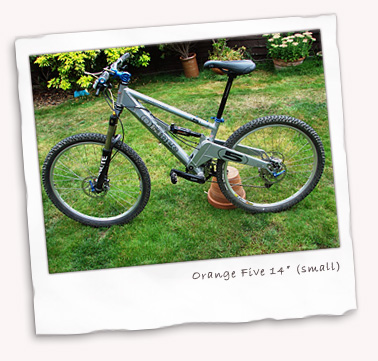 The search for something with full bounce has been continuing for Debbie—my better half—for a while (see ‘Orange Five Diva review – one (not?) for the ladies‘). Many bikes have been tested (Orange, Specialized, Trek, Kona) and although she knew she wanted a full susser she didn’t want to spend a huge amount on a new machine, so the trawl through eBay began.

I checked every week for ‘small suspension’, ‘womens suspension’, ’14” suspension frame’ and every other permutation you could think of until the proverbial hens teeth finally appeared.

What was it that we finally unearthed? It was a 2006(?) 14″ Orange Five. This was the only one that I’d ever seen for sale and although it had an ‘interesting’ spec, the 14″ geometry is the same as the ‘long’ ladies 14″ Orange Diva. The advert said hardly used.

With fingers crossed, in went a bid and a week later I was opening a bike box with a certain amount of trepidation. I needn’t of worried. The description was spot on and Debbie said that it looked like one of my bikes after about 2 weeks use.

As you may have seen, just a week after getting the Orange Five I broke my collarbone. Debbie took this news with good grace ‘great you can look after Alex (our son) and I can get in loads of biking’. Hence the race was on to get the bike just to her liking ASAP.

So what of the ‘interesting’ spec? Well as you may have read about our earlier disappointments with demo’ing an Orange Five Diva, this was another great bike fighting to overcome a strange spec. Much of the ‘new’ bike was spot on, XT gears/brakes, Thomson seatpost/stem, FSA carbon risers (not too wide this time), Manitou front/rear shocks, Hope finishing accessories all colour co-ordinated in blue. 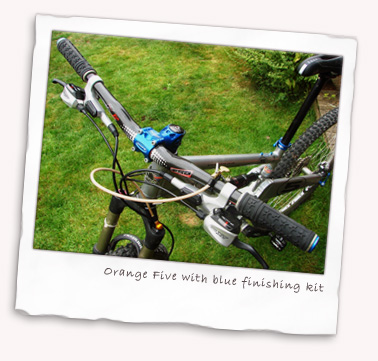 What was odd? Well again (Orange Five Diva!) this was a very small frame with 175mm cranks – why do people do this!? These were soon replaced with Deore Hollowtech 170mm cranks. Plus it came with a 90mm stem, again absolutely too long for a bike of this size. This has been replaced with a fetching blue 60mm Hope stem (another eBay bargain).

Also the wheels/tyres (Deore hubs, Weinmann rims, Continental Gravity 2.3 DH tyres with wire bead) although fine in terms of performance are seriously heavy on a bike for mainly XC duties, especially in this small size. These were swapped for the LX/Mavic 717 wheels from Debbie’s HT. The geometry was now spot on, exactly matching her Trek HT, plus the bike was ~2lb lighter!

After all this fine tuning, the great quality bike fighting to get out of the strange spec is finally there and the well known qualities of the Orange Five (see how many Moles have one!) are finally apparent.

Debbie is now raring to go with the Femoles. So if you are out in the Surrey Hills on Saturday mornings don’t be surprised if you get passed downhill by a lady on a silver 14″ Orange Five. Just ask Dave about Debbie’s speed downhill – and that was on her HT.

Finally just to say that I seem to be one of the few Moles without an Orange Five. I’ve always wanted one and now we have one. It’s just not the way that I expected it to happen!

Filed under Bikes, Reviews in September 2009